As part of our month-long salute to Barry Goldwater’s controversial thirty-minute political advertisement, Choice—which would have aired on October 22, 1964—CONELRAD is pleased to present the screenplay for this unforgettable campaign cult film. As produced, the movie resembled a Frank Capra propaganda production directed by Russ Meyer. Not surprisingly, after several days of negative headlines, it wound up being banned by the candidate himself.

Before we present the script, a little background on the writer and what he was trying to accomplish.
SCREENWRITER OTIS CARNEY

As the 1964 presidential campaign was in full swing, Hollywood writer Otis Carney (1922-2006) received an urgent call from a faction of Barry Goldwater’s staff to help crank out a screenplay for a movie that would portray Lyndon Baines Johnson’s America as a declining empire of immorality, corruption and sleaze—contrasted, naturally, with the riot-free promise of a Goldwater presidency. 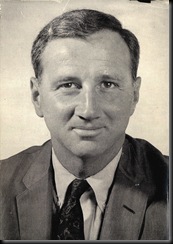 Carney, a successful network television scribe (Dragnet, Zane Grey Theatre, The Dick Powell Show) and Goldwater supporter, obliged with a script that became the blueprint for one of the most amazing campaign movies ever produced. Unfortunately, he did not live to see the completed work streaming on YouTube. And the thought of his screenplay being published on the Internet probably never even crossed his mind. But for the Choice completist, it is the only place to start...
Choice Script
Posted by Bill Geerhart at 4:33 PM