A CONELRAD.com interview with Robert Murtha who was part of a team that installed Fallout Shelter Signs in Pennsylvania and New Jersey in the fall of 1962 (during the Cuban Missile Crisis). 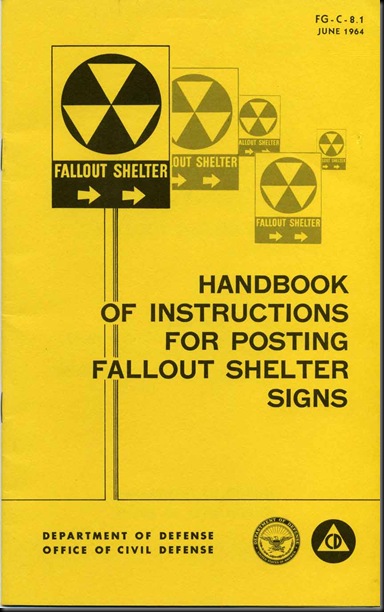 Beginning in 1961, millions of Fallout Shelter Signs were posted on structures and in spaces designated for emergency use by the public in the event of a nuclear attack. Trained survey teams carried out this activity as part of what was officially known as The National Fallout Shelter Survey and Marking Program. In October of 2004 CONELRAD.com editor and co-founder Bill Geerhart conducted an e-mail interview with a veteran of this uniquely Cold War duty, Robert Murtha. Mr. Murtha provides an interesting window into what it was like to be on the Fallout Shelter detail. 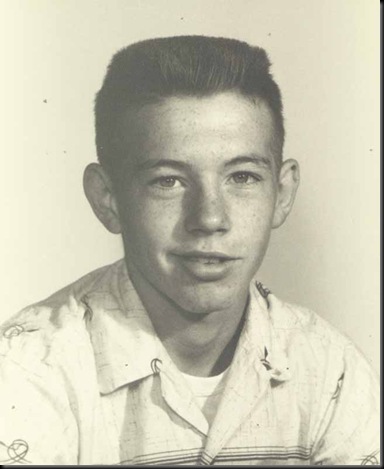 CONELRAD: Could you tell our readers how you came to be involved in the National Fallout Shelter Survey and Marking Program?

MURTHA: I attended Drexel Institute of Technology (now Drexel University), Philadelphia, PA from 1961 to 1966 as a civil engineering student. The college had a 5-year engineering cooperative program in which students attended classes for 2 quarters and then worked in engineering related jobs for the next 2 quarters.  Following my freshman year, I worked the next 6 months (June thru December 1962) for the Philadelphia District of the US Army Corps of Engineers (COE) as a “Student Engineering Trainee”.  In August, I was assigned to review the fallout analysis performed by several Philadelphia area AE firms on buildings in the southeast Pennsylvania and New Jersey region.  In September, myself and 3 other trainees were assigned to install fallout shelter signs in approved buildings in the Philadelphia area.  Each trainee combined with a laborer from the Army COE dredging operations to form a sign-posting team.  During October, November and December, the teams traveled to northern New Jersey to install signs in approved buildings in the Newark-East Orange vicinity.  We would drive from Philadelphia to northern NJ on Monday mornings and return Friday afternoons.

CONELRAD: Do you recall what your initial reaction to the sign was? Did you think it looked odd or futuristic?

MURTHA: I don’t remember reacting to the sign in any odd fashion.  I remember taking some signs home and giving one to an interested neighborhood buddy for his bedroom.  He probably still has it.

CONELRAD: Did you have an appreciation of the significance of your task or was it just a summer job? Did you take the Cold War seriously?

MURTHA: It was just a job assignment.  I didn’t take the cold war that seriously.  Of course, as a high schooler in that time period, I performed the usual duck-under-your desk drill many times.  The friend that I gave the sign to had a designated area in his basement, which they converted to a shelter.  After they switched home furnaces from coal to heating oil, his father, a WWII army veteran, had converted the coal storage area to this small fortress. I think he had blocked off the window and maybe stored some food and water in there.

CONELRAD: Could you describe your job duties? Did you do the actual sign posting?

MURTHA: Each morning, the teams would meet at a building in East Orange, NJ to get their building assignments for the day.  Supposedly, our COE supervisor had previously contacted a representative from each building and gotten their okay for posting signs in their buildings.  Our automobiles were vintage army drab-colored stick-shift Chevy sedans (cars which are now considered to be valuable classics).  The laborer did the driving.  Upon arriving at the building, I would contact the person-in-charge.  This could be an apartment supervisor, school principal, church administrator, etc.  Usually, this person would be aware of our visit and allow us to post the signs both outside and inside.  As I recall, the outside signs would be posted close to any entrances.  The inside signs were located on wall surfaces with the intent to lead people to wherever the designated fallout shelter area was (usually in the basement far away from any exterior openings).  As necessary, we would stick arrows on hallway/stairway signs to give sufficient direction to the approved shelter area.  We would also stick a number on the final sign, which corresponded to the approved capacity of the shelter (e.g., 250 people). 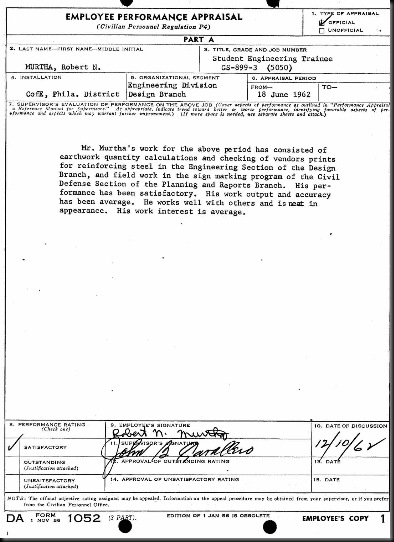 CONELRAD: If you didn’t post the signs, who on your team did?

MURTHA: Usually, the laborer physically posted (i.e., glue, nail, screw, etc.) the signs.   However, we worked as a 2-man team so sometimes I would post.  We would survey the inside and outside of the building and decide where to best place the signs.  We would then get our equipment (ladders, signs, attachment devices, etc) from the car and go to work as a team.

CONELRAD: In the course of your assignment did your team ever have to take down old shelter signs that pre-dated the uniform fallout shelter sign?

CONELRAD: Could you offer a few (or more) anecdotes from your days on the fallout sign crew?

MURTHA: When we worked in northern New Jersey, we first stayed in rooms at the YMCA in East Orange, NJ.  I think we paid $3/night for a room with community bath down the hallway.  After about 6 weeks, they asked us to leave because the maid had seen a starter pistol on my room desk and thought it was a real weapon.  That worked out great for us, because we then moved into a fancy high-rise hotel in Newark, NJ for the remaining 6 weeks of work (before returning to Drexel in January 1963).  I remember watching the Cuban Missile crisis (18-29 October 19962) on the YMCA TV.  One time, two teams were assigned to a Catholic grade school.  Upon arriving at the school, myself and another trainee contacted the “Mother Superior”, who was not expecting us.  We were directed to the adjacent rectory to obtain the approval of the parish priest.  Well, the priest also did not know anything about our visit and was quite disturbed about the whole thing.  He also took the opportunity to scold me for chewing gum in his presence.  I was only 18 years old and a non-Catholic who wondered  “Why me?”  Finally, after making a few phone calls he agreed to allow us to post his grade school.  From then on, our COE supervisor (an Italian-American Catholic from South Philly) jokingly assigned any Catholic buildings to the Catholic trainee.  We had a good time that fall in NJ.  It was my first time away from home for any extended period of time.  The laborers were African-American family men probably in there 40s or 50s. Being sports lover of usually ill-fated Philly teams, we had a common bond to share during the working days as we walked within the schools, churches, office buildings, apartment buildings, hotels, department stores, and a few bar rooms of northern NJ.

CONELRAD: Do you still see the occasional fallout shelter sign even today? Does it bring back memories?

CONELRAD: Could you briefly describe your career following your fallout shelter crew days up to the present?

MURTHA: I graduated from Drexel in 1966 with a BS in Civil Engineering. I graduated from New Mexico State University (NMSU) in 1968 with a MS in Civil Engineering.  In the Spring of 1967, NMSU offered the Fallout Shelter Analysis course.  I successfully completed this course and my Fallout Shelter Analyst number is No. 211-1452-67.  Since August 1968 I have been working for the US Navy as a Research Structural Engineer in Port Hueneme, CA.  In 1968, the Navy organization was the Naval Civil Engineering Laboratory (NCEL).  In 1993, NCEL was reorganized and our name was changed to the Naval Facilities Engineering Service Center (NFESC).  Most of my work experience involves the analyses/design of Navy facilities subjected to effects of accidental explosions.  In 2003, I (along with many other Department of Defense employees) was awarded a Certificate of Victory in the Cold War.  I currently have over 37 years of service with the Department of Defense. 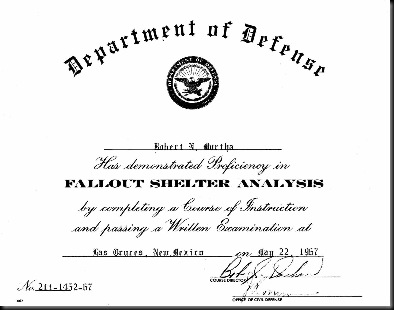 Interview conducted with Robert Murha via e-mail by Bill Geerhart on October 4, 2004. All images accompanying this interview are used here with the written permission of Mr. Murtha. CONELRAD would like to thank Mr. Murtha for sharing his recollections.

Posted by Bill Geerhart at 4:17 PM

Thanx to admin for updated information. I enjoy reading your articles as I want to learn writing style. I order written papers, mostly essays at writing company that is British. I like the quality and manner they treat customers. essay writing service they are professionals in writing.

MasterPapers.com are among the best writing services that can write your papers with a high quality. All you need to do is to provide them with all the details.

Dear author, i would like to say thank you for all the information in the article above! I hope that i will be able to share with all of my readers and also i am planning to write my essay about it.

Thanks for Nice and Informative Post. This article is really contains lot more information about senior papers

Don't know what to write and on what topic to write an essay? Do you have a lot of questions about it? I think they will help you https://prime-essay.net/samples/Management/disk-management-and-maintenance-essay.html I recommend! !!

I would like to say thanks for all the statistics within the article above! I hope that I might be able to share with all of Co-working Space In UAE my readers I revel in studying your articles as I need to examine writing style. I order written papers, normally essays at a writing employer that is British.

We have been directed to the adjacent rectory to acquire the approval of the parish priest. Nicely, the priest also did not realize something about our visit and turned into pretty disturbed approximately everything. He also took the opportunity to scold me for chewing gum in his presence. From then on, our coe manager (an Italian-American catholic from south Philly) jokingly assigned any catholic homes to the catholic trainee.

The tool records every press of your spacebar. Thus, you can calculate how many times you press the space button in a minute. Recently, spacebar hitting competitions started in TikTok. This contest started by some TikTok users is turning into a growing trend.
Space bar clicker

This site is amazing, all the information is very valuable. This is an excellent article. All ideas are like that. I appreciate your post! Please refer to the link provided if you need help with Faster Clicking Speed. You can learn about Kohi Click Test- Tips & Technique from this article. Feel free to visit and share your thoughts.

If you need to pay someone to Do My Online Class for Me , Go to SpiderEssay and choose the specifics of your paper