SEARCHING FOR THE DOOMSDAY SCRIPT

On October 21, 2011 historian and longtime friend of CONELRAD David Krugler emailed to us an intriguing and maddeningly incomplete Cold War era document. The 1960 memo with the subject line “Emergency Statements” proves that the United States government considered the use of prepositioned messages by the President for use in the event of a nuclear attack. Unfortunately, the attachment with the “prepared…text” that is so prominently called out by the document’s author is nowhere to be found.

When we asked Professor Krugler if he had the attachment he said that he did not and would have certainly copied it had he seen it in the early 2000s when he was researching his book. CONELRAD immediately hired a highly recommended researcher to go to the National Archives in College Park, Maryland to find the document.

As of this posting, the attachment has not been located in the folder or the box in which Professor Krugler originally found the memo. Our researcher is currently going through additional boxes in the Record Group, but the prospect of finding the “Doomsday Script” does not look promising. But while we are looking for this crucial part of the treasure map that may ultimately lead to the Arthur Godfrey Doomsday Tape (or, perhaps more likely, the Dwight D. Eisenhower Doomsday Tape), we thought we might as well share what we do have.

OUR PART OF THE TREASURE MAP

“Emergency Statements” is dated April 22, 1960 and was issued by Lewis E. Berry (1914-2005), Deputy Administrator of the Office of Civil and Defense Mobilization. It was rewritten by Eugene J. Quindlen (1919-1977), Assistant Director for Government Preparedness, Office of Emergency Preparedness. The intended recipient was Kenneth T. Downs (1909-1991), Assistant Director for Training, Education and Public Affairs for the Office of Civil and Defense Mobilization (OCDM). Dean Pohlenz (1920-1993), one of the signatories, was an official with OCDM. “J. Scott,” one of the cc addressees, is Jack R. Scott (1921-2008), classified location director, OCDM. The document, which resides in Record Group 396, Box 5, Folder “Federal, State and Local Plans” at the National Archives and Records Administration at College Park, Maryland, is presented below along with a transcription.

Assistant Director for Plans and Operations

For several months our staffs have been discussing the possibility of prepositioning at the Classified Location a suitable script for general broadcast immediately in the event of an emergency.

We have also inquired as to the feasibility of prepositioning a recorded message which could be broadcast under specific circumstances.

On various occasions rotating personnel to the Site have raised the matter for discussion. Mr. Heslep of the Atomic Energy Commission has prepared a possible text, the main feature of which is that it does not pretend that the President is delivering it “live.” This seems to be worth serious consideration, and I am, therefore, attaching Mr. Heslep’s material for such appropriate use as you might wish to make. 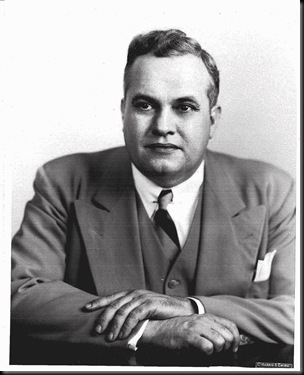 The man so notably mentioned in the document as the writer of the sample emergency “text” is a Richmond, Virginia native named Charter Heslep (1904-1963). Heslep, at the time of the memo, was the Chief of the Program Review and Analysis Branch of the Atomic Energy Commission’s Division of International affairs based in Germantown, Maryland. Before the doomsday scribe’s lengthy employment began with the AEC in 1949, he worked in news reporting and editing capacities for the Washington Daily News, NBC, the Mutual Broadcasting System and Congressional News Quarterly. During World War II he served as the chief radio news censor for the U.S. government. Along the way he collaborated on Admiral William D. Leahy’s memoir I Was There [V. Gollancs, 1950] and assisted in the writing of his friend Estes Kefauver’s book, 20th Century Congress [with Jack Levin, Essential Books, 1947].

During Heslep’s long career with the AEC, he witnessed a number of atomic tests and received the strange souvenir “diplomas” presented below to prove it. In 1952 he helped execute the world’s first televised atomic detonation. And in 1955 and 1958 he coordinated press coverage for the Atoms for Peace Conferences in Geneva, Switzerland.

Heslep also had the opportunity to listen to Edward Teller privately disparage his scientific rival J. Robert Oppenheimer as Teller prepared for his role as a witness against Oppenheimer during his notorious 1954 security clearance hearings. Heslep summarized his conversation with the model for Dr. Strangelove in a memo to AEC Chairman Lewis Strauss. That correspondence is excerpted on pages 532-533 of American Prometheus: The Triumph and Tragedy of J. Robert Oppenheimer by Kai Bird and Martin J. Sherwin [Knopf, 2005]. In the memo, Heslep states that it will be difficult to “unfrock [Oppenheimer] in his own church” in summing up Teller’s belief that Oppenheimer still had the backing of the scientific community.

On July 29, 1963 Charter Heslep, who resided in Silver Spring, Maryland, died in a Berkeley, California hospital following a heart attack. He had been in the San Francisco Bay area on a business trip in his role as the Assistant to the Director of Public Information for the AEC. His wife, Margaret, passed away ten years later. CONELRAD was able to locate Heslep’s son, Thomas C. Heslep in Oregon, but not his daughter, Sara, who may or may not live in Florida.

Thomas told CONELRAD that he recalls his father going on an extended business trip to a presidential bunker in the mountains, but that there were “a lot of things [his father] couldn’t talk about.” The son was not surprised to hear that Heslep may have written an end-of-the-world script for President Eisenhower, but stated that he had no direct knowledge of it. When asked if he had any of his father’s papers, Thomas told us that the last remaining family records are in a safety deposit box in Chicago under his only sibling’s control. He believes that his sister Sara, whom he has not had contact with in over twenty years, is deceased and that he is trying to obtain access to the safety deposit box. If there is a doomsday script or recording, it may well be found in a Chicago bank vault, because it doesn’t appear to be anywhere else.*

* CONELRAD has contacted several different institutions that house portions of Charter Heslep’s papers (The Harry S. Truman Library, Oregon State University and the American Heritage Center at the University of Wyoming) and none contain the painfully elusive attachment to the memo featured in this post.

CONELRAD also contacted the Dwight D. Eisenhower Presidential Library where we were told by a senior archivist that they do not have any material on “Emergency Messages.”

When we asked the Department of Energy to check their AEC records on correspondence by Charter Heslep for the period in question, we were told that nothing on Heslep or the topic of prepositioned emergency messages could be found.

CONELRAD derived its biographical information on Charter Heslep from the following sources:

Biographical Information contained at the conclusion of “They Said It Couldn’t Be Done: The Story of the First Live Televising of an Atomic Detonation” transcript of an address by Charter Heslep on May 9, 1952: http://web.mac.com/zcleve/KlausTribute/AbombHeslep.html

CONELRAD is once again indebted to David Krugler for providing us with such a fascinating lead. If we ever find the attachment containing the Doomsday Script, he will be the first to know. And you’ll be second.

Thanks to Michael Ravnitzky for his assistance in identifying “J. Scott” in the memorandum.

Posted by Bill Geerhart at 4:38 PM

It is great to observe somebody put enough craze towards a matter. I'm thankful that I stumbled upon this process. I am lucky I used the time to read on past the 1st paragraph. You have got a whole lot to say, very much to offer. I really hope guys understand this and look into your page.

I wish I knew of this. Son Tom passed away recently. He lived in Ashland Oregon.

I'm glad I had made the right decision when ordered my first essay here on Domyhomeworkfor service. Not only do these guys take the load off your shoulders, but they also offer their work as a sample to learn from! Now I can pay a small amount of money and got my essay done in few days. The writer is very professional and put all her efforts into my literature subject.


Thank you so much for providing good quality information. I think it would not have been easy to
collect this information and organize it in an easy to understand way.
I'll add it to my bookmarks so I can visit it often! And I will share it with my acquaintances.
And there is a lot of useful information on our website too,
so please take a look and take a look. Then have a good day

E-money can be conveniently stored on your phone, computer, a USB card(in code) or a smart money card. Credit and debit cards are a form of digital money. You can make use of any of the payment methods to transfer money easily.
spacebar test

The cheapest way to travel from West Croydon to Brighton Road is Purley,Selsdon with reliable and quality services.
book online or call us: 02086862777.
Quick Taxi Estimates for Local Transfers.You can also book though our app Snug ride.