THE GIRL IN THE KREMLIN: PRESSBOOK HIGHLIGHTS 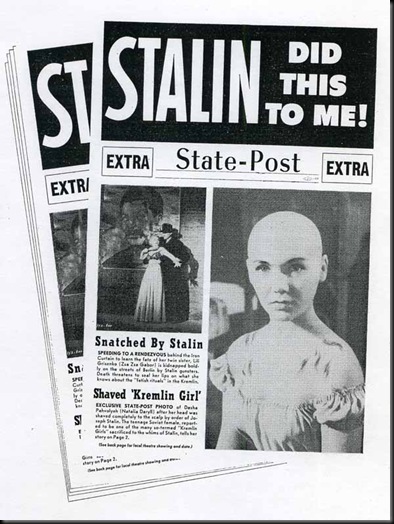 Almost as much fun as the preposterous historical fantasy it seeks to sell is the official pressbook for the 1957 Universal production about Joseph Stalin’s “faked” death, THE GIRL IN THE KREMLIN. In addition to questionable factual material about the film (one “sample” review that is included to “aid” newspaper writers calls the movie “sensational but credible”), the pressbook offers some ridiculous stunts and advertising copy to theater owners to help them promote the outlandish motion picture. CONELRAD chose a few highlights that demonstrate just how insane the studio publicity departments could be during the golden age of the B-movie. The text below, excepting CONELRAD’s editorial comment, is taken verbatim from the official studio pressbook.

THIS STUNT WILL GRAB BIG SPACE FOR YOU….. IT WAS TESTED AND IT WORKED

Yes, this stunt was tested in downtown Los Angeles during production of THE GIRL IN THE KREMLIN. Maurice Manson, who plays Stalin in the picture, was taken downtown in make-up and uniform and turned loose to stroll through the streets. In this particular case, just one newspaperman was alerted and he followed Manson to report what happened.[i] As can be seen in the photo above, very little happened—even the fellow giving Manson a light for his pipe seems to see nothing extraordinary in meeting a man resembling Stalin and wearing a Red army uniform in downtown Los Angeles. 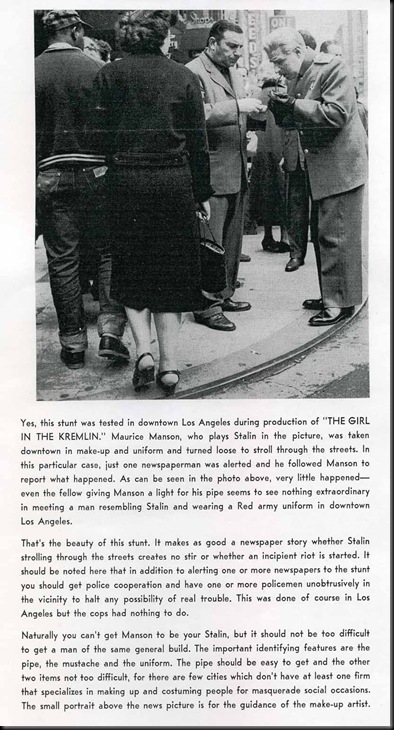 That’s the beauty of this stunt. It makes as good a newspaper story whether Stalin strolling through the streets creates no stir or whether an incipient riot is started. It should be noted here that in addition to alerting one or more newspapers to the stunt you should get police cooperation and have one or more policeman unobtrusively in the vicinity to halt any possibility of real trouble. This was done of course in Los Angeles but the cops had nothing to do.

Naturally you can’t get Manson to be your Stalin, but it should not be too difficult to get a man of the same general build. The important identifying features are the pipe, the mustache and the uniform. The pipe should be easy to get and the other two items not too difficult, for there are few cities which don’t have at least one firm that specializes in making up and costuming people for masquerade social occasions.

SENSATIONAL FOTO FEATURE – THE GIRL WHOSE HEAD WAS SHAVED

Certainly one of the most sensational scenes in motion picture history is the sequence in THE GIRL IN THE KREMLIN in which Dictator Joseph Stalin watches while a pretty girl, at his orders, has her beautiful locks shorn and her head then shaved as bald as a billiard ball. 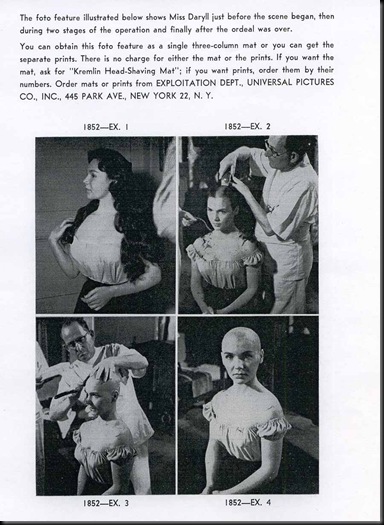 In putting this re-creation of a strange Stalin fetish on film, Universal-International used no trickery whatsoever. A pretty actress named Natalia Daryll actually had her locks shorn and her head shaved while the cameras photographed the whole operation. The foto feature illustrated below shows Miss Daryll just before the scene began, then during two stages of the operation and finally after the ordeal was over.

You can obtain this foto feature as a single three-column mat or the prints. If you want the mat, ask for “Kremlin Head-Shaving Mat”; if you want the prints, order them by their numbers. Order mats of prints from EXPLOITATION DEPT… 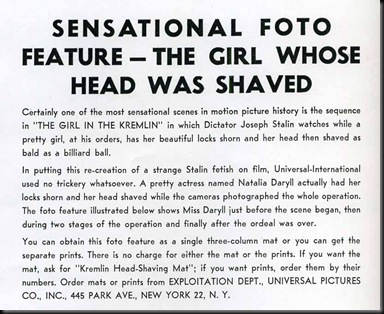 Whether or not you can manage the Stalin stunt illustrated on the opposite page, THE GIRL IN THE KREMLIN also presents fertile opportunities for street ballyhoo based on the Stalin head-shaving fetish. It’s not likely you can find any bald girls willing to expose their heads but you can surely get four girls with fairly short hair. Dress them in peasant blouses and skirts, have each one’s head bound tightly with a red bandana, letting not a wisp of hair show. Have them bearing placards with appropriate inscriptions, sandwich-man style, and parade them in single file on the main thoroughfares. Suggested placards, in order: “Stalin Had Our Heads Shaved”—“That Was Stalin’s Secret Vice”—“It’s All Told in THE GIRL IN THE KREMLIN”—“Begins ……………..at the……………..Theatre” or “Now Playing at the …………………Theatre.” 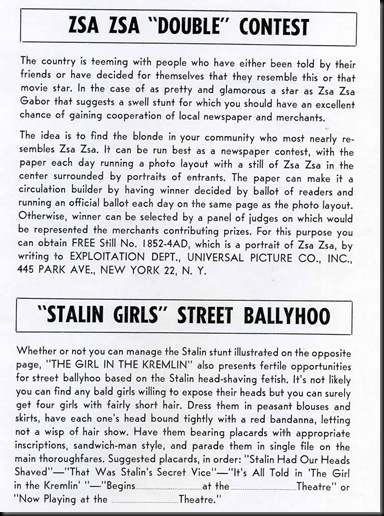 The country is teeming with people who have either been told by their friends or have decided for themselves that they resemble this or that movie star. In the case of as pretty and glamorous a star as Zsa Zsa Gabor that suggests a swell stunt for which you should have an excellent chance of gaining cooperation of local newspapers and merchants. 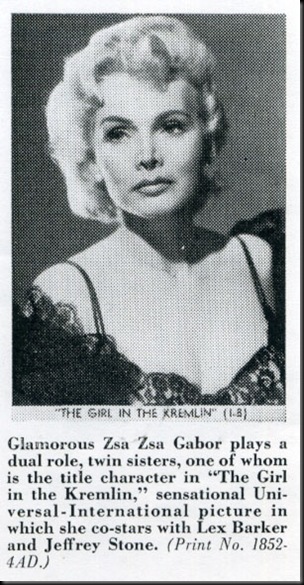 The idea is to find the blonde in your community who most nearly resembles Zsa Zsa. It can be run best as a newspaper contest, with the paper each day running a photo layout with a still of Zsa Zsa in the center surrounded by entrants. The paper can make it a circulation builder by having the winner decided by ballot of readers and running an official ballot each day on the same page as the photo layout. Otherwise, winner can be selected by a panel of judges on which would be represented the merchants contributing prizes.

One shameless stunt that went unmentioned in the pressbook, but that was employed by at least one theater owner, was to offer $300 (the same amount Natalia Darryl received to have her locks shorn on film) to a female patron to have her head shaved in the lobby of the venue. The following is transcribed from the April 25, 1957 edition of the San Francisco Chronicle (page 23):

Pat Smith, a 24-year-old San Francisco housewife, had her head shaved at 10:45 A.M. yesterday in the lobby of the Golden Gate Theater to publicize a motion picture called ‘The Girl in the Kremlin.’ She got $300.00. Witnesses to the stunt: Daughters Janet, 2, and Ronita, 3. Her husband, Ron, 25, an employee of the American Can Co. gave his permission. He also watched.

The “suggested” radio spot copy offered for THE GIRL IN THE KREMLIN in the pressbook is just weird enough to warrant full transcription here. Imagine tooling around town in your Buick in 1957 and hearing this bizarre nonsense emitting from your radio (we would have burned rubber for the Bijou, but that’s us…):

ANNOUNCER: Is Stalin still alive?... Who is the girl in the Kremlin who may hold the key to history’s grimmest riddle… SEE THE GIRL IN THE KREMLIN! … Starring Lex Barker, Zsa Zsa Gabor, Jeffrey Stone… leading a hunt deep into the forbidden danger zones of Europe for the tyrant the world thinks dead… Ask yourself, is this the truth about the most incredible conspiracy of our time? …Is Stalin still alive?... See THE GIRL IN THE KREMLIN!

[i] James Bacon of the wonderfully sensationalistic Los Angeles Examiner was the reporter given the privilege of accompanying “Stalin” (actor Maurice Manson) to downtown L.A. and taking note of the citizen reaction. His account of the studio-sponsored stunt appeared on the front page (above the fold) edition of the Examiner on February 22, 1957. The headline, in imitable Examiner fashion, was: “Joe Stalin Here! So Wh-a-t: Takes Stroll Downtown, Gets Wino Howdy.” The whole article is so amusing and bizarre that CONELRAD is presenting it verbatim below:

Actor Maurice Manson, a striking double for the late Soviet ruler, emerged from a big limousine yesterday at Seventh and Broadway, heart of the downtown area. He strolled for several blocks wearing an exact replica of Stalin’s marshal uniform, complete with hammer and sickle epaulets.

There were a few double takes among the passersby, but most looked at him as if Stalin was something you see everyday. At one corner, he inquired of a policeman:

“Could you tell me please I find FBI? I joost come here from Russia and don’t know my way yet.”

The policeman, playing it straight-faced, said he wasn’t sure of the location but asked “Stalin” to wait a minute while he looked up the address in his map book. The officer courteously spelled out the directions. Manson thanked him in a Russian accent and the officer, with no trace of a smile, went back to blowing his whistle.

Next stop on his stroll was a news vendor’s, where the actor asked if he could buy a copy of Pravda.

“I’m sorry,” the vendor replied matter-of-factly. “We are not allowed to carry any Russian papers – not even the Daily Worker.”

Manson is playing the title role in “The Secret Diary of Josef Stalin.” (CONELRAD editor’s note: the released film had the final title of THE GIRL IN THE KREMLIN).

As the film actor walked towards Pershing Square, downtown hangout of winos, hoboes, outdoor checker players and soap box radicals, he was accepted by a habitué who was well along on the grape.

“Hey, buddy,” the wino yelled, “how about buying another serviceman a drink? I was in the first World War.”

One toothless old-timer ambled up and shook hands with Manson.

An evangelistic habitué with flowing hair yelled out: “Stalin, it is not too late. Kneel down with me and repent.” 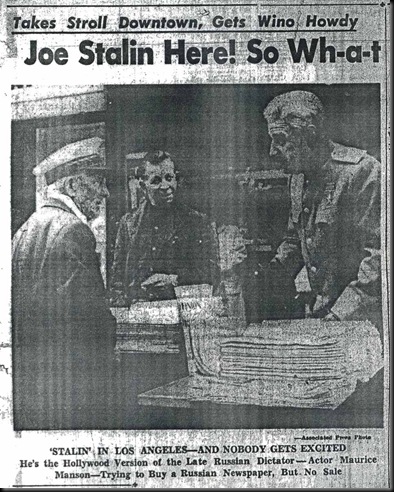 Posted by Bill Geerhart at 6:05 PM