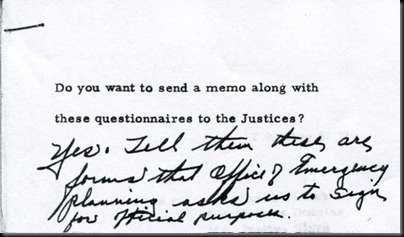 While searching for documents relating to our recent post on the Supreme Court’s Cold War relocation arrangement with a resort hotel in Asheville, North Carolina, we came across something else of interest. A few months after the Cuban missile crisis of October 1962, the Court received “Pass Information” forms from the Office of Emergency Planning (OEP).[1] The “questionnaires”—as a member of Chief Justice Earl Warren’s administrative staff called them—are a bit intrusive. Indeed, one line requests the submitter’s blood type (“If known. Otherwise leave blank”). Another line requests the submitter’s weight. There is also a request for “three (3) pictures” that “should be of such a size that a picture 2 1/16” x 2 x 1/16” can be trimmed to fit the passes.”

What was this mysterious pass for exactly? The dead giveaway is at the bottom of the document. The text instructs the submitter to return their “Pass Information” form to William E. Elliott, Security and Inspection Officer, Office of Emergency Planning. Mr. Elliott, as CONELRAD blog readers may recall, is the same person referenced in our recent Mount Weather Morals Case Mystery post. Specifically, he was one of the men consulted in the rushed handling of a “morals case” that threatened to compromise two top secret federal emergency relocation sites. We have another document that references this individual as being a senior official with security operations at the “Classified Location” (aka Mount Weather, aka High Point, aka the Special Facility). Not much else is known about the shadowy Mr. Elliott other than that he shows up in a 1958 Official Register of the United States entry as a “Security and Inspections Officer” with an annual salary of $12,150. If William E. Elliott or any members of his family are reading this post, we’d love to hear from you.

It is unclear from the handling of this document that the Chief Justice knew what its intended purpose was. The note asking for Warren’s guidance on issuing the form does not indicate whether there was any additional instruction offered by the OEP. 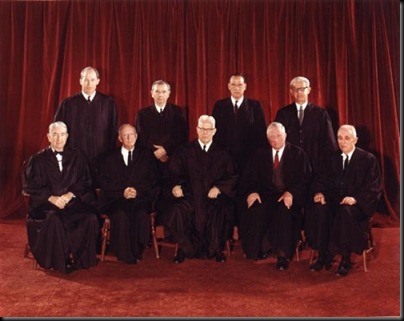 In the end, the memorandum cover page to the “Pass Information” form that was prepared for distribution to the Associate Justices simply states that “The Office of Emergency Planning is asking us to complete the attached form for official purposes.” It is signed off by the initials “E.W.” common to Earl Warren’s memos.[2] CONELRAD was unable to find any evidence that the forms were ever completed by the Justices.[3] Based on the Chief Justice’s declining interest in civil defense, it seems clear that he never disclosed his weight or blood type to Mr. Elliott. 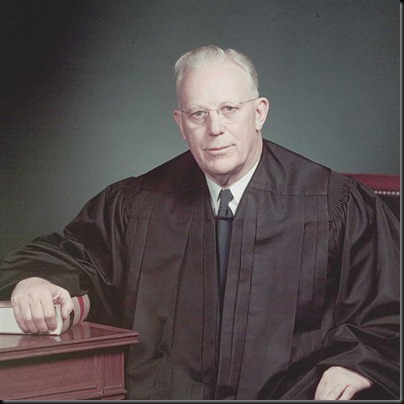 [1] The document was found in Box 359, Papers of Earl Warren
Folder: Sundry Memos to the Court, 1961-1964
Library of Congress, Manuscript Division

[2] During the course of our research at the Library of Congress, CONELRAD examined dozens of Warren’s memos.

[3] CONELRAD reviewed all of the administrative records for this period of the Supreme Court’s history. We have also reviewed all of the unclassified records of the Office of Emergency Planning at the National Archives in College Park, Maryland. There are a significant number of documents from this agency that remain classified.

Posted by Bill Geerhart at 7:45 AM

I just cannot find enough words to express my gratitude. View website service met all the requirements and finished my essay before the deadline without any mistakes or typos or in general any drawbacks. But for you I might have been expelled since my professors were really dissatisfied with my previous papers.

i am regular reader, how are you everybody? This post posted at this site is truly good.

We are experts in handling errors which can stick with QuickBooks. We are a team of technicians, experts, and software developers that are dedicated to helping you all with all tools and techniques associated with QuickBooks. Visit Us to understand more. we also are experts of quickbooks file doctor.

The Quickbooks error 15106 implies that there is a damaged update program and the payroll fails to update.

How to install Computeroids printer driver Windows 7 to the list of pre-installed drivers within Microsoft Windows. You can easily do it with these steps.

This is such a great resource that you are providing and you give it away for free. I love seeing blog that understand the value of providing a quality resource for free.
온라인섯다

You there, this is really good post here. Thanks for taking the time to post such valuable information. Quality content is what always gets the visitors coming.
스포츠토토

I like the many blogposts, I seriously liked, I want details about it, since it is rather wonderful., Cheers pertaining to expressing.
성인웹툰

All the contents you mentioned in post is too good and can be very useful. I will keep it in mind, thanks for sharing the information keep updating, looking forward for more posts. Thanks
토토사이트