TOO SOON? THE HIROSHIMA REENACTMENT INCIDENT 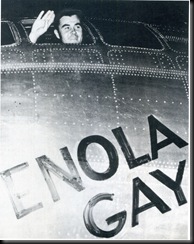 Until the day he died, Paul W. Tibbets was adamant that he never had any regrets or even second thoughts about his role in ushering in the age of atomic warfare over the skies of Hiroshima, Japan on August 6, 1945. The retired Air Force general reaffirmed his unwavering support of the decision to use the bomb some thirty years later in a unique and monumentally ill-advised stunt. On Saturday, October 10, 1976, Tibbets reenacted his historic Enola Gay mission—complete with a simulated atomic explosion—for a paying crowd of 40,000 people in Harlingen, Texas. He repeated the flight two more times the next day. Instead of the Enola Gay, named in honor of his mother, Tibbets flew “Fifi,” a restored B-29 Superfortress named after the co-pilot’s girlfriend.

The purpose of the faux atomic sorties was to help raise funds for a World War II aircraft preservation group called the Confederate Air Force (now known by their less controversial name, the Commemorative Air Force). The non-profit CAF may have sponsored the event, but, shockingly, the U.S. Army supplied a detonation team to help out with the “atomic-bomb simulator,” described in the press reports at the time as “a barrel of explosives” that produced the mushroom-shaped cloud money shot.

The public address script for the re-enactment included the following text heard by the assembled crowd at Rebel Field in Harlingen: “As the B-29 approaches, the explosion of the atomic bomb goes off, ending some of the darkest days in American history…”

In evaluating the stress levels involved in the Enola Gay mission versus the decidedly less deadly Fifi bombing runs, Tibbets told the Associated Press: “There certainly wasn’t as much to worry about compared to 1945.” The pilot then added: “I was not emotionally involved in the dropping of the first atomic bomb. To me, it was a military mission and I was relieved after it was over that it was a success. I’ve never lost a moment’s sleep over the fact that I commanded the bombing…” The AP reporter apparently did not ask the logical follow-up question, "So, in essence, you feel exactly the same now as you did then?"

Of course, after news of the Texas air show’s peculiar main attraction hit the wires, it did not take long for the people of Japan to react. They were, quite understandably, furious.

The Mayor of Hiroshima, Takeshi Araki, who, at first could not believe the incident really occurred, called the re-enactment “a blasphemy” and “grotesque.” In a later press release he wrote that he would tell the organizers of the air show that “What you have done insults the Japanese people who suffered from the bomb. I feel real rage and we shall protest to the U.S. government and all concerned.”

Foreign Minister Zentaro Kosaka was more reserved in his condemnation: “A bomb and a mushroom-shaped cloud is a real nightmare for the Japanese. Although it was a civilian air show, I cannot refrain from feeling badly. They lacked consideration for the feelings of others.”

Juro Ikeyama, an official of the Japanese Congress Against Atom and Hydrogen Bombs told the Post that he “trembled” when heard about the air show. “Our effort to make the world aware of the consequences of atomic warfare have plainly been inadequate. We must do more. The American people have no guilty conscience. If you knew the consequences of what you have done, this demonstration would have been impossible.”

The president of the same organization, Ichiro Mortake, sent a cablegram to the Confederate Air Force calling the atomic bombings of Hiroshima and Nagasaki a “historical crime to mankind” and demanded that the group never again stage such a re-enactment.

On October 14, 1976, the U.S. Embassy in Japan issued an apology for the bad taste displayed by the persons responsible for the Texas air show. The Washington Post quoted unnamed sources describing Embassy officials as being “appalled” by the re-enactment and, especially, the reported involvement of U.S. military staff.

Col. Glenn Bercot, spokesman for the Confederate Air Force, reacted to the international incident that his group had created by stating:

“All we’re doing here is recreating the historic air battles of World War II with the aircraft we have. We are not trying to glamorize it in any way, but to show something solemn…”

A ranking Japanese diplomat had already anticipated that kind of tone deaf excuse and had, the previous day, compared his country’s dismay over the Hiroshima reenactment to how Americans might feel if Japanese veterans restaged the Bataan death march.

The CAF’s last word on the matter was a press statement that concluded:

“We feel that this demonstration was altogether proper and presented in an appropriate manner. We do not owe an apology to anyone.”

Paul Tibbets was smart enough to reserve his comments on the incident for his 1978 autobiography, but they were no less combative. On page 306 of The Tibbets Story, the controversial pilot took a delayed swipe at the man who had protested the reenactment to the CAF. Tibbets suggested that Ichiro Mortake “might not be alive today, to lead his protest group, had it not been for the atom bombs [that ended World War II].

To the best of our knowledge, there has never been another Hiroshima recreation, but Fifi still flies… 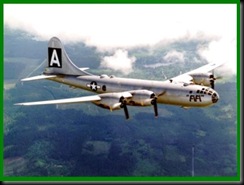 The link in the Conelrad alert to this page is incorrect!

great job, guys, keep at it.

I'm a resident of Harlingen since 1981 (born in '80) and saw CAF shows many times when I was a kid (before they moved to Midland) and remember seeing the Hiroshima reenactment. It was pretty neat. Had a tour of Fifi once, too.

This was actually the 2nd Hiroshima reenactment. First one was at the Los Angeles Coliseum on October 27, 1945. It was called "Tribute To Victory"

“Our effort to make the world aware of the consequences of atomic warfare have plainly been inadequate. We must do more. The American people have no guilty conscience. If you knew the consequences of what you have done, this demonstration would have been impossible.”

Kinda like the Japanese people have no guilty conscience of Nanking, Bataan, etc. To this day, those are not taught in Japanese schools. Selective indignation. 1,177 Sailors of the USS Arizona might have thought otherwise, if they were around to voice their opinion. Sucks to not see it coming.

In 1976 I was assistant chief of the Associated Press Texas bureau headquartered in Dallas. When I got wind of the Confederate Air Force's plans to reenact the atomic bombing of Hiroshima it sounded more than interesting. That Paul Tibbets would be flying the world's last operational B-29 to lend real authenticity to the air show's final event lifted it from mere interest to potential big story. I called the CAF to say I wanted to interview Paul Tibbets, to be on board that B-29 as he recreated his role in world history, and to write a story for AP world distribution. I was warmly welcomed by the CAF. Days later, Tibbets and I stood under the wing of the B-29 "Fifi" for an hour discussing Japan's role in World War II and his feelings about how the war ended. At times like that reporters are not supposed to show or imply they have feelings or emotions. Their questions and their writings must be objective in every way. It was a tough question for me to ask because I felt it would be more than a tough question for him to answer. Asking "How do you feel about killing 80,000 or 90,000 people all at once" implies judgment, criticism and reproach. Obviously, Tibbets had wrestled with that question before August 6, 1945 and for 30 years afterward.

Years earlier I had worked in radio with a man who survived the Bataan death march. He had spent three years in a POW camp in Japan. When he escaped he and his comrades confronted a group of Japanese army officers frolicking with women in an indoor swimming pool. They shot and bayoneted the enemy to death with their own weapons. My friend, Fred Katool, had no regrets but he felt a lot of bitterness over Japanese abuse of he and thousands of other American and British soldiers, sailors and airmen. He stayed drunk for three years following the war before psychiatric help was able to restore his mental health. No sane, compassionate person can take pleasure in killing. As Paul Tibbets often pointed out he did what he had to do without regret to forestall many thousands more Japanese and American deaths in a mainland invasion of Japan. Remember that Japan ignored President Truman's many appeals to surrender peaceably. He warned them of what was coming their way if they refused to lay down their arms. He wasn't kidding. They weren't listening. I once served with a Naval officer veteran of WWII. After his ship sank a Japanese submarine he reached down over the railing to extend a rescue hand to a Japanese sailor. Instead of accepting the offer of salvation the sailor held up a knife, scowled, slit his own throat and slipped beneath the waves. If Tibbets had not done what he did another man would have done the job for him. It would have been necessary. If Japan had not attacked Pearl Harbor and Hickam Field December 7, 1941 none of what followed in the Pacific -- including the atomic bombing of Hiroshima and Nagasaki -- would have been necessary.