On Friday August 6, 1965 at four minutes past noon, WABC-77 (New York City) afternoon DJ Bob Dayton casually mentioned that it was the twentieth anniversary of the Hiroshima bombing. He then said “…So in view of that…” and the opening lyrics to The Crests’ hit 16 Candles seamlessly followed (“Happy Birthday, Happy Birthday, Baby…”).

Dayton was fired the same day. 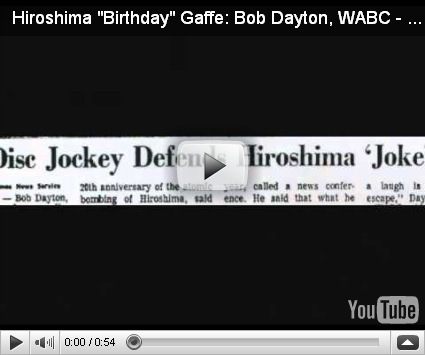 Walter Schwartz, general manager of the station, told the press of his immediate reaction:

“I couldn’t believe what I was hearing. The show continues to 2 p.m., and the only reason I didn’t take him off right then (in the noon hour) was because I didn’t have disc jockey to fill in for him.”

Dayton awkwardly tried to defend his stunt—which had already made headlines across the country (and, no doubt, in Japan, too)—by saying he was trying to alleviate the sadness of his listeners during a difficult time (an odd explanation given that his audience was made up of teenagers on summer vacation who just wanted to listen to Top 40 hits):

“The antidote for hundreds of years of tragic events has been humor, the ability to laugh at serious situations. This does not lessen the impact or importance of an occasion, but my definition of a laugh is a moment of escape… If I am guilty of any misjudgment whatsoever, I believe it’s in the time element involved and not the character of the material.”

Jacob Beser, the radar countermeasures officer on both atomic bombing missions in 1945, was asked to comment at the time of the Dayton controversy. On behalf of himself and his former crewmates, Beser made the following remarks to the HTNS wire service:

“Maybe he should have been fired. This is smart-alecky stuff and uncalled for. We feel these were tragic events—the bombings—serious and sad happenings. You certainly don’t gloat over something like this.”

Bob Dayton went on to work at KBLA and KRLA in Los Angeles and later returned to New York to spin discs at WPIX-FM and WCBS-FM. He passed away on April 28, 1995.

He was not the first DJ to apologize for an inappropriate gag and he would not be the last. 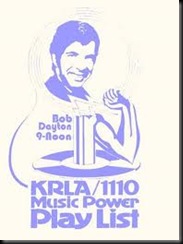 Thanks to Jim Walsh for suggesting this strange Cold War incident to us.

And thanks to the folks at MusicRadio.com for preserving this type of historic audio. The YouTube clip embedded at the beginning of this post contains both the Bob Dayton Hiroshima incident and the 1969 “Paul is Dead” remarks that cost DJ Roby Yonge his job.

Posted by Bill Geerhart at 9:51 PM

Life has a certain flavor for those who have fought and risked all that the sheltered and protected can never experience. See the link below for more info.

Reading your article is such a privilege. It does inspire me, I hope that you can share more positive thoughts. Visit my site too. The link is posted below.

A Person can merely enjoy two occasions relating to him/her personally.
One, is Birthday - a day in a year.
Another, is Marriage Day - A Day in a Lifetime.
Both are most precious ones, which stay memorable for a long time.

I wish you a very very Happy Birthday to you and all Birthday Wishes fill the life with joy and blessings.