Atomic Fiction for the Modern Housewife

"She heard the screaming siren…she saw the flames…she struggled, wild with horror, but she was too feeble, and she knew there was no escape. If only the children…”

-- Opening lines from The Unthinkable by Mary Augusta Rodgers as published in the June 30, 1960 edition of the Saturday Evening Post 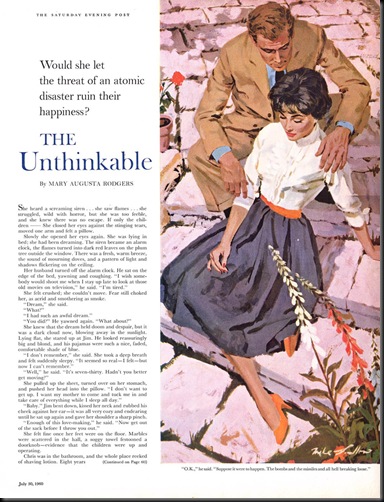 It was sometime in the late 1950s when short story writer Mary Augusta Rodgers took a tour of a bomb shelter that had been constructed by one of her neighbors in Detroit. “Everyone knew about it,” she told CONELRAD in an interview. “I never thought of having one and neither did my husband.”

Chillingly, the neighbor made it clear to everyone on the street—including Mary—that in the event of a real atomic attack, he would shoot anyone who tried to force their way into his family’s radioactive refuge. “He was very upfront about it,” recalled the author.

Mary channeled the tense mood of this era into a fictionalized account of suburban angst entitled The Unthinkable that was published in the Saturday Evening Post in 1960. The magazine’s teaser text—“Would she let the threat of atomic attack ruin their happiness?”—left little doubt as to the intended target audience.

The story opens with an unnamed housewife’s dream of an atomic war, but then quickly shifts to a protracted depiction of domestic life: breakfast with Jim, her handsome, blond husband; taking care of the young son and daughter; shopping. However, Rodgers does sprinkle this part of the narrative with a couple of nods to the Cold War’s linguistic invasion of everyday American speech:

“Someday she was going to turn on all the appliances at once and see if the house didn’t launch itself heaven-ward like a guided missile.”

Later in the story, the nameless housewife is talking with her friend, Betty, and the subject of the previous evening’s civil defense meeting comes up. “They had a good speaker.” the protagonist tells her friend and then amplifies: “Too good. It was scary.” The self-involved Betty replies: “That’s why I didn’t go… Listen, I can’t be worrying about atomic attack. I’ve got troubles of my own.”

In the end, the housewife realizes it was the civil defense lecture that had caused her horrific dream. She unburdens herself of the nightmare by recounting it to her husband. Jim replies with a live- for-today philosophy that is perhaps a legacy of his own wartime experience:

“O.K. Suppose it were to happen. The bombs and the missiles and all hell breaking loose. It would be a shame to remember this sort of life and realize that we’d never valued it enough.”

The housewife, who had been wavering on the topic of survival, replies: “That’s what I’ve been thinking all day.”

Appropriately enough, just below the final text of The Unthinkable is an illustrated advertisement for the Metropolitan 1500 automobile featuring a young couple in tennis togs. Like Jim and his wife, they seem to have learned to stop worrying and forget about the Bomb.

Was Jim’s stated attitude shared by Mary Augusta Rodgers? She told us that “it always comes down to that [“live for today”], doesn’t it? And tomorrow never comes.” The author then added that she “wouldn’t want to be around for the aftermath” of an atomic war. 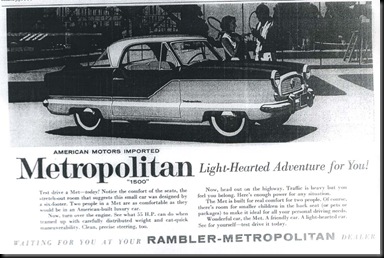 Mary Augusta Rodgers was born and raised in Louisville, Kentucky. She began writing freelance feature pieces for the Louisville Courier-Journal while she was still in high school. She was paid $7.50 per article and was thrilled to be doing something she loved. Her editor, Cary Robertson, later worked with another young Louisville journalist named Hunter S. Thompson. No, Mary never met Dr. Thompson.

After World War II, Mary moved to Washington, D.C. where her husband, William Henry Schoen III (1921-2010), had become a speechwriter for the State Department. In 1952, the Schoen family moved to Detroit where Mr. Schoen was employed by the Ford Motor Company as a writer and publicist. The couple raised three sons and a daughter.

Mary was always writing and her stories frequently involved the themes of suburban motherhood. She was published in every major American magazine with the exception of the New Yorker. When the Equal Rights Amendment was being debated in the 1970s, Mary championed it from the perspective of the housewife whom she believed worked just as hard as any career woman. In the 1980s the author contributed travel pieces to the New York Times. In 1995 Mary’s book, Country Roads of Kentucky, was published. Excerpts from Mary’s November, 1964 Redbook magazine story, An American Family, are included the book Century of Voices: Detroit Women Writers Anthology: 1900-2000.

When Mary isn’t shooting the breeze with her longtime friend and literary peer, Elmore Leonard, or keeping abreast of current events, she continues to write. She has a drawer full of material, but laments the fact that most magazines have long since stopped publishing short fiction. Perhaps someone at the New Yorker is reading this and will help introduce Ms. Rodgers to a new generation of readers.

For an example of Ms. Rodgers’s travel writing see “Rediscovering the Grandeur of the Tetons,” New York Times, June 1, 1986.

Mary was generally composing and her tales often included the themes of suburban motherhood. She was released in each significant American magazine

I have played the online games especially the wow for a long time and I have some good suggestions for everyone to get the bestbuy cheap wow gold via more easy and safe ways, I also have the best advice for you of the Cheapest WOW Gold, please don't hesitate !

Really inspirational to hear someone pursuing their dreams and becoming successful instead of following the traditional path. I have read your article about This topic. I think it's good and impressed to know your service. Thanks for share this Information.
บริษัท แม่บ้าน

There is SHOCKING news in the sports betting world.

It has been said that any bettor must watch this,

Watch this or stop betting on sports...

With your writing skills as well as the layout of your blog, I'm very impressed. Is that a paid subject or did you customize it yourself? Anyway keep up the excellent writing, it's very uncommon to see a great blog like this one nowadays. If you have a high click per second (CPS) game like Minecraft or Final Fight you'll need a fast mouse, good reflexes, a good internet connection, and a good server with a faster response time. My recommendation is to visit the Mouse Click Faster post where you will best mice and tips and tricks to click faster.

LiveJournal is a social media platform that allows members to keep a blog, journal or diary and share their interests. Each LiveJournal account contains a journal page that shows all of a user's most recent journal entries and links to comments pages, similar to a blogroll.
space bar counter