The Best of “I Led Three Lives” 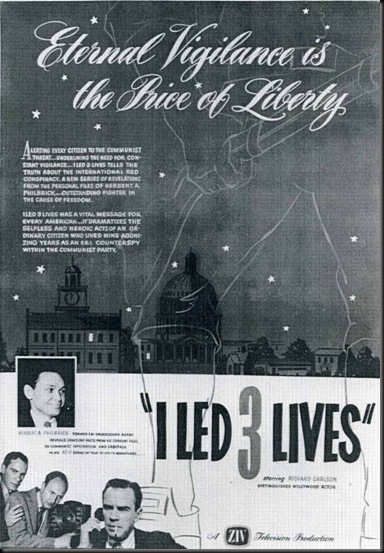 “This is the story, the fantastically true story of Herbert A. Philbrick, who for nine frightening years, did lead three lives…average citizen, high level member of the Communist Party, and counterspy for the Federal Bureau of Investigation. For obvious reasons, the names, dates and places have been changed, but the story is based on fact.”

In the fall of 1953 I Led Three Lives, the television series adaptation of Herbert A. Philbrick’s best-selling anti-Communist memoir of the same name, premiered on ninety-four stations across the United States.[1] This enormously popular syndicated show starring B-movie actor Richard Carlson as Philbrick was produced by Ziv Television for three seasons. The program ended its original run in mid-1956 with 117 episodes produced.[2] I Led Three Lives was a highly rated[3] phenomenon of its McCarthy-era times and it was sold in trade publications with the breathless fervor of a Red-baiting political speech:

Ziv’s new show is TV Dynamite! From the Secret Files of a counterspy for the FBI! TREASON on our doorstep… this man slammed the door! Starring Hollywood’s Brilliant Actor Richard Carlson in the true life story of a patriotic young American who led 3 lives in the service of our country! 1. Citizen! 2. Communist! 3. Counterspy for the FBI!

“I Led 3 Lives.” Tense because it’s Factual! Gripping because it’s Real! Frightening because it’s True! Each half-hour a true-life adventure! Your opportunity to have the most timely and important TV program in your city! Not just a script writer’s fantasy—but the authentic story of the Commies’ attempt to overthrow our government! You’ll thrill to the actual on-the-scene photography…factual from-the-records dialogue taken from the secret files of a counterspy for the FBI. Authentic sets and scripts personally supervised by Herbert A. Philbrick the man who, for nine agonizing years lived in constant danger as a supposed communist who reported daily to the FBI! Never before has such a dramatic document appeared on TV!

Amazingly, the show exceeded the expectations fanned by all of the over-the-top promotional copy that Ziv shoveled out. I Led Three Lives is a non-stop paranoid fever dream that never fails to deliver the goods in each of its 117 episodes. If anything, the series is even more fascinating today than it was when it was originally aired. In addition to the hysterical dialogue and outlandish plots, the low-budget location shooting is a wonder to behold (even when viewed on third or fourth generation bootlegs).

But as astonishing as it may seem to the modern television viewer, I Led Three Lives was taken quite seriously in some quarters during its initial run. Indeed, in 1956 the conservative Freedoms Foundation gave the show its Top Award “for outstanding achievement in bringing about a better understanding of the American way of life.”[4] 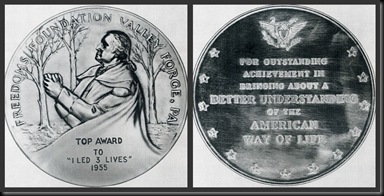 A more dubious honor issued to the series was the revelation that presidential assassin and avowed communist Lee Harvey Oswald counted it among his favorite childhood TV programs. Robert Oswald, Lee’s older brother, wrote about this curious fandom in 1967:

“The center of Lee’s fantasy world shifted from radio to television when Mother bought a television set in 1948. When it was new, all of us spent far too much time watching variety shows, dramas and old movies. Lee, particularly, was fascinated. One of his favorite programs was I Led Three Lives… In the early 1950’s, Lee watched that show every week without fail. When I left home to join the Marines, he was still watching the re-runs.”[5] 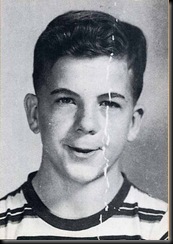 The purpose of this post is to give the general public an opportunity to see some selected moments from the show. It is hoped that someday the series will be issued in a pristine DVD collection from the prints stored at the Wisconsin Historical Society. I Led Three Lives is a historically significant series and deserves to be rediscovered. 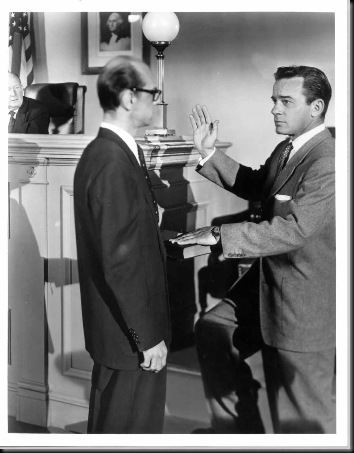 Richard Carlson as Herbert A. Philbrick prepares to testify

Our first clip is from a 1993 installment of the PBS documentary series Frontline in which Robert Oswald (as mentioned above) discusses his younger brother’s fascination with I Led Three Lives: 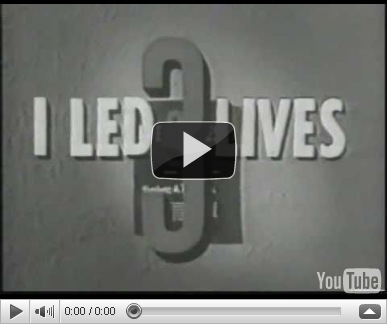 The next four clips are from the first of two pilots produced. They will give the reader/viewer a flavor of the panicky paranoia that was the hallmark of the show. 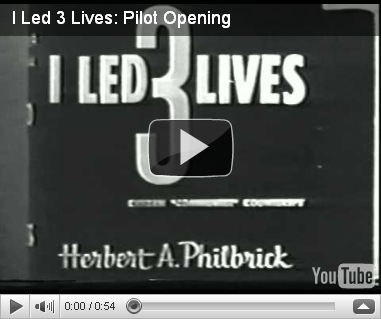 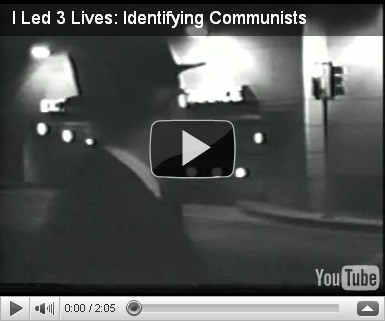 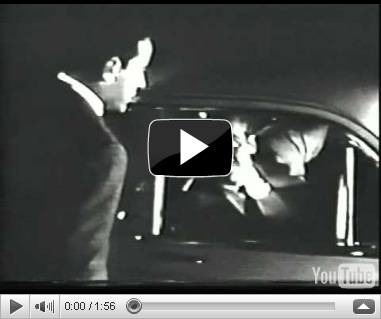 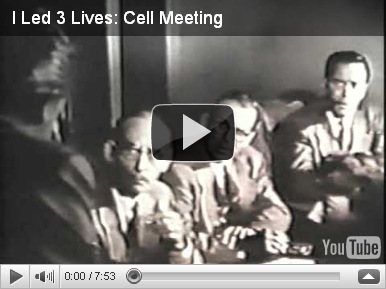 The next two clips are from “Dope Photographic,” the third episode of the series. In the first video, Philbrick identifies a new secretary in his office as a communist sent to spy on him. In the second video, Philbrick tries to mask the sound of a surveillance camera with his electric razor. It is one of the most absurd moments in the history of the show. 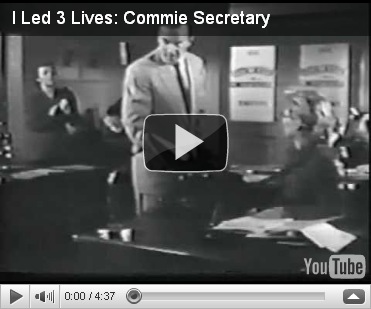 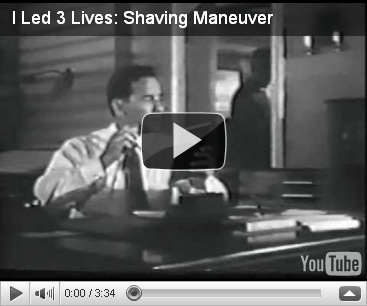 In the episode “Servicemen,” Philbrick witnesses the inner-workings of a sham lonely hearts club for servicemen staffed by pretty Communist girls. Eleanor Moore’s performance as the “madam” of the “Sweethearts for Servicemen” organization (Comrade Myra Houk) is a tour de force of bitterness. Trivia note: The exteriors for this clip were shot in Richard Carlson’s backyard at 3827 Holly Lane in Sherman Oaks, California. 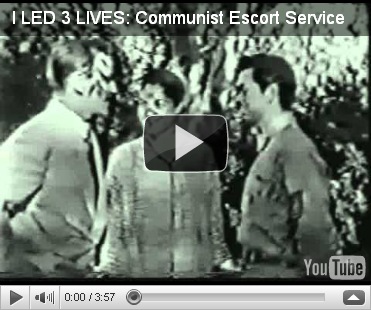 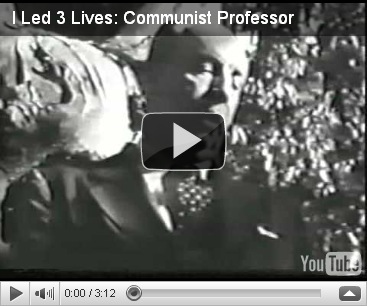 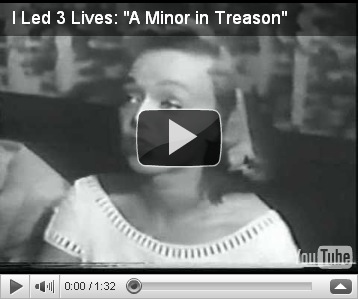 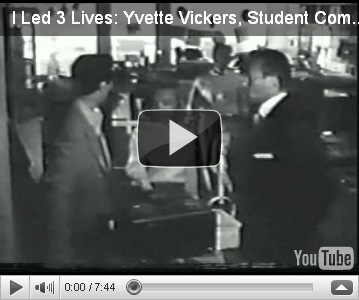 In this clip, from the episode entitled “Charity,” (which was broadcast in late December of 1955), Philbrick is derided by his fellow comrades for celebrating Christmas. He is then forced to help with a seasonal pledge-drive scam to enrich the Party. 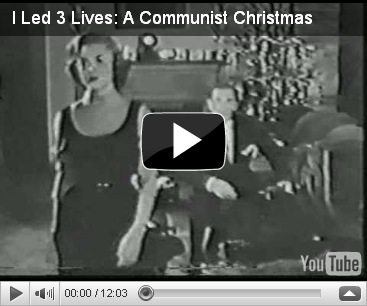 In this clip Philbrick complains—in his patented voiceover—about the drudgery of leading three lives. His propaganda writing is then critiqued by his fellow party members. 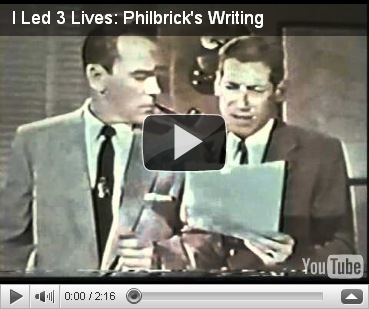 In the episode entitled “The Wife,” Philbrick’s wife, Eva, becomes increasingly suspicious of her husband’s activities. At the same time, Philbrick’s comrades are wondering why Eva isn’t a member of the Party. 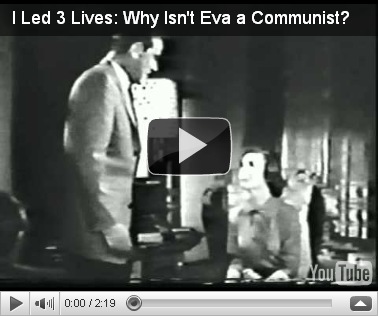 Later in the episode, Eva confronts Philbrick over Communist reading material that has been planted on his bookshelf by a fellow comrade. Philbrick then makes a startling confession… 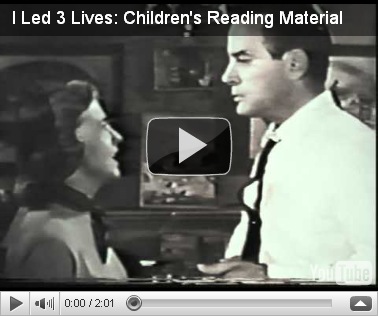 Finally, Eva learns another shocking, yet redeeming, fact about her husband… 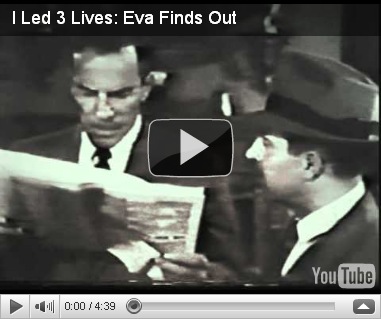 The following three clips are from the 1956 episode “Eva Purged,” in which Philbrick’s wife’s loyalty to the Party is questioned. At one point Philbrick is told to leave his wife. By 1972 Eva had been “purged” from Herbert A. Philbrick’s real life and his best-selling book. There is no mention of her or his children in the revised edition. The couple had divorced in the 1950s. The anti-Communist star re-married in 1961. 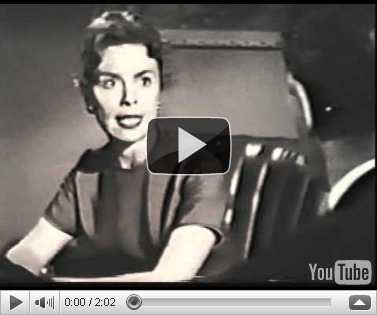 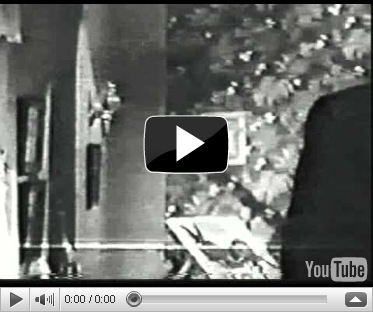 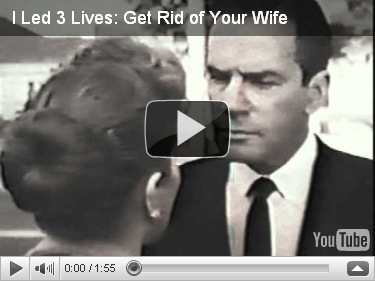 In the 1953 episode entitled “Civil Defense,” Philbrick and his paranoid fellow comrades discuss their plans for neutralizing America’s civil defense apparatus in Philbrick’s sedan. He calls it a “cell meeting on wheels.” For his 1975 thesis on I Led Three Lives, Dennis J. Rinzel  interviewed star Richard Carlson who did not have fond memories of this particular episode:

“…Really outrageously immoral, now that you think of it. You know, a television show presuming that the nasty Russians are going to drop a bomb. Number two, that the communists are not Marxists, they’re just terrorists who want to confuse everybody and get burned up by a bomb.”

Of course, Carlson was singing another tune when I Led Three Lives was on the air. In Walter Ames’s TV column in the February 15, 1954 edition of the Los Angeles Times he was Red-baiting like a champion:

“To date we haven’t received any threatening letters from the Commies, but we sure dare them to sue us. So far, there hasn’t been a peep out of any Red organization. I guess they’re afraid to question our stories.” 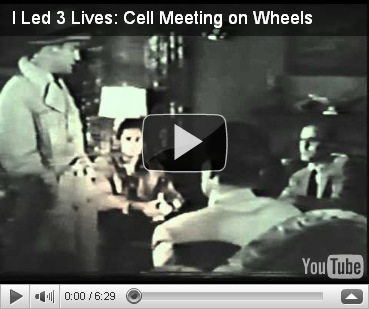 In the same episode as above, Philbrick joins his local civil defense office… 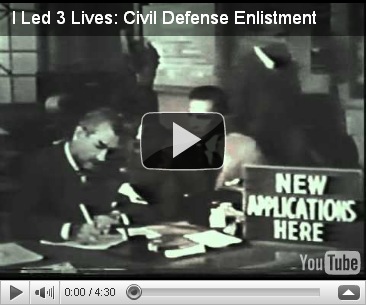 In the 1953 episode “Infra-Red Film,” Tor Johnson, an Ed Wood regular and Richard Carlson’s co-star from the motion picture Behind Locked Doors (1948), appears briefly as Comrade Ziroc, the owner of a Turkish bath house. 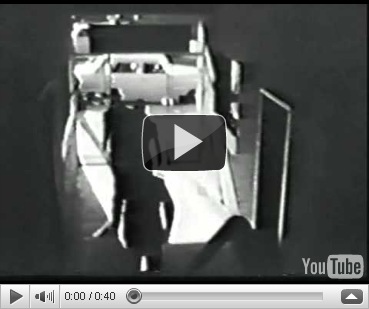 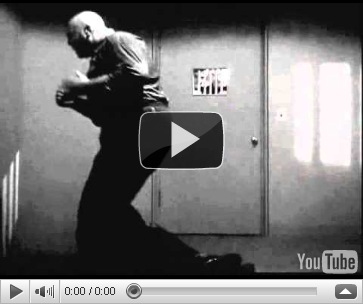 To conclude this post we thought we would present the entire episode of “Radioactive”-- one of two teleplays (the other being “Discredit Police”) that Star Trek creator Gene Roddenberry wrote under the name Robert Wesley. The plot concerns a deadly isotope that a rogue communist is trying to sell. Philbrick must expose himself to dangerous levels of radiation to help the FBI.

Roddenberry is quoted in Tom Stempel’s book, Storytellers to the Nation: A History of American Television Writing (New York: Continuum, 1992, p. 60), as having deep regrets over working on the series:

“It was fiction. I hate myself for having written two episodes. It was entirely trumped up.” 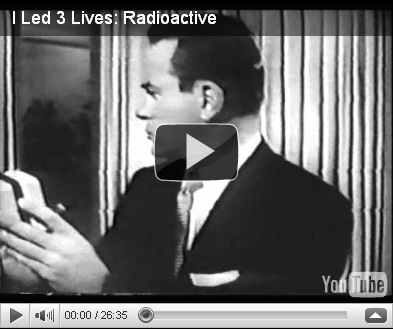 [3] Ibid. p. 3. Rinzel notes that the show was one of the top ten rated syndicated programs during its original three-year run and that it continued to earn high ratings in re-runs.

[4] Ibid. p. 88. Rinzel notes that the award was presented on February 22, 1956 by Admiral Arthur W. Radford, Chairman of the Joint Chiefs of Staff.

[5] Robert L. Oswald with Myrick and Barbara Land, “Lee: A Portrait of Lee Harvey Oswald by His Brother,” [New York: Coward-McCann, Inc., 1967], p. 47. Note: Robert Oswald repeated the story of his brother’s obsession with I Led Three Lives in 1993 for the PBS Frontline documentary “Who Was Lee Harvey Oswald?” A clip from this interview is embedded in this post.

Posted by Bill Geerhart at 3:48 PM

Before the series began, Richard Carlson stated that he worried that "we would be accused of red-baiting, the flavor of the times being what it is". Carlson`s good friend, actress Marsha Hunt(they made 3 pictures together-Marsha and her husband were married in Richard and Mona Carlson`s home) was blacklisted by the McCarthy HUAC.
Richard Carlson is one of my favorite actors. When I watch "I Led Three Lives", I don`t view it as fact, I see it as a fantastic adventure story brought to life by Carlson`s brilliant acting. I do hope the series will be eventually released on DVD.
Lorraine C.

Richard Carlson stated before the series he began that he worried that "we be accused of red-baiting, the flavor of the times being what it is". Carlson`s good friend actress Marsha Hunt(they made three pictures together,and Hunt and her husband were married in Richard and Mona Carlson`s home) was blacklisted by McCarthy HUAC.
Richard Carlson is one of my favorite actors. When I watch "I Led Three Lives",I don`t take it as fact, I view it as a fantastic spy/adventure story brought to life by Carlson`s brilliant acting.
Lorraine

I value and respect your opinion.
카지노사이트