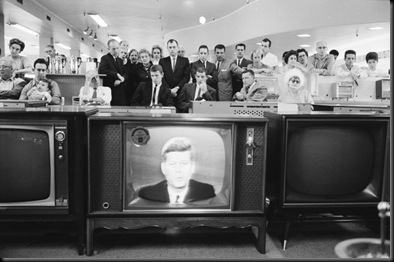 President John F. Kennedy’s October 22, 1962 address to the nation on the Cuban missile crisis was a critical Cold War moment that has long since entered the realm of legend. The dramatic televised speech that announced the blockade of Castro’s Cuba was hyped in advance by the media and was seen by 50 million American viewers.[1] People stopped at appliance store windows to witness the young commander-in-chief stand up to Khruschev in glorious black and white.[2] The seminal event of Kennedy’s brief presidency has been written about and analyzed endlessly and re-staged or excerpted for television dramas and major motion pictures. Everyone who lived through those times remembers the speech and everyone else knows about it—even if it is by watching a lame miniseries like The Kennedys.

Not nearly as well known is another televised address on the “Cuban Crisis” that occurred a few days later by Kennedy’s vanquished Republican rival for the White House in 1960, Richard M. Nixon. Two years after his razor-thin defeat for the highest office in the land, the former Vice President was locked in a tight campaign to unseat Democratic incumbent Edmund G. Brown as governor of California. Nixon, of course, would famously lose this race, but at the time of his speech he undoubtedly considered it a part of his grand strategy to earn a re-match with Kennedy in 1964. Governor Brown, meanwhile, was actually being briefed on the Cuban situation by the President in Washington as his opponent was taking to the airwaves.[3]

On Friday, October 26th Nixon announced to the press that he would “interrupt his campaign” because he would have “a statement of major importance regarding Cuba.” Perhaps because the candidate, a private citizen, did not have the power to start a nuclear war, the story only made it to page 4 in the Los Angeles Times. The article added that Nixon’s address would originate from San Diego and would be broadcast throughout the state.[4] Not exactly the stuff of stop-at-the-appliance store appointment viewing. 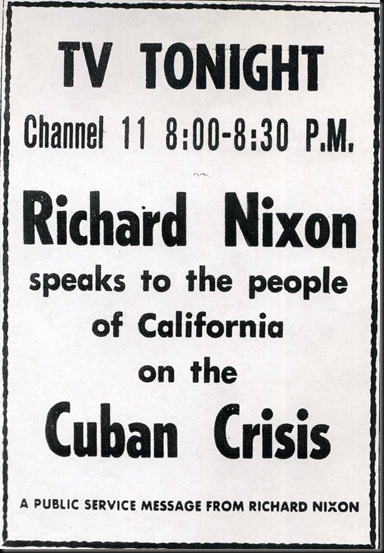 On Saturday, October 27th at 8:00 P.M. Nixon went up against The Roy Rogers and Dale Evans Show and something called Restless Guy to speak to the people of California.[5] In his remarks he endorsed President Kennedy’s “strong action” in the crisis, assailed Fidel Castro as a “hot blooded maniac,” dismissed the possibility of war (“Mr. Khruschev is not going risk Moscow for Havana”) and urged the rejection of a deal that would remove U.S. missiles from Turkey (a “horse for a rabbit” trade according to the veteran politician).[6] 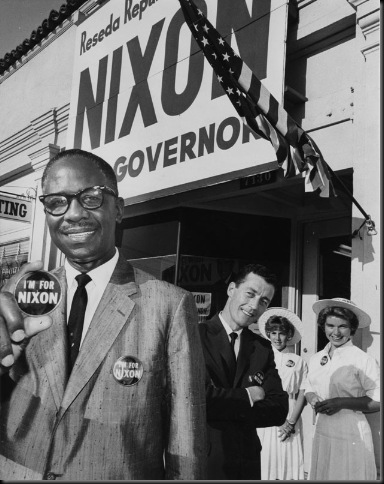 The next day Governor Brown, back from his trip to Washington, criticized his rival’s speech as a “new turn in a spurious and reckless campaign.” He added that Nixon’s effort to win the governor’s race was “bankrupt and going downhill.” A Democratic backer of the former Vice President was kinder, stating that Nixon’s views on the crisis represented “the realistic maturity of his understanding of the Communist conspiracy at home and abroad.”[7] 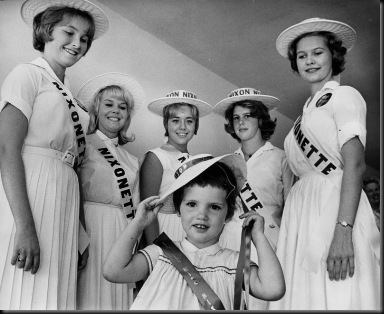 Mrs. Patricia Hitt, an Orange County Republican National Committeewoman, haughtily called upon Brown to retract his remarks on Nixon, saying: “Pat Brown is obviously trying to conceal his lack of knowledge on international affairs…These comments by Mr. Brown are so much in violation of the Constitution that I suspect his words must be those given by one of his press agents.”[8] 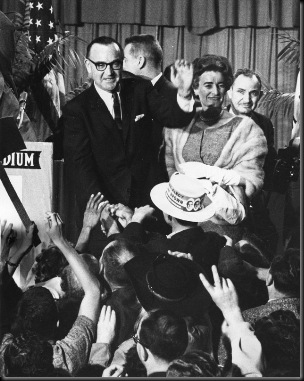 Mrs. Hitt was no doubt shocked when her candidate lost the race to Governor Brown on November 6th prompting the notorious “last press conference” the following day. Nixon would rise from the ashes six years later and win the White House, but his Cuba speech remains nearly forgotten. CONELRAD is still waiting to hear back from the Richard Nixon Presidential Library and Museum to see if they have a transcript or film of the television special. We will update this post if we are ever able to find more on Richard Nixon’s Cuban Missile Crisis Moment. 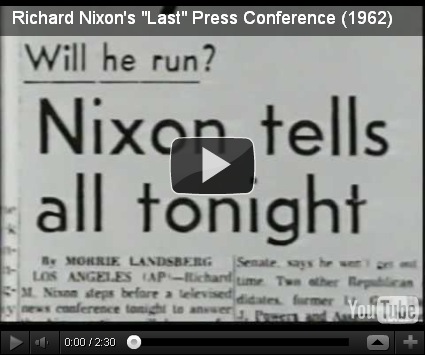 Posted by Bill Geerhart at 1:06 PM

Got a real hate on for Nixon eh? js