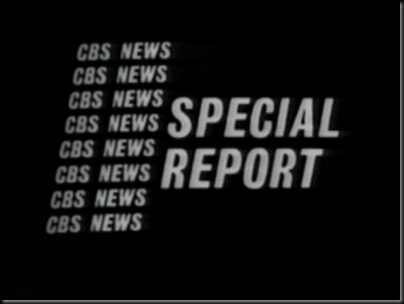 “When the American people elected Kennedy they made a good choice. Nixon might have been a good president, too, but Kennedy proved that he was. If Kennedy wasn’t killed he might have become the greatest president ever. He also might have started a atomic war and destroyed the world.”

--Excerpt from a letter written by John Compton, eighth grade[1] 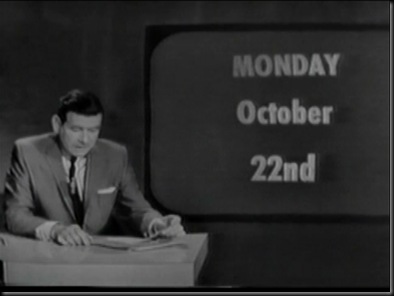 We have decided to wrap up our series on “Cuban Missile Crisis Recovered Memories” with some random news snapshots and oddities that caught our attention while reading about the crisis on microfilm, in history books and on the web. We may have more posts on this subject in the future but, for now, this is our fond farewell to that magical period when the end seemed so very close. 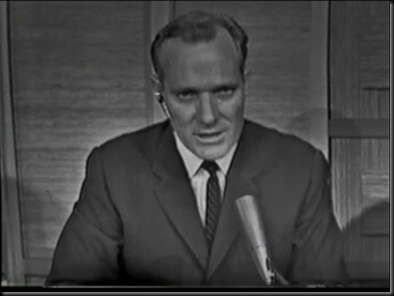 We begin with an advertisement from page G9 of the October 28, 1962 edition of the Los Angeles Times. The sales team for the Palley’s chain could not resist offering reduced prices on civil defense equipment “in these critical times.” 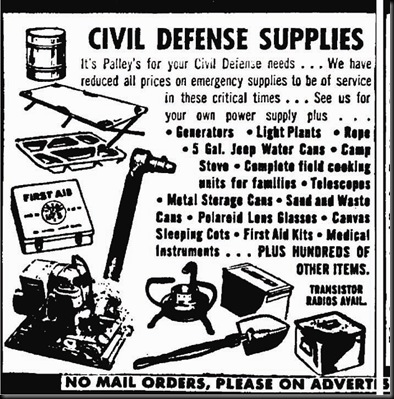 One of the choices facing local civil defense authorities during the Cuban Missile Crisis was whether or not to test air raid sirens. In Los Angeles, CD officials (at first, anyway) saw no reason to deviate from their normal schedule. Newspapers advised readers not to “panic.” 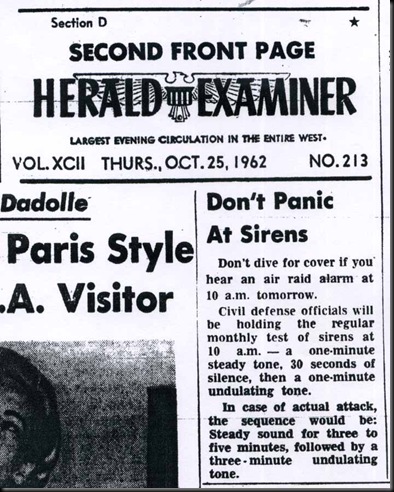 As the fears over Cuba mounted, California state CD authorities thought better of the notion of testing sirens during an international crisis and requested a moratorium. But there were a few overzealous cities that decided to keep to their monthly schedule regardless of the world situation… 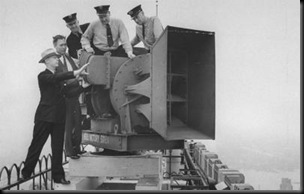 In Los Angeles area supermarkets, a two-day wave of “panic buying” was touched off by a civil defense official’s call for Angelenos to stock up. 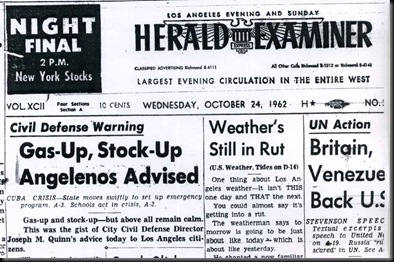 Los Angeles residents like Mrs. Woronovich of Baldwin Hills took heed of the advisory and spent a whopping $55.85. 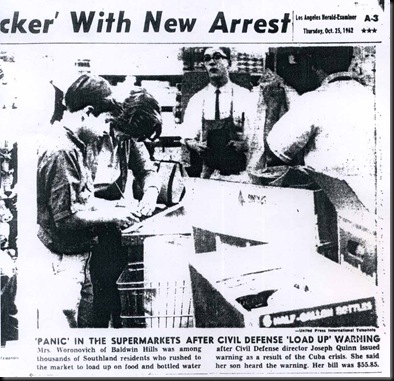 Meanwhile, in Houston, Texas, a customer spent $600 on groceries and headed straight for his fallout shelter. 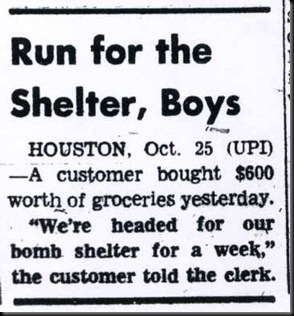 In Bakersfield, California, worried consumers were adding firearms to their shopping carts…

Protesters took both sides of the issue… 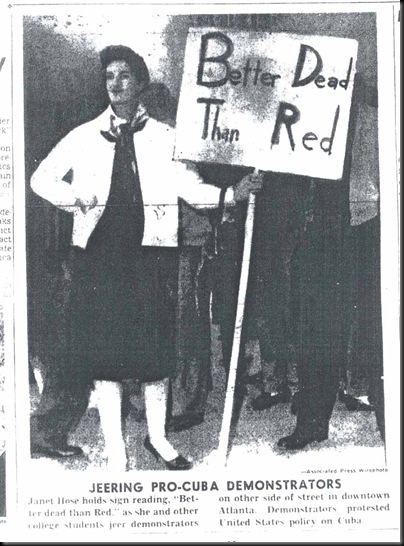 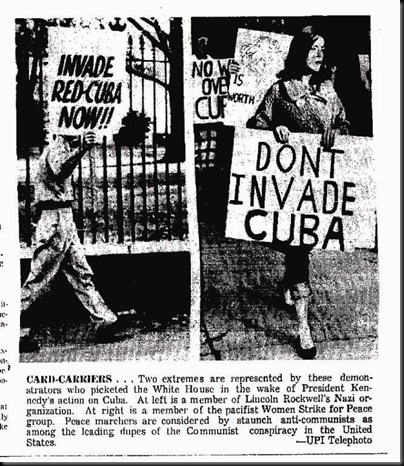 In some cases, activists simply got tired and went home… 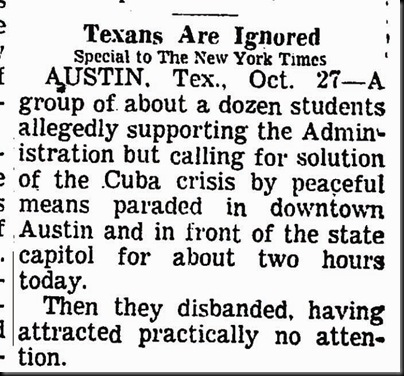 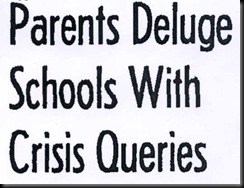 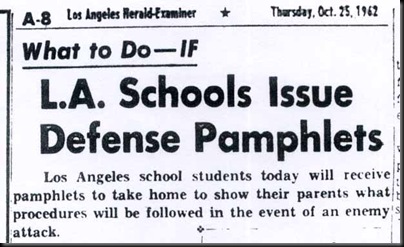 Even the travel industry was concerned about the Cuban Crisis…

As reported in the November 8, 1962 issue of Jet magazine (page 10), panic over the Cuban situation was so great that it led to a declaration by New Orleans Civilian Defense Director Col. Charles W. Erdman that public fallout shelters would be open to everyone, even “negroes.”

Miamians, arguably the ones most likely to be incinerated, were told to remain calm and treat the imminent threat of atomic attack as they would a hurricane. 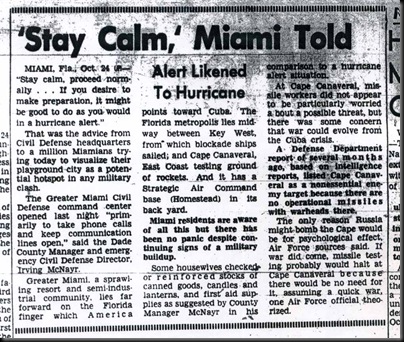 Cubans, meanwhile, were told that an American invasion would fail (and with ninety tactical nuclear weapons ready to repel the United States military, this headline has the retroactive ring of truth).

One woman was so frazzled by the Cuban crisis that she evacuated her city without her children. She realized that they were missing when a military policeman directing traffic in Key West, Florida stopped her. During the course of their brief conversation in which the woman referenced her kids, the officer pointed out that he saw no children in her vehicle. “My God, I forgot them!” she exclaimed. 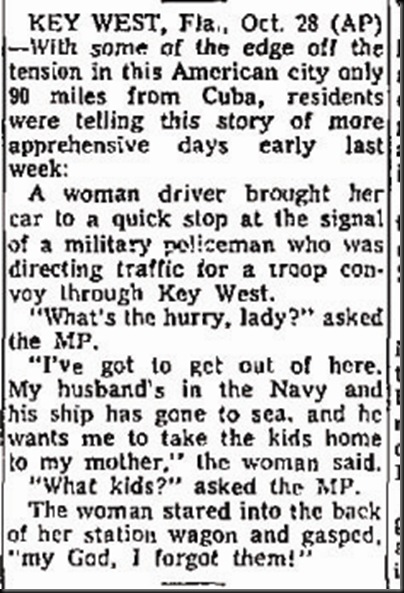 Perhaps it was the culmination of all the random weirdness and conflicting emotions that the Cuban Missile Crisis unleashed that led a Los Angeles woman named Marion Miller, age 59, to take an overdose of sleeping pills. The Los Angeles Herald-Examiner reported in their October 25, 1962 edition that the distraught woman wrote in a would-be suicide note that “I don’t like the appalling international situation.” 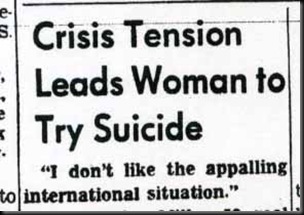 Fortunately, Marion Miller failed in her suicide attempt and so did the two superpowers that so depressed her. 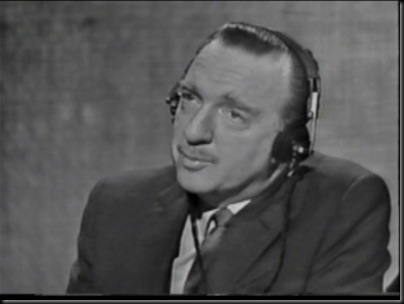 Michael Dobbs, One Minute to Midnight: Kennedy, Khrushchev, and Castro on the Brink of Nuclear War [New York: Knopf, 2008].

Aleksandr Fursenko and Timothy Naftali, One Hell of a Gamble: Khrushchev, Castro, and Kennedy, 1958-1964: The Secret History of the Cuban Missile Crisis [New York: W.W. Norton and Sons, 1997].

I like it so much, please try to keep posting.

Let me introduce other material that may be good for our community.

eToro is the most recommended forex trading platform for new and advanced traders.