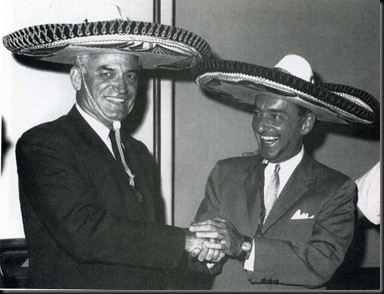 Barry Goldwater and running mate William Miller get festive in ‘64

Decades before the Birther movement and the numerous challenges to Democrat Barack Obama’s constitutional right to serve as the President of the United States, the Republican Party had its own citizenship issue to deal with. On September 4, 1964 the flamboyant San Francisco attorney Melvin A. Belli filed suit to

remove GOP presidential nominee Senator Barry M. Goldwater from the California ballot because the candidate was born in Arizona before it became a state.

Unlike the persistent and mostly racially motivated conspiracy theories about President Obama’s place of birth, Belli’s client’s* claim was at least rooted in fact. Goldwater was born on January 2, 1909 when the Grand Canyon State was still a territory (it became the 48th state on February 14, 1912). 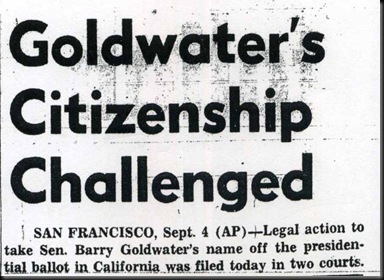 What was essentially a publicity-generating nuisance suit was quickly denied by California’s Supreme Court without comment. Belli vowed to fight on in other states despite the fact that court precedent had established that persons born in U.S. territories were American citizens. In the end, the story died a swift death and on November 3, 1964 Goldwater lost the election in a landslide to Lyndon Baines Johnson.

The question of Senator Goldwater’s citizenship was aired in the media for exactly one week. It is now an obscure bit of trivia that most political geeks are not even aware of. It is a shame that the disproven but highly vocal claims of the Birthers will follow President Obama into the history books. 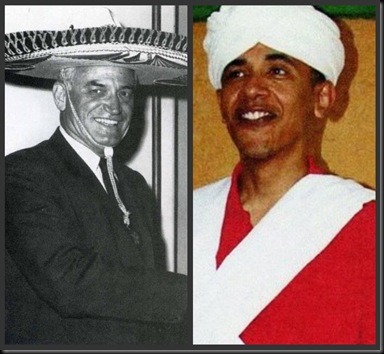 * The official plaintiff was Belli’s “office engineer,” Arthur Jackson, but publisher Ralph Ginzburg was the person who funded the suit. Belli told the Associated Press that Jackson was selected because “he had more real interest in the case than anyone else.” The AP noted, in the next paragraph of its story, that “Jackson is a negro.”

Melvin Belli, of course, went on to talk to the Zodiac Killer and appear on Star Trek.