Back in 2013 we posted an article that detailed how members of the United States Congress would be notified of their post-apocalyptic accommodations in the event of a national emergency. To summarize this protocol we’ll quote from a February 10, 1961 FBI memo:

The delivery system for this top secret information was decidedly low-tech. Indeed, once the lawmaker had identified him or herself to the satisfaction of the FBI field officer, he or she was to be handed a sealed business envelope that contained the location of the Congressional relocation site.

This procedure, which was approved by the Office of Civil Defense Mobilization (OCDM), was put into place shortly after the issuance of the above quoted document. 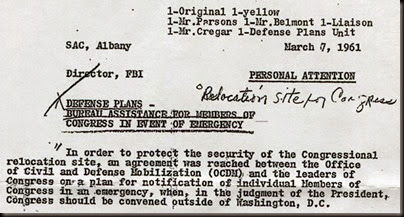 On March 7, 1961 another memo was sent out to the Albany, New York FBI office along with the sealed envelopes for distribution to each field office.

Once received, the envelope was to be filed in each office’s defense plan documentation as “Appendix 25.” As a reminder, the memo cautioned: “these envelopes should not be opened, except in the event the condition cited previously exists…”

As mentioned in our previous post, this plan was in effect through at least 1977 when the Director of the FBI ordered an inventory of all the envelopes to make sure that they were still in place and sealed (miraculously, most were). During the course of our research we found no evidence to suggest that the original notification protocol was ever changed during the life of the bunker. As most readers know, the relocation site’s covert existence at the Greenbrier resort in White Sulphur Springs, West Virginia was exposed in 1992 by the Washington Post.

When we were examining the FBI War Plans on Government Attic for our original post we were surprised to see that “Appendix 25” was specifically mentioned and explained, but not yet declassified. This seemed especially odd given that public tours have been running through the Greenbrier bunker since 1995. So on October 21, 2013 we filed a Freedom of Information Act (FOIA) request with the FBI for a complete copy of file number 66-17388 captioned “Defense Plans – Bureau Assistance for Members of Congress in the Event of Emergency” including the contents of Appendix 25. We even asked for a photocopy of the envelope. 425 days later, on December 19, 2014, we received precisely what we asked for. 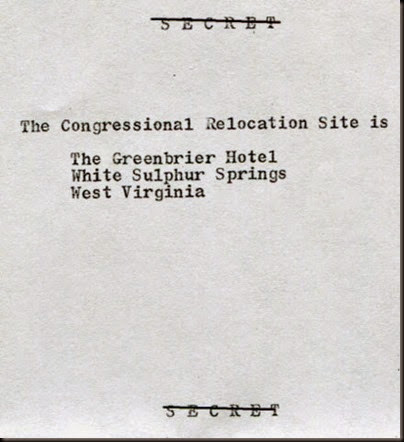 Even though we knew what was in the envelope, it is still interesting to see exactly what a member of congress would have seen if, say, the Cuban missile crisis had taken a turn for the worse. What would his or her reaction have been upon tearing open the envelope? Confusion? Amused surprise? No FOIA response will ever be able to answer that question.