Several years ago CONELRAD posted an article detailing our exhaustive investigation into the claims that movie star Rita Hayworth’s image adorned the fourth atomic bomb ever detonated: The Able device exploded at Bikini Atoll on July 1, 1946. The article was the result of many months of research that included correspondence with archivists from the National Archives and the Los Alamos National Laboratory as well as interviews with some of the men who participated in the Operation Crossroads Able test. We concluded that Ms. Hayworth’s likeness was not on the Able bomb, but that a stencil of her then current hit film, Gilda, was. We based this finding on the majority of the interviews that we conducted and, more significantly, on the archival government film footage of the bomb itself.

Of the six Crossroads participants that we interviewed only Leon D. Smith, the weaponeer onboard Dave’s Dream, the plane that dropped the Able bomb, insisted that he saw Rita Hayworth’s image on the weapon. Smith was quite specific in his recollection. He told us the following about the image during our interview with him:

The then 88-year-old retired electrical engineer added that one of the reasons he remembered the image so clearly was because “[Hayworth] was very popular with us [servicemen and scientific support personnel] because we had been overseas and sort of starved for sex. And we had pictures of Rita overseas, so I was just delighted to see her picture on the bomb.”

But in evaluating all of the evidence that we had uncovered and taking into account the reliability of human memory after so many decades, we decided to side with the majority recollection of our interviewees as supported by the only released footage of the bomb. In the end, despite our best efforts, we could not find the hard proof needed to validate Leon D. Smith’s colorful and vivid memories.

As it turns out, though, Mr. Smith was right all along and we could not be happier.

Indeed, we are delighted to be able to announce that the evidence that we failed to locate in 2008-2009 magically appeared in our e-mail inbox earlier this month. The following images—published for the first time by CONELRAD—are stills captured from a film roll that came from the Los Alamos National Laboratory and they are presented here with permission. 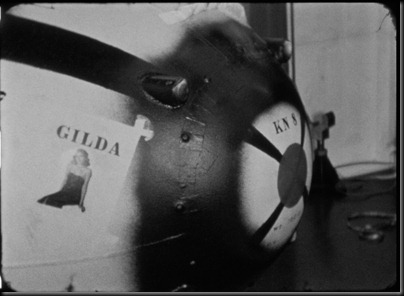 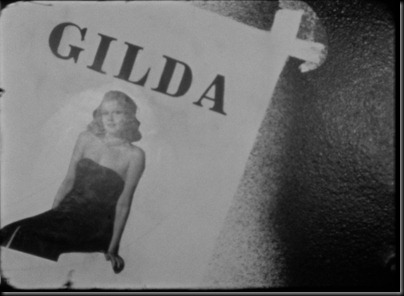 Atomic documentarian Peter Kuran, the guardian angel who thought of CONELRAD when he discovered the historic film, told us that the footage “came out of a can without classification.” Kuran later added that the quick shots of Hayworth’s image on the Able bomb appear at the beginning of a roll of film that, for whatever reason, was not released to filmmaker Robert Stone when he attempted to get all Crossroads bomb footage declassified for his 1988 documentary Radio Bikini.[1]

Los Alamos’s historian, Alan B. Carr, told CONELRAD that he had never seen the Hayworth images before Peter Kuran showed them to him and that the film roll in question is considered “unclassified.” Carr is not sure when the film was declassified or if it ever was considered classified. Kuran hopes to use the footage for an upcoming video project. CONELRAD will notify its readers when it is released. In the meantime, readers can view Kuran’s impressive archival handiwork on his YouTube channel.

The final mystery then is where did this particular Rita Hayworth image come from?

When CONELRAD was researching its original “Atomic Goddess” article we found varying press accounts as to how Hayworth’s image was presented on the Able device. One article improbably claimed that it was a carefully rendered portrait painted by three artists. Operation Crossroads official Thomas Lanahan told United Press in 1946 that the image was an advertisement for Gilda that was cut out of an Esquire magazine. However, sixty-three years later he was certain that only a stencil of the name “GILDA” was marked on the weapon. Leon D. Smith told us that he remembered it being a painting.

Now that we were able to actually see the Hayworth image as it appeared on the bomb, we decided to revisit Lanahan’s original version of events as told to the wire service.[2] His comments, via UP, were published in the June 30, 1946 edition of the Philadelphia Inquirer:

“We stenciled the name in two-inch black letters. Then somebody suggested we needed a picture, so we found an old copy of Esquire and cut out a movie advertisement for Gilda.”

CONELRAD had already examined Esquire on microfilm for the period in question for our earlier article, so we instead tried to find the image on the Internet. No luck. We also checked with a few prominent commercial photograph archives.[3] These companies had dozens of Gilda-era Hayworth shots, but not the one that appears on the bomb.

We then consulted with Adrienne L. McLean, the author of Being Rita Hayworth: Labor, Identity, and Hollywood Stardom, and she was able to produce from her personal collection a very similar image to what is on the bomb. Specifically, McLean provided us with a photo of a sheet music book for a Mel Tormé song from 1946 that featured Hayworth on the cover. 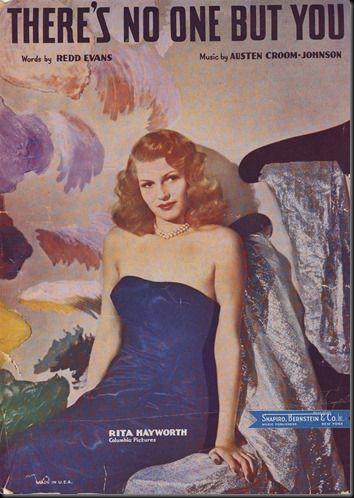 But it wasn’t quite the same art that graced the bomb. It may have been a shot taken seconds before or seconds after the image that is on the bomb. So we decided to take one last careful look at Esquire on microfilm at the Library of Congress. We requested microfilm of the magazine from June 1945 through October of 1946 to cover all bases.

As we were nearing the end of our meticulous scrolling, the elusive photograph appeared on page 78 of the June 1946 edition! The pin-up, credited to legendary Hollywood photographer Bob Coburn (1900-1990), was a dead ringer for the image on the bomb, but we still wanted to see the original shot as it appeared in the actual magazine. It was immediately obvious that the dark microfilm scan that we took did not do justice to Mr. Coburn’s camera magic. So we ordered a copy of the original issue on eBay. 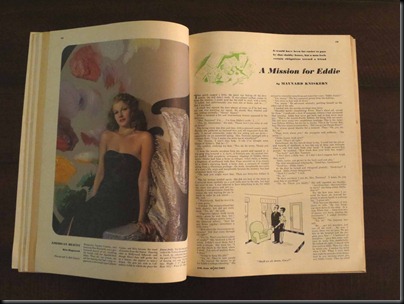 The 10” x 13” magazine (Esquire has shrunk considerably since the 1940s) arrived in the mail a few days later. The full color Hayworth portrait, titled “American Beauty,” pops off the page. The dress that she is wearing is an earlier version of the Jean Louis-designed Put the Blame on Mame evening gown seen in Gilda. The text at the bottom of the page gives a brief biography of the actress, plugs for her current films and her measurements. 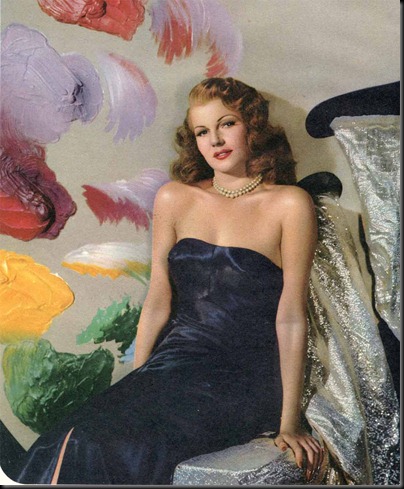 We consulted with artist David K. Landis of Shake It Loose Graphics for his professional analysis of whether the Esquire shot is the same image that was cut out and affixed to the bomb. Landis told us that he believes that it is. Some readers may be wondering why the white necklace from the Esquire photo is not visible in the bomb images. As Mr. Landis pointed out to us, it is visible, but just barely. It is possible that the lights used with the motion picture camera that filmed the bomb were responsible for washing out the finer definition of the necklace. One also has to consider how far away from the weapon the camera may have been. 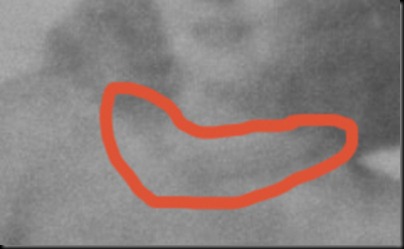 From examining earlier images of the bomb (when the “GILDA” stenciling was still being touched up and before the Hayworth photo was added), Landis was also able to explain the hard-edged white surface that appears in the later shots of the bomb with the Hayworth image. He told us that this was the result of someone covering that area of the bomb with a sheet of paper to protect it from the black sealant spray that was applied at some point after the shot of the man working on the stencil painting of “GILDA.” 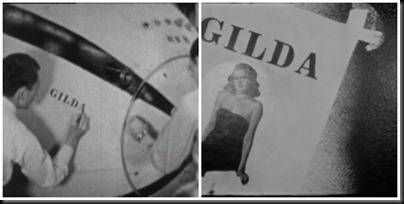 When we called Thomas Lanahan, the man who still has the original “GILDA” stencil, to tell him the good news about finally finding the evidence to support the complete Rita Hayworth atomic bomb story, he told us that he still remembers the Esquire shot. It is a testament to the beauty and star power of Rita Hayworth that a 92-year-old man remembers a pin-up photo from 1946. Of course, the unusual backdrop Lanahan and his buddies chose for the picture is pretty memorable, too. 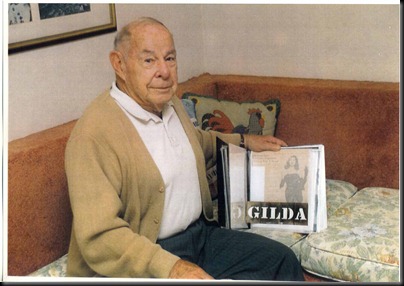 We’ll close this post by revisiting the June 30, 1946 Orson Welles ABC radio broadcast in which the famous film auteur commented on his wife’s imminent role in the Operation Crossroads atomic test. The recording is made all the more extraordinary now that we know for a fact that the image was on the bomb.

This post is dedicated to Dave’s Dream weaponeer Leon D. Smith whose memory served him so well when we asked him about Rita Hayworth’s image being on the atomic bomb four years ago. Unfortunately, he passed away at the age of 92 on October 14, 2012 and was denied the right to tell us he “told us so.” For the record: he told us so.

Thanks again to Peter Kuran for thinking of us when he made his amazing discovery. And thanks to Los Alamos National Laboratory historian Alan B. Carr for granting CONELRAD permission to publish the Rita Hayworth atomic bomb images.

Thanks to Adrienne L. McLean for her Hayworth-centric photographic memory and her general guidance on the movie icon.

Finally, thanks to Wellesnet for their online preservation of the remarkable 1946 Orson Welles Bikini radio commentary. [1] Historian Alan B. Carr, who was not yet working for the Los Alamos National Laboratory when Robert Stone submitted his Freedom of Information Act requests for Operation Crossroads footage, suggested in an August 14, 2013 email to CONELRAD that there are a couple of theories for the why the filmmaker never received the footage with the Rita Hayworth image. One theory is that some of the films Stone requested may not have been under the purview of the Los Alamos archives in the mid-1980s. These films may have been under the control of the testing division and it is possible that Stone’s request did not filter down to this department. Another theory is that the film itself was overlooked. The field testing motion picture collection, according to Carr, contains thousands of films and that there is no “user-friendly database.” For the last couple of years Carr has been leading an effort to organize and preserve these historic films.

[2] It is important to note that in all of the voluminous press clippings we examined on this topic, Thomas Lanahan is the only person quoted by name about the Gilda stencil and the Hayworth image on the Able atomic bomb. For a complete list of newspaper and magazine citations, see our original article.

[3] CONELRAD also checked with the Margaret Herrick Library in Beverly Hills for the Rita Hayworth image. Their initial search did not locate the photo we were seeking.