As we mentioned in Part One and Part Two of our series, the Cold War era meeting minutes from the top secret government relocation site known as Mount Weather (aka The Special Facility, aka High Point, aka the Classified Location) are not what the average person would consider interesting. But when you stop to remind yourself every few pages that the notes were produced by men in a Stranglovian underground office park, they suddenly become fascinating in their utter banality. Here are the highlights from the minutes issued in 1966.

The year began with a request about bunk beds and a suspicious increase in requests for aspirin.

The January 20, 1966 meeting began with an apparent reference to the major broken arrow incident over Palomares, Spain that had occurred just three days earlier. We’re not sure why the state of Florida is cited here unless it was a mistake on the part of the recording secretary. In view of the seriousness of the Palomares event which involved four hydrogen bombs, it is hard to imagine that the Special Facilities team would have been discussing any other nuclear accident.

With the near apocalypse of Palomares barely behind them on January 27, 1966, the issue of whether people should be allowed to sleep in the executive suites during inclement weather was discussed. This request was vetoed.

On February 3, 1966 the persistent rumors of snow removal favoritism on the part of Loudoun County for the Special Facility was brought up.

On March 17, 1966 the Chairman discussed the second, less well known outbreak of rioting in the Watts section of Los Angeles. Per the front page of the Los Angeles Times on March 16, 1966, two people were killed and 25 were injured on March 15. This excerpt also mentions Farris Bryant being nominated to head the Office of Emergency Planning – the agency that had oversight over Mount Weather. Bryant’s predecessor was Buford Ellington.

On April 21, 1966 the issue of the Russians renting property near Mount Weather was discussed. CONELRAD was able to find a number of news clips from the local Berryville, Virginia newspaper as well articles in larger circulation papers. The Soviet Embassy had rented a Virginia estate known as Spout Run Farm (formerly known as Heartsease) near Berryville to use as a children’s summer camp.

The Associated Press dutifully quoted “State Department officials” as saying “the Defense Department had been informed of the proposed lease on the Clarke County property to the Russians and that the Pentagon had not reported any sensitive U.S. installations being in the area.”[1]

The local paper was more honest about the worst kept secret in Berryville. In an editorial published in the Clarke Courier on April 28, 1966: “…somebody should have thought this thing out more clearly before allowing the Soviet Embassy to establish a summer camp and recreation area within a short distance of an apparent vital installation such as Mt. Weather.”[2]

On May 5, 1966 there was another cryptic mention of local “publicity.” This was apparently a reference to a front page article in the Clarke Courier newspaper on the Soviet summer camp complete with photo of the property.[3] 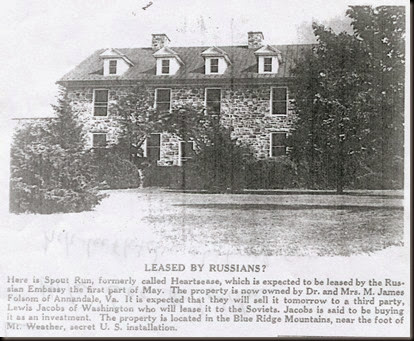 Without the full transcripts of these meetings, it is hard to know exactly what the senior staff at the Special Facility thought of the Russians moving in next door. They almost certainly believed that the Soviets knew about the Special Facility and its purpose. Indeed, in the first comprehensive news story on Mount Weather in Time magazine in 1991, Ted Gup wrote: “…it is assumed that all along the Soviets have known both its precise location and its mission.”[4] The meeting minutes strongly suggest that the attendees were more concerned with local media attention to the site than they were about Soviet spying.

The June 9, 1966 notes highlighted a problem with Western Union not delivering to relocation sites.

The June 23, 1966 minutes provide a push for the FARs (Federal Agency Representatives at Mount Weather) to participate in the company picnic.

In July, the Chairman attempted to cut down on the frequency of meetings during the summer months. This was not approved.

On July 14, 1966 and August 4, 1966 there was more discussion about the publicity over the Soviet summer camp at Spout Run Farm. CONELRAD was unable to find these particular news clips.

Before their meeting on September 15, 1966 the FARs (Federal Agency Representatives) watched on “TV receivers” the landing of the manned Gemini 11 spacecraft.

On October 27, 1966 the chairman previewed what was expected to be an unpopular decision regarding bus service to and from the Special Facility.

On November 17, 1966 Mount Weather employees were complaining about the “curtailment” in bus service.

On December 15, 1966 there were announcements about the holiday meeting schedule and “the nuclear war plan.” Just in time for Christmas!

Posted by Bill Geerhart at 1:38 PM

I sent Bill an email awhile back about this because I didn't really want to write an open comment and would have rather had you correct it or look into it anyway.

I really don't think they were talking about Palomares. Especially because of the date. That morning, 20 January 1966, there was indeed a nuclear weapons incident in Florida involving a nuclear warhead equipped RIM-2D Terrier Surface to Air Missile. The warhead separated from the missile's body and fell about 8 feet from the missile launcher onto the deck of the USS Luce (DDG-38) at Mayport near Jacksonville, FL.

No one was injured and the warhead's casing was only dented. Needless to say, no material was released nor any radiation, so it doesn't commonly appear in literature about nuclear weapons accidents or in anything about Floridian Military History. I know Florida History specialists and professors who don't even know about it for that matter.

Anyway, check out https://www.fas.org/sgp/othergov/doe/cg-hr-3/appb.pdf and look on the second page, first paragraph on the second column.

The dates match up, it was indeed an incident in Florida involving a nuclear weapon as it states in the meeting minutes, and it makes sense that Special Facilities would discuss it since it was an incident in the CONUS, which they were responsible for, as opposed to talking about an incident in Spain where they had no real responsibility for. It is impossible to know for certain, unless the meetings were taped and somehow the tapes survived, but I think there's a pretty good case to be made that they really did mean Florida.

Anyway, I love this blog, I'm an Emergency Management major and its nice to see that somebody out there cares about our field's history. I'm probably the only new guy in the field that actually knows about Civil Defense. What amazes me is that you guys don't work in EM (at least not according to your profiles), so keep it up.

If you're searching for the #1 Bitcoin exchange company, then you should go with Coinbase.

I must thank you for the efforts you’ve put in penning this website. I’m hoping to view the same high-grade blog posts by you later on as well. In truth, your creative writing abilities has encouraged me to get my own site now

Hi! I just want to offer you a huge thumbs up for the excellent info you’ve got here on this post. I will be returning to your web site for more soon.

Very good article, I think I will get a lot of benefits after reading all the articles here. Good work, friends, and continue to work and provide benefits to everyone. Here on our site we also have some help to make it easier for you. http://sbobett.asia/.