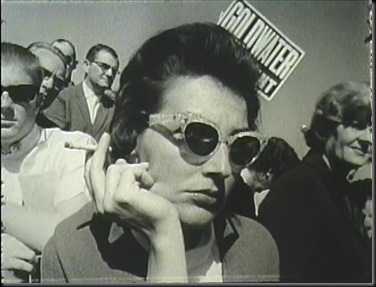 One of the more entertaining sideshows of the 1964 presidential election was the Barry Goldwater campaign front group known as Mothers for Moral America (MfMA). The purpose of this quickly assembled “organization” was to provide nominal sponsorship (and thus plausible deniability for the candidate) of a political film attacking President Lyndon Johnson for a rising tide of riots, pornography and Twist dancing. Today, with the exception of a small, but devoted circle of political nerds, the film (Choice) is largely forgotten. However, at the time, as difficult as this might be to imagine, the movie was even more controversial than LBJ’s notorious Daisy spot. 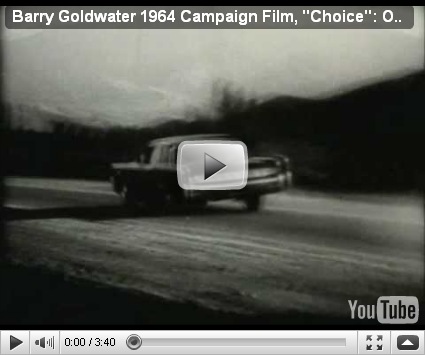 The National Coordinator for MfMA was Carol Arth Waters*, the wife of a fellow Orange County, California conservative named Daniel C. Waters. Mrs. Waters was responsible for issuing the sole piece of correspondence (that we could find) on behalf of the group. The message, seen below, is a call to arms in the fight for a return to “law and order” and “moral leadership.” Nowhere in the text (or the accompanying pamphlet literature) is Senator Goldwater mentioned, but the underlying message is clear: the country has gone to hell since the Democrats have been in power (sound familiar?) and there's only one man who can right the ship of state.

The National Committee for MfMA, as immortalized on the group’s stationary, is a who’s who of prominent Republican women including Nancy Reagan, Mrs. William F. Buckley, Sr., Hedda Hopper, Dale Evans and Mrs. Buddy Ebsen. When contacted by CONELRAD, a spokesperson for Mrs. Reagan stated that the former first lady had no recollection of MfMA or its mission. “That was many years ago and many organizations ago,” explained the representative.** 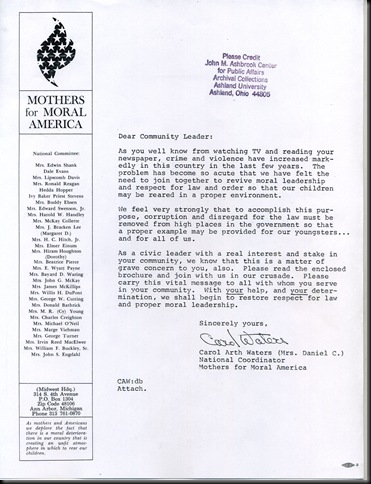 As originally devised by the more adventurous Cliff White-led faction of the Goldwater campaign, Choice was to be the crowning achievement of the MfMA “movement.” Alas, because word of the film’s “shocking” content was leaked to the media just before it was set to air on network television, the project quickly imploded. Goldwater—reacting to accusations that the riot footage in Choice was racist—disowned the movie and vetoed its scheduled nationwide broadcast. This edict, however, did not deter true believers in local precincts from screening the film for other zealots and curious liberals (prints had already been sent out to campaign offices around the country). 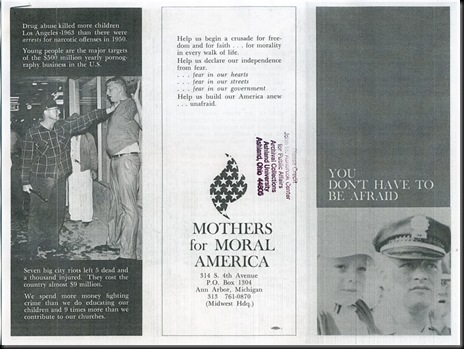 The controversy over Choice thrust MfMA into the spotlight and inspired some interesting hate mail that CONELRAD obtained from the archives of the John M. Ashbrook Center for Public Affairs at Ashland University in Ashland, Ohio. We are very pleased to be able to present some of that correspondence here. 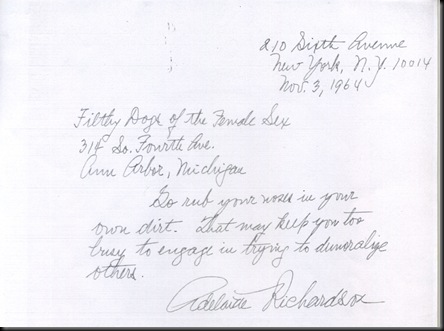 
Go rub your noses in your own dirt. That may keep you too busy to engage in trying to demoralize others. 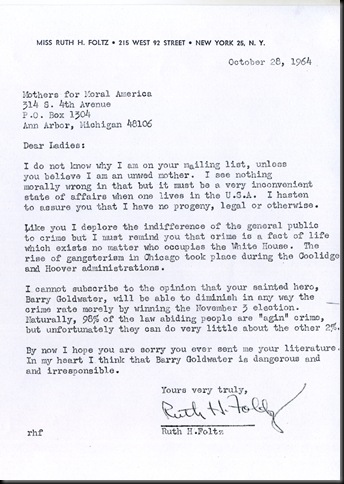 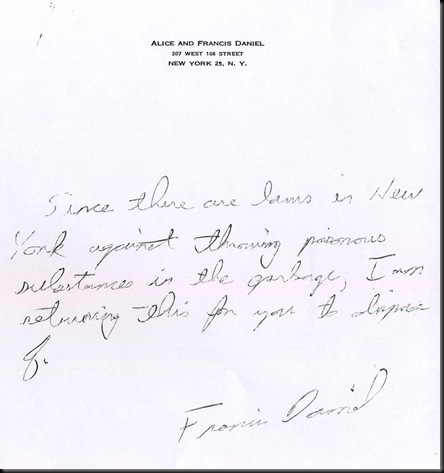 Since there are laws in New York against throwing poisonous substances in the garbage, I am returning this for you to dispose of. 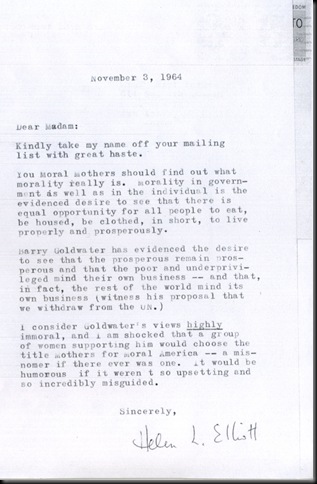 5: An Immoral…Happy American Who Voted for LBJ, All the Way: 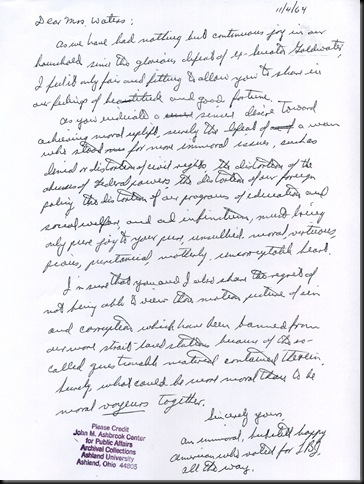 As we have had nothing but continuous joy in our household since the glorious defeat of ex-Senator Goldwater, I feel it only fair and fitting to allow you to share in our feelings of beatitude and good fortune.

I’m sure that you and I also share the regret of not being able to view the motion picture of sin and corruption which have been banned from our more straight-laced stations because of the so-called questionable material contained therein. Surely, what could be more moral than to be moral voyeurs together.

An immoral, (illegible) happy American who voted for LBJ
All the way.

Contrary to the impression that was probably left by the preceding letters, the Moral Mothers did receive some positive mail. Below is a representative piece of correspondence informing the group that their pitch had arrived after election day… 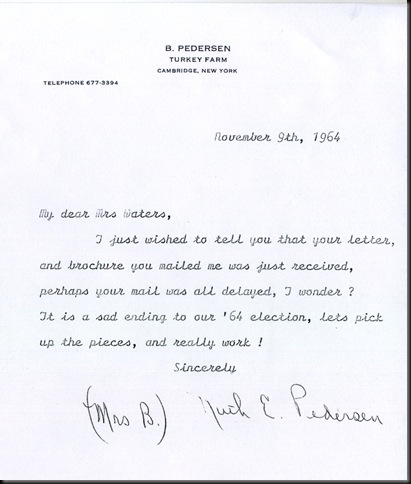 Editor's Note: If this post has piqued your interest in Choice, follow this blog because in the next several months we will be posting a comprehensive history of the film including more information on Moral Mothers for America.

* Carol Jean Arth Waters was born in Emmet, Idaho on August 20, 1922. She attended the University of California, Riverside and San Bernardino City College. From 1953 to 1958 she served as special assistant to Secretary of State John Foster Dulles. She was also special assistant to the public affairs officer at the Department of State. In 1958 and 1959 she was the executive secretary to the U.S. Commission on Civil Rights. In 1960 she was a chairperson for the Nixon/Lodge presidential campaign. In 1962 she married Daniel C. Waters (who died in 1982). Carol Waters died on August 28, 2002 at the age of 80 in Newport, Oregon. The extensive obituary published for Ms. Waters in the Newport, OR News-Times on August 30, 2002 seemingly covered every aspect of her life and career save for her work with Mothers for Moral America.

** Nancy Reagan’s spokesperson, Wren Powell, in a voicemail to Bill Geerhart on May 5, 2008. 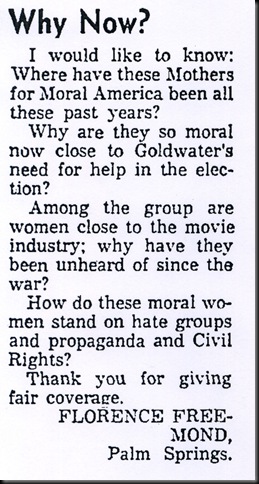 Posted by Bill Geerhart at 3:01 PM

This article is very nice as well as very informative. I have known very important things over here. I want to thank you for this informative read.

I think the admin of this web site is actually working
hard for his web site, since here every stuff iis quality based data. 온라인카지노

Thank you ever so for you blog article.Much thanks again. Really Great.

Very informative blog, This blog is very easy to understand when compared to other blogs.

I have been reading for the past two days about your blogs and topics, still on fetching! Wondering about your words on each line was massively effective. Techno-based information has been fetched in each of your topics

Great idea! it was very helpful article you did! 룰렛

You are my breathing in, I possess few blogs and often run out from to post .바둑이게임

I must say you’ve done a very good job with this. Also, the blog loads extremely quick for me on Chrome. Superb Blog!바카라사이트

I was reading some of your articles on this website and I conceive this web site is very instructive! Retain putting up.바카라사이트

excellent post, very informative. I wonder why the other specialists of this sector don’t notice this.바카라사이트
You must continue your writing. I’m sure, you have a great readers’ base already!

I seriously appreciate your information. This article has really peaked my interest. 코인카지노

infertility for easy Conception. (No more adoption, with Dr Itua your problem will solve and you will have your child with ease.I have been  blog Sites for a while now and today i felt like i should share my story because i was a victim too. I had endometriosis for 18 years and i never thought i would ever get a cure due to the terrible symptoms i had and this made it impossible for me to get pregnant even after 12 years of marriage and it was a serious issue. I got to know about Dr. Itua on Blog Site who treated someone and the person shared a story of how she got a cure and let her contact details, i contacted Dr. Itua and he actually confirmed it and i decided to give a try too and use his herbal medicine that was how my burden ended completely. My son will be 2 this december and also I was suffering from brain cancer which I also explain to Dr Itua so he prepared herbal medicine for me which I drank for two weeks to cure my brian cancer so if you are suffering from any kind of diseases you can contact Dr Itua herbal center to get your cure successfully,  i am grateful to God and thankful to his medicine too.Dr Itua Can As Well Cure The Following Desease…Cancer,Hiv,Herpes,Epilepsy, Hepatitis B,Liver Inflammatory,Diabetes,Fibroid, Lupus, ALS, HPV, Erectile dysfunction, Menstrual Cramp, Get Your Ex Back,  If you have (A just reach his on (drituaherbalcenter@gmail. com Or Whatsapp Number..+2348149277967)He can also advise you on how to handle some marital issues.He's a good man.

Excellent Blog! I would like to thank you for the efforts you have made in writing this post.
카지노사이트

Well I truly enjoyed reading it. This subject offered by you is very helpful and accurate.
토토

Thank you for sharing this information. I read your blog and I can't stop my self to read your full blog. Again Thanks and Best of luck to your next Blog in future.
바카라사이트

Valuable and informative article, such a valuable knowledge. 메이저사이트