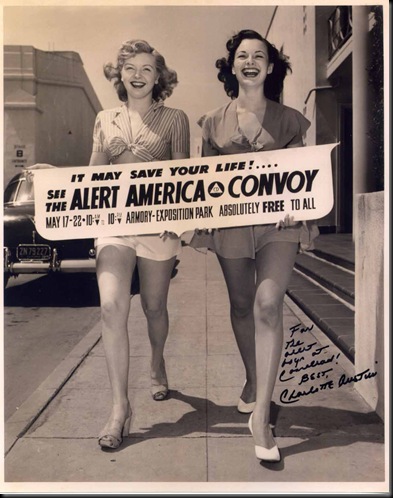 “For the alert boys at CONELRAD! Best Charlotte Austin”

The Alert America civil defense exhibit convoy of 1952 was what Millard Caldwell, Administrator of the Federal Civil Defense Administration (1951-1952), called “Paul Revere on Wheels.” The purpose of the much ballyhooed tour was to demonstrate to Americans the value of preparing for an atomic attack by the Soviet Union and, perhaps more strikingly, the consequences of ignoring such a threat.

The convoy (which was actually three separate convoys on three different routes) found a receptive audience in the nearly forty-eight states that it visited. Over the eight-month tour, an estimated one million visitors turned out in eighty-two cities to view the exhibit.

On May 15, 1952, the exhibit rolled into Los Angeles, California. The lead truck driver, Cpl. Samuel Leible, was greeted in grand style by “Miss Alert America,” Jeanne Lambros and two “hostesses,” one of whom bestowed a Hawaiian lei around his neck. 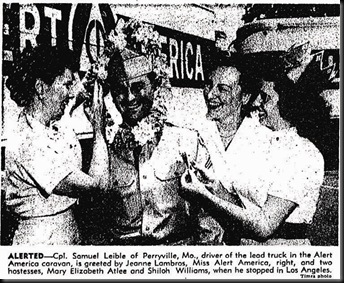 For a show that purported to demonstrate the grim realities of atomic war, its promotion was pure Hollywood. From having starlets Merry Anders and Charlotte Austin pose with an Alert America placard to advertising the show in the movie section of the Los Angeles Times, the P.R. people did not miss a trick. 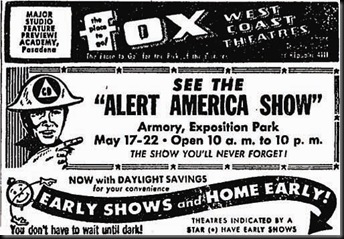 Once inside the exhibit, the public was treated to display after display about survival but with the atomic cheesecake of Ms. Anders and Ms. Austin noticeably absent. It was the old bait and switch re-fitted for the Cold War. 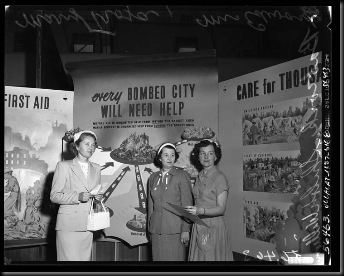 When CONELRAD caught up with Ms. Austin in 2005 she told us that she had no recollection of her civil defense service other than to say that the photo was “obviously taken at the studio.” We thank her for signing the still that is seen at the top of this post. If we ever manage to convince Ms. Anders to autograph the photo, we will “alert” the readers of this blog. Until then, the convoy has left the state. 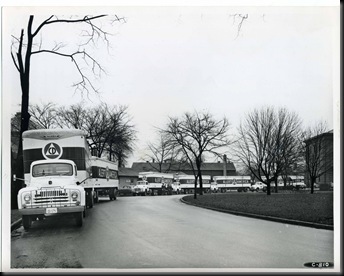 Posted by Bill Geerhart at 9:01 AM

This is a facinating topic -- I'm trying to conduct some research myself on this exhibit/convoy. Could you tell me which sources you used for the photographs as well as the information?

The main photo on the page came with an Alert America official government scrapbook that I won on eBay many years ago.

Hey, thank you a lot for sharing this article with us. I can’t say, how grateful we are to read this. Also, I would love to share it with my friends and family, who are interested. I hope you will publish such articles in the future as well. It’s so helpful. Goodbye! Take a look at this wonderful article and download Clash of Clans Mod APK And https://www.bestessaytips.com/review_essay.php

Nice article, thanks. Let me add that Vigilant America also sought to educate the American public on how to prepare for emergencies and the threat of a nuclear attack. Launched in December 1951, the Alert America program consisted of three convoys with ten thirty-two-foot trailers that traveled 36,000 miles in 82 major cities across the country and attracted 1.1 million people. As part of showcasing products and information to educate people about the emotions and preparedness associated with nuclear weapons, Alert America also featured federally supported films such as Duck and Cover, Atomic Attack Survival and Our cities must fight. " I gathered this information from posts on Instagram in which the authors talk about the civil defense of the United States of the last century. I found a couple of hundred of these videos there and noticed that in most cases they were published by accounts to which about 60 thousand subscribers were subscribed! I am sure that in order to achieve such indicators, the owners of these accounts have resorted to using the services https://soclikes.com/buy-instagram-followers to quickly increase their number.

I really love history and it is the most interesting subject for me at the university. When it was time to choose what subject I want to prepare my summary research work I chose without any hesitation history. Your blog post is the magic wand for me, so nice and useful information and it would cost me hours to spend in the library in order to find everything you post here for free. I write my thesis on my own except for the first chapter which I completely hate and always face troubles with, so I choose to use thesis chapter writing service where I can buy specifically this first part of my thesis work. I have used this service more than 2 times and always receive professionally written work.

Thank you for making my mornings brighter.
바카라사이트