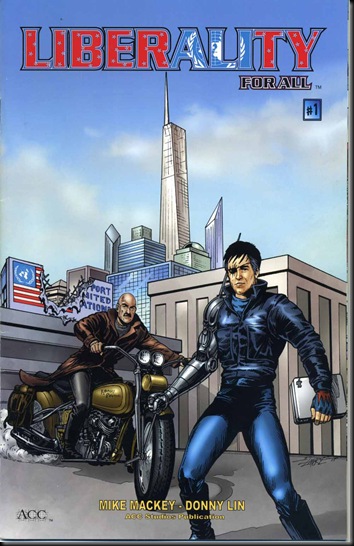 In 1947 the Catechetical Guild Educational Society of St. Paul, Minnesota distributed a Soviet America scare comic entitled Is This Tomorrow: America Under Communism. It was one of earliest comic books to address the Cold War fear that the United States was ripe for enslavement by the Reds.

In 2005 ACC Studios issued the first of an eight part comic book series entitled Liberality for All that presents a dystopian vision of what America might look like twenty years after 9/11…if Al Gore had won the presidency in 2000. This review is included here as an example of the pop cultural similarities between the Cold War and the War on Terror (see also Prayers for the Assassin by Robert Ferrigno).

Liberality for All reads like juvenile fan fiction and, indeed, it would appear that author Mike Mackey has a serious man crush on conservative talk radio host Sean Hannity. Hannity is presented as a ripped, square-jawed hero with an EMP-emitting bionic arm (don’t ask). In this alternate reality version of the future Hannity is now part of F.O.I.L. (the Freedom of Information League) and he and fellow rebel G. Gordon Liddy try to get the conservative word out on pirated airwaves. By the way, Liddy, who would be in his nineties in 2021, looks remarkably spry on his Harley Davidson motorcycle.

As a stand-alone work Liberality for All does not serve the reader very well. There are too many loose strands that are confusing -- such as Hannity’s cybernetically enhanced limb and the guy in the car with the Nader 2000 bumper sticker as seen on page 1. Had we not read this interview with Mr. Mackey, we’d be pretty lost. The guy with the Nader 2000 bumper sticker (who looks nothing like Ralph Nader) is Ralph Nader and he crashes into a Corvair and dies (so Gore can win Florida and thus the presidency…get it?). We’re still trying to understand why Ralph Nader would be listening to Sean Hannity on his car radio and not Pacifica. 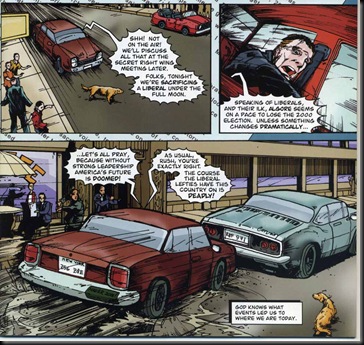 The self-sabotaged Corvair reference is probably the most subtle joke Mr. Mackey makes in Liberality for All. Everything else has the measured wit and restraint of David Zucker’s An American Carol:

The National Rifle Association (NRA) has been “officially disbanded.”

Chelsea Clinton and Michael Moore are President and Vice-President, respectively.

America has joined the United Nation’s “world government” and the flag is altered to include the U.N.’s logo.

The capture of Michelle Malkin is reported.

Matt Drudge is number one on the FBI’s most wanted list.

Osama bin Laden is a dignified ambassador from Afghanistan who conspires with Saddam Hussein to bring a suitcase nuke into the United States.

The Freedom Tower (the building that will be built where the Twin Towers once stood) is now known as the Unity Tower. 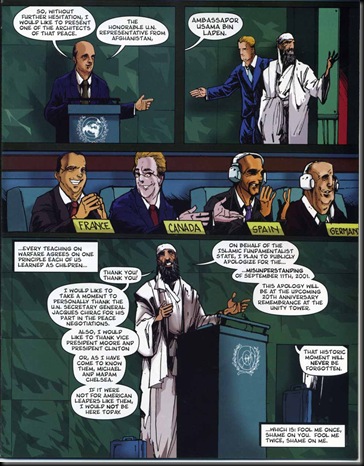 Mr. Mackey leaves what is perhaps his funniest "future shock" of the series for issue number 2. In this edition, previewed here, we learn that a sinister-looking Alan Colmes is America’s most popular news personality. However, not even this makes much sense since Mr. Colmes is about as credible a liberal powerhouse as the other left wing straw men on FOX News. But perhaps now he has a bionic spine?

Liberality for All is clearly a labor of love by a writer who has been thoroughly Hannitized and has drunk all of the conservative Kool-Aid and then some. How else could someone think (in 2005, no less)—even in the realm of satire—that a Gore presidency would have been the root of all future evil? Would President Gore have taken long summer vacations ignoring Presidential Daily Briefs warning that Osama bin Laden was determined to strike in the United States? Speculative history is a two-way street, Mr. Mackey.

But this comic book’s major flaw is in its over-the-top and mostly unfunny attempts at comedy. Conservatives, for whatever reason, have a difficult time producing quality humor and Liberality for All joins the aforementioned An American Carol, FOX News’s short-lived 1/2 Hour News Hour and the collected works of Paul Shanklin in the right-wing comedic junk heap.

As a love letter to Sean Hannity and as an example of the paranoid pop culture excesses of the War on Terror, however, Liberality for All works just fine. 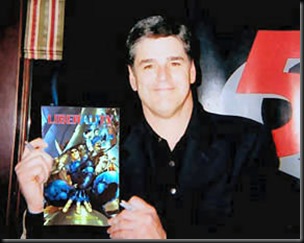 Well done! I can’t express how much I appreciate your efforts. It’s great to have someone as special as you to work with!

Give the world the best you have, and the best will come to you! I want you to know that I really appreciate your efforts.

Massage is very important for relaxing.

Massage is very important for relaxing.