SURVIVAL VÉRITÉ: A Fallout Shelter Test with a Twist

“Let me in! Let me in! I’m dying! God-damned Communists!” 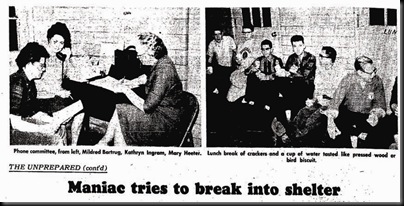 Over the years CONELRAD has read numerous newspaper and magazine accounts of the public fallout shelter tests that seemed to be in vogue in the early 1960s. Most of these “experiments” were carried out by local civil defense authorities as a means to boost public awareness about Cold War survival. Of course, because these tests lacked the essential element of genuine panic that would accompany a nuclear war, they were predictable affairs with predictably boring media coverage.

But in the summer of 1965, the Pleasants County (West Virginia) Civil Defense Council tried something a little different. Doug Taylor and Arthur Boggs, the men who organized what could have been just another routine shelter occupancy exercise, decided to throw some post-attack realism into the mix. Fortunately for history, writer Helen Parr Fleming (1916-2000) was around to witness the strangeness that ensued. Her remarkable first-person narrative, “The Unprepared,” was published in the September 26, 1965 edition of the Charleston, West Virginia Sunday Gazette-Mail newspaper.[1] 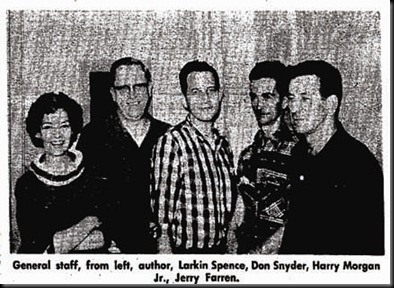 Ms. Fleming (pictured above) begins her story by recounting how she was invited to participate in the shelter study via mail (69 other county residents also answered the call to service) and what happened next:


Several days after I accepted, I received further instructions. “Arrive at the St. Mary’s Graded School – which was to be our fallout shelter – between 7:20 and 7:45 a.m. with or without breakfast. Wear old clothes. No radios. Bring a musical instrument if I played one, books, magazines or playing cards.” The instructions ended there.

With a sense of adventure and visions of sweet rolls and coffee at the shelter flitting through my mind, I dressed in slim-jims and a woolen sweater and packed my purse.
Chlorophyll chewing gum – a tooth brush would be sissy – playing cards, new shorthand pad, eight of the dullest pencils in town, three copies of the New Yorker, Polaroid camera, headache pills, lipstick, comb and nose tissues.

Looking more like a war correspondent than a civilian, I reported to St. Mary’s Graded School – and was plunged into one of the most chaotic days of my life. As events permitted, I took minute-by-minute notes with my dull little pencils, completely filling my shorthand pad from front to back and back to front again.

The realism referenced above comes first in the dire loud speaker notifications (“Your attention, please! Missile attack will be in the next 30 minutes. Do not attempt to leave your shelter!) and later in the form of a wounded shelter-ite. Fleming, distracted from her bridge game, describes the sight:


They are carrying someone in. He is supposed to be a casualty. Ugh! There is blood all over his leg. Do they have to make it so real? They have laid him on the floor and are trying to give him first aid. Apparently, we don’t have much by way of first aid supplies. The “casualty” is screaming and I have a strange feeling in my stomach. Someone says his name is John Walton. Don Snyder is checking him for radiation with a Geiger counter. I feel so useless.”

The ultimate example of survival vérité occurs later still as Fleming is describing the bureaucratic necessities of shelter management:


…We need a deputy for operations. Don [Snyder] starts to read off the duties, but there is a commotion at the door. The guard is grapping with someone. A hand and leg appears. The hand is bloody. A man is screaming:
“Let me in! Let me in! I’m dying! God-damned Communists!”
One of the men runs to help the guard. They get the hand and leg out and close the door and lean against it. There is dead silence. We are all stunned. This maniac has all of us shook up. I’m sure the same questions that are running through my mind are bothering everyone.

What if he couldn’t get to a shelter sooner? Did we treat him right? I couldn’t see his face, but those on the other side could. They say he was with radiation burns and blood was streaming from his mouth. He was grimy dirty and carrying a hatchet. The weapon was the first thing the guard saw after he had caught sight of the horribly burned face.

I feel better about the guard’s actions now. It was an evil, un-Christian decision, but there wasn’t anything else he could do. We couldn’t let a maniac in among us.

There is still silence in the shelter. Where did the man go? Had he fainted from his own hysteria, or was he dashing on to the next shelter to demand his way in? I feel like I am going to cry.

Don starts a discussion on the problem. We decide if it happens again, we will let him in and check him for radiation. I he’s too “hot,” we’ll isolate him. There are enough of us to wrest the hatchet away and throw it back outside. 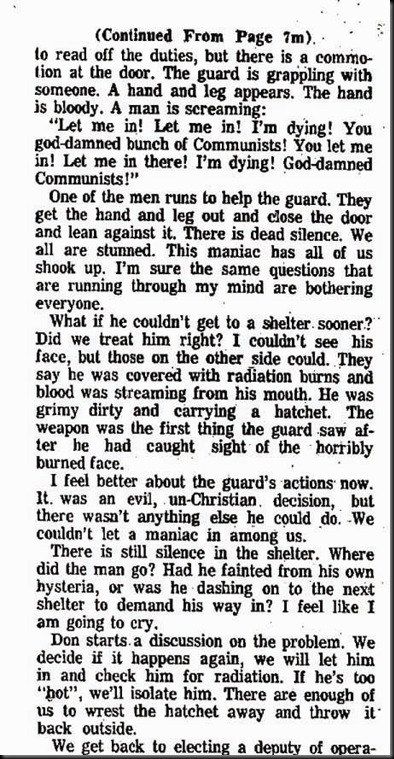 The simulated ordeal of the fallout shelter residency ends for Fleming and her fellow shelterees at 6:45 p.m. with another loud speaker communication:

Oddly, the test organizers chose to conclude the day’s events by showing the participants a civil defense movie donated by West Virginia Senator Jennings Randolph (1902-1998) that dramatizes life in a shelter. In the film, Public Shelter Living: The Story of Shelter 104, however, there is no hatchet-wielding intruder – just a jive-spouting, pessimistic beatnik. 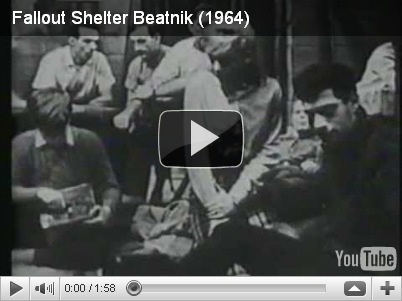 You can view Public Shelter Living: The Story of Shelter 104 in its entirety here.

[1] Helen Parr Fleming, “The Unprepared,” the State Magazine section of the Sunday Gazette-Mail, pp.6m-8m.
Posted by Bill Geerhart at 12:22 PM

an excellent account of what shelter life would of been like,the inner conflict over leaving someone outside while a screaming bloody casulty was accepted sans a weapon,i think the real sickening part would of been the announcement "we won we won'not for the victims left outside..

Hey everybody! What type of music do you like? What about me, I like rock music, but my good friend like to listen metalcore and I am going to write an article about the impact of metal music on the human psyche by using this fantastic online writing service. So, friends, if you are interested, just follow https://www.paramountessays.com webpage.