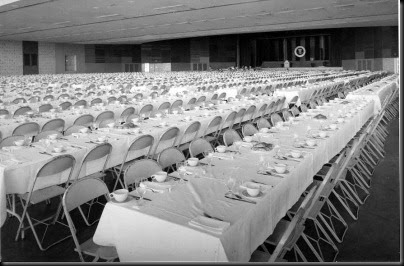 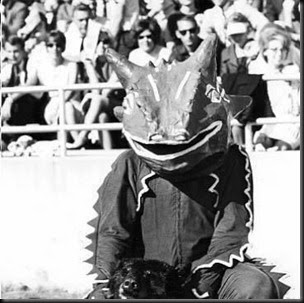 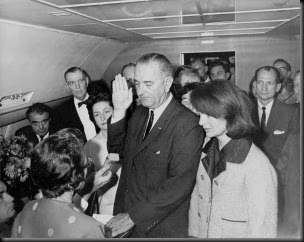 Posted by Bill Geerhart at 6:50 AM

Nice article-- but keep in mind that LBJ likely would not have committed to paper such a damning remark about Dallas. He likely intended it as a verbal "spontaneous" moment-- as politicians often do, especially when they use humor in their speeches.

The fact that this joke at Dallas's expense is not typed into the speech doesn't mean that it wasn't intended to be delivered.

There is of course no way to prove the line's existence without it being committed to paper, other than accepting at face value the recollections of someone like Stanley Marcus, who was very close to LBJ and presumably (and hopefully) basing his memoir on something akin to reality.

The fact that a comment about two-headed Martians is not typed into the speech doesn't mean that one wasn't intended to be delivered, either.

Marcus didn't even recall (or apparently research) the date of the fundraiser correctly. Why would we then base an assumption of credibility on his *decade-later* claim that something not in existence, for which there is no evidence, should be assumed to be real? This anecdote, we're to believe, went underground for 12 years--despite the national obsession with the assassination--only to resurface in this guy's memoir as a report of what was "reportedly" said? He's not even saying he himself heard it. C'mon.

This story smacks of the famous "What I tell you three times is true," which is germane when hunting snark. Perhaps the most famous retrospective creation is the malarkey about "Ring Around the Rosie" and the plague. Proving non-existence is tough or impossible, but in fact the onus is on those who would claim something *does* exist to show as much.

It's a high-quality piece of work, and I'm impressed. It was an interesting post you wrote! I hope it works soon! I have written a post on my site about the issue with the Built-in webcam not working on my MSI laptop if you have any questions. You can find our article here. We have an article here.

Most bank accounts in Qatar require an initial financial charge to secure the opening of accounts. This value varies from bank to bank and is also dependent on fluctuating rates of currency exchange. An international financial expert will help guide these changes as well as the minimum fees and costs of maintaining a bank account. Make sure you understand the interest rates and growth rates associated with any international bank account so that you can maximize your earnings while minimizing risk. http://www.confiduss.com/en/jurisdictions/qatar/business/bank-account-opening/

Thanks for sharing this best stuff with us! Keep sharing! I am new in the blog writing. All types of blogs and posts are not helpful for the readers. Here the author is giving good thoughts and suggestions to each and every reader through this article. Quality of the content is the management assignment uk main element of the blog and this is the way of writing and presenting.

hire a wordpress developer helped me to award achievement on desired actions.

The very next time I read a blog, I hope that it won’t fail me as much as this particular one. I mean, Yes, it was my choice to read through, however I genuinely believed you would have something helpful to say. dissertation help uk All I hear is a bunch of complaining about something that you could fix if you weren’t too busy searching for attention.

This is a really decent site post. Not very numerous individuals would really, the way you simply did. I am truly inspired that there is such a great amount of data about this subject have been revealed and you've put forth help with assignment writing a valiant effort with so much class. On the off chance that needed to know more about green smoke surveys, than by all methods come in and check our stuff.

Stunning site! Do you have any accommodating clues for trying essayists? I’m wanting to begin my own site soon yet I’m somewhat lost on everything. Would you prompt beginning with a free help with assignment writing stage like or go for a paid alternative? There are such a large number of alternatives out there that I’m totally overpowered .. Any thoughts? Welcome it!

Find and get cheap taxis in Purley for your travel needs with Expressminicab,
We offer the lowest price and reliable airport transfer service to all London airports. Get instant quotes.
Our business operates 24/7, no need to worry about finding taxi

Peatix is a global event registration platform that provides event organizers with powerful tools to create, promote, manage and sell out events of all sizes. Peatix's innovative, mobile-centric solution for event management has served over 30,000 events since its inception in may.
Spacebar counter

Very informative article. I would like to share with you a new article which is about morse code is made up of a sequence of dots and dashes. The letter “A” is represented as a single dot and the “T” as a single dash. Visit here and learn more.