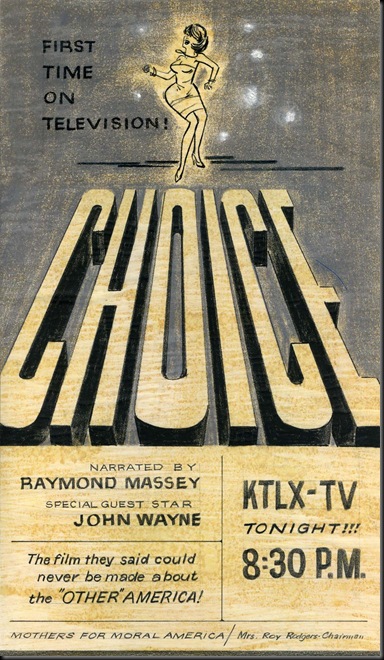 On April 8, 2008, Raymond R. Morgan, Jr., the executive producer of the 1964 Barry Goldwater campaign film, Choice, granted an exclusive interview to CONELRAD about the movie at his home in Southern California.

After our lengthy discussion of all-things-Choice wound down, Morgan unexpectedly gave us his professionally bound scrapbook in which he kept press clippings and other ephemera related to the controversial film (the image seen above is a mock-up of a newspaper advertisement that appears on the first page of the scrapbook). What was even more surprising to us was that the retired television producer and advertising executive (and orange farmer) did not want his extraordinary keepsake from the ‘64 campaign returned. 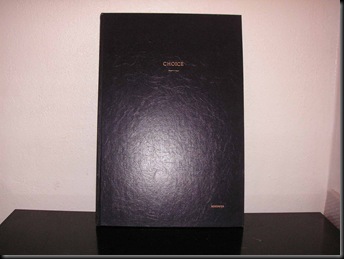 CONELRAD humbly accepted the gift and then spent the following three days photographing and scanning its amazing contents. After we had completed our thorough review of the book, we decided that other scholars deserved the opportunity to see the physical artifact.

Because the Ashland University Archives in Ashland, Ohio had been so helpful to CONELRAD in its initial Choice research, we decided to donate the scrapbook to their John M. Ashbrook Collection of Papers (which contains some of the papers of the architect of Goldwater’s 1964 Republican nomination victory, F. Clifton White). Our donation, which Mr. Morgan approved of in advance, was received by archivist David Roepke on December 12, 2008. Students, visiting researchers and the general public can now view a unique piece of history at this university.

But why should people in Ohio have all the fun? Following the vintage photo below of Morgan (at right with a martini), are highlights from his scrapbook. 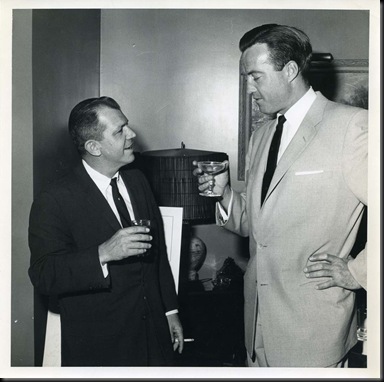 If ever there was a headline that captured the upside-down political strategy of Choice, this is it. From the October 21, 1964 edition of the New York Daily News. 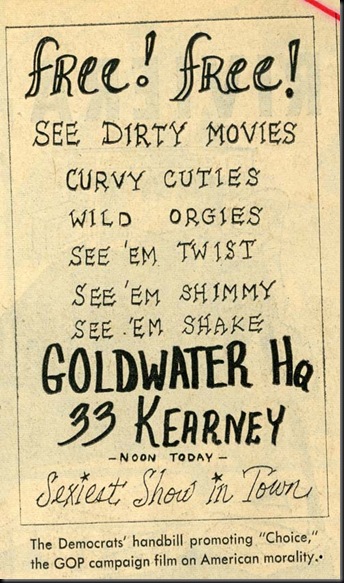 The above flier was handed out by fun-loving Democrats during the brief period that Choice was being shown at Barry Goldwater’s San Francisco campaign office (as seen below). The handbill was published as part of an article entitled “Barry Kills Film – S.F. Shows It,” San Francisco Examiner, October 22, 1964. 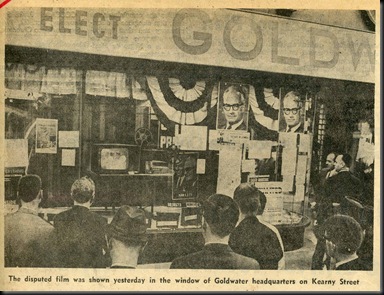 Looky-loos catch a glimpse of the controversial Choice outside the Goldwater campaign office on Kearny Street in San Francisco. The photograph was published as part of an article entitled “Barry Kills Film – S.F. Shows It,” San Francisco Examiner, October 22, 1964. 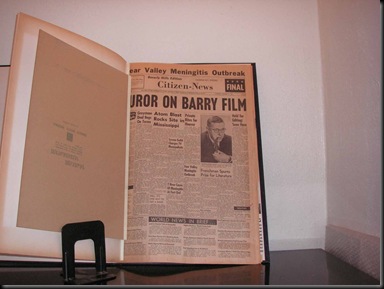 As hard as it is to believe today, the controversy over Choice vastly eclipsed the coverage of LBJ’s Daisy ad. The headline seen above is from the October 21, 1964 edition of the Beverly Hills Citizen-News.

“FILM ON MORALITY HELD UP BY BARRY” 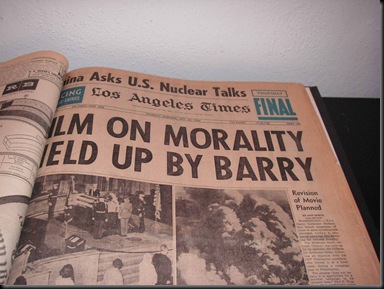 Headline of October 22, 1964 edition of the Los Angeles Times. 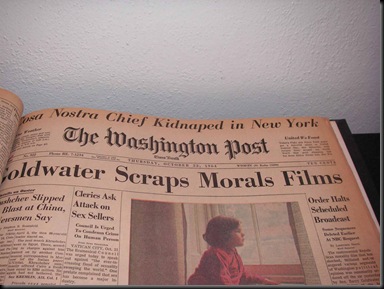 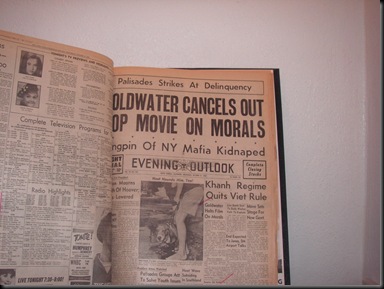 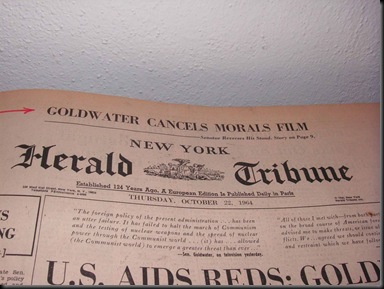 Headline from the October 22, 1964 edition of the New York Herald Tribune. 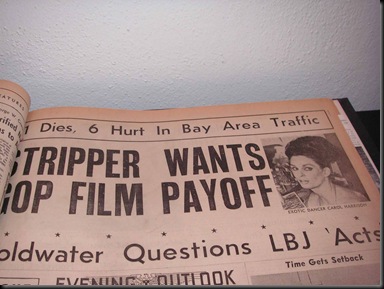 Exotic dancer and actress Carol Harrison (aka Caroll Harrison, aka Exotica) added to the Choice hoopla by threatening to sue the Republican National Committee. She was angry that the Choice filmmakers used stock footage of her without her permission and without paying her. CONELRAD will be posting a separate article about Ms. Harrison in the near future. The above headline is from the October 24, 1964 edition of the Evening Outlook (Santa Monica, California).

Another article about Carol Harrison (see above description).  From the October 24, 1964 edition of the Glendale (California) News-Press. 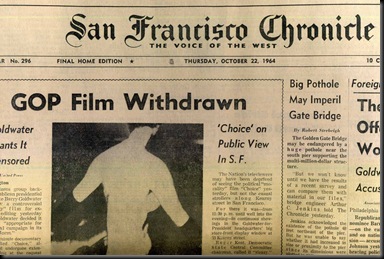 The San Francisco Chronicle published an image from one of Choice’s most talked about scenes (Carol Harrison modeling a topless bathing suit) on its front page on October 22, 1964. 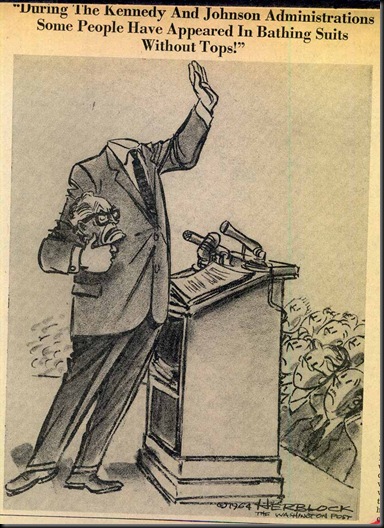 This Herblock editorial cartoon pokes fun at the topless bathing suit controversy from Choice. From the October 22, 1964 edition of the Washington Post. 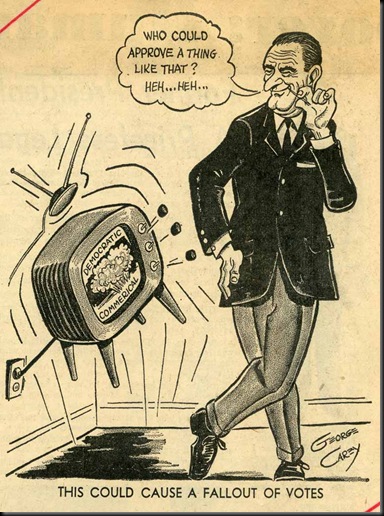 One of the few (perhaps the only) contemporaneous comparisons of the Daisy ad and Choice controversies. This editorial cartoon by George Carey is from the October 20, 1964 edition of the Valley Times (Los Angeles). Carey expected the paper’s readers to draw the linkage between the early September blow-up over the Daisy spot with the current outrage over Choice. 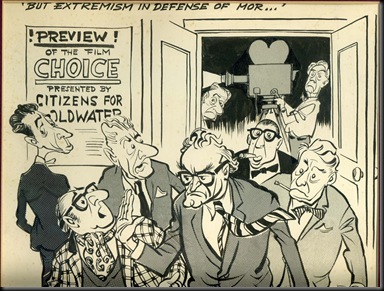 We thought we’d conclude our electronic scrapbook with this priceless cartoon by Ed Valtman of the Hartford (CT) Courant. It sums up Goldwater’s frustration with the controversy over the film that he himself approved production of. And in a wonderfully obscure reference, Valtman lampoons Citizens for Goldwater PR director, Rus Walton (the forlorn looking character to the left, next to the Choice poster), who was the driving force behind the movie. The die-hard political nerds who caught this gag no doubt laughed themselves silly. Yep, we count ourselves in that crowd…

Posted by Bill Geerhart at 8:06 PM

I have just downloaded iStripper, and now I enjoy having the best virtual strippers on my taskbar.