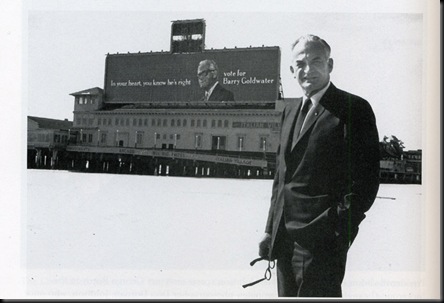 It began as a master stroke of in-your-face campaigning: The Republicans rented space on Atlantic City’s largest billboard just in time for the nomination of incumbent President Lyndon Baines Johnson at the 1964 Democratic National Convention. As a result of the GOP brainstorm, thousands of devoted Democrats were welcomed to town by the stern visage of LBJ’s opponent, Republican nominee Senator Barry M. Goldwater, and his slogan: “In your heart, you know he’s right.” At some point, Goldwater himself slipped into enemy territory for the photo op seen above. 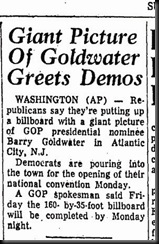 The billboard and news coverage of the clever coup was the one PR hiccup in an otherwise smooth coronation of Johnson. But a small group of LBJ supporters weren’t about to let the Republicans have the last word. On the morning of Monday, August 26, 1964, the sign’s tag line was given a creative postscript: “Yes---extreme right.” 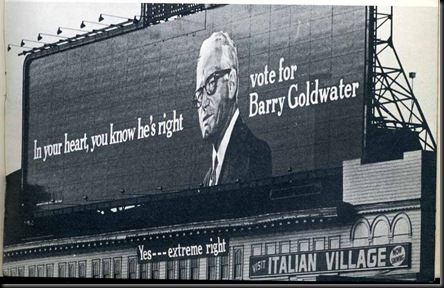 According to a New York Times account of the prank, the idea for the partisan rejoinder came from a cadre of influential Democrats: Robert Benjamin, a New York delegate and chairman of the board of the United Artists film studio; Newton Minow, the former head of the Federal Communications Commission; Robert Tish, president of the Loew’s hotel chain, and Minow’s brother-in-law, Stanley Frankel, vice president of the Ogden Corporation, a public utility holding company. 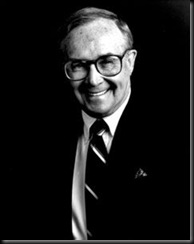 Originally, the group conspired to get an adventurous teenager to climb the structure and paint in a caret and add the word “far” between the words “he’s” and “right.” But cooler heads prevailed and the men negotiated with the owners of the pier hosting the billboard to accomplish their goal in a more legal manner. The proto-tagging was then quickly executed by a local (and presumably Democratic) painter.

Mr. Frankel’s final quote on the matter for the Times was a twist on another famous Goldwater phrase: “We feel that extremism in pursuit of a sign is no vice.”

The impact of the prank was short-lived, but the episode does help explain why Mr. Minow agreed to his famous cameo in Woody Allen’s 1977 film, Annie Hall—the man clearly has a sense of humor.

BlueHost is one of the best web-hosting company for any hosting services you might need.