After the first Fallout Shelter Sign was posted on the Westchester County Building in White Plains, New York on October 4, 1961, it was just a matter of time before people started using the sign for their own political purposes. In this regard, the sign proved to be irresistible to politicians and protesters alike. To see examples of some of the pro-civil defense officials who exploited the sign for potential votes see the CONELRAD Fallout Shelter Sign Marking Gallery on Facebook. For examples of some of the anti-civil defense protests, keep reading… 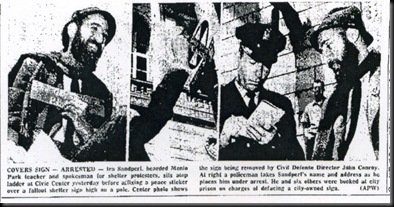 San Francisco – Sunday was another protest day at San Francisco City Hall. Seven people were arrested but it was all very orderly.

Ira Sanperl, of nearby Menlo Park, spokesman for the shelter protesters, had conferred in advance with police and Civil Defense Director John Conroy. An arrest procedure was agreed upon.

A protester would ascend a stepladder to a fallout shelter sign, paste his sign on the shelter sign and climb down. Conroy would then climb the ladder, remove the sticker and deliver it to a policeman who would arrest the protester.

A few days after the San Francisco protest, Harvard University students objected to the sign with bon mots worthy of Thurston Howell III:

“…What do you do about townies if there is an attack? How do you block the doors?” 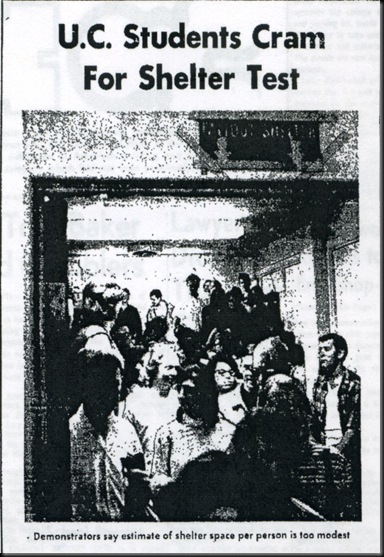 Somewhat earlier, in April of 1963, the Berkeley, California-based organization Campus Women for Peace went the more traditional route and placed a referendum on the spring ballot of the Associated Students of the University of California (ASUC) elections to have campus Fallout Shelter Signs removed. An editorial published on April 17, 1963 by Sandie North in the Berkeley student newspaper, the Daily Californian, advocated for students to vote for the removal of the signs. On April 23, 1963 the vote was 2,196 to 1,296 in favor of removing the signs, but the university administration ignored the vote and by July 5, 1963 the campus shelters were being stocked with supplies.[ii] It was time to get more creative.

Forming the ad hoc group “Committee on Fallout Shelter Information,” Women for Peace, on February 26, 1964, staged a Fallout Shelter “pack-in” to demonstrate that “shelters provided no shelter at all” and “the university was lending its name and prestige to a dangerous hoax.”[iii] The Oakland Tribune reported the following account of the event beginning on the front page of its February 27, 1964 edition:

Berkeley—Some University of California students are at odds with civil defense officials.

They played the old sardine game yesterday to show the estimate of fallout shelter space, per person, were far too modest.

Members of a hastily organized “Committee on Civil Defense Information” crammed some 150 students into a fairly small room for almost 45 minutes on a lower floor in Dwinelle Hall on the campus.

The room measures approximately 12 by 24 feet and is 10 feet high.

No one fainted, but when the doors were finally opened, the red faced, panting students came out hoarsely singing an appropriate folk ballad, which contains the phrase, “when will they ever learn?”

Art Goldberg, a student who helped organize the demonstration, said the civil defense people had decreed that each of the rooms designated as fallout shelters on the campus would have room for one person for every 10 cubic feet.

The room in question by that standard should have had space for 250 students.

“All this shows that we should spend money to do away with slums instead of worrying about fallout shelters,” said Goldberg, who is also chairman of Slate, a left wing off-campus organization.

Goldberg promptly tore down a sign which said “Better Some Than None,” after it was posted by a student onlooker, John Beckjord.

Berkeley Fire Chief Chester Moller, who is in charge of civil defense coordination for this area, noted that 90 per cent of the city’s fallout shelters are on the campus.

Vice Chancellor O.W. Campbell said there is no definite measurement for how many persons to a room. He dismissed the demonstration as “just a student propaganda stunt.” 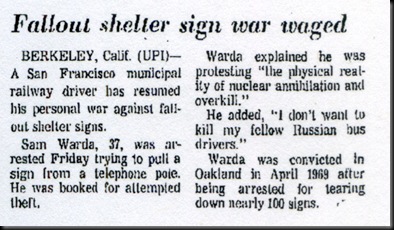 On December 1, 1969 San Francisco municipal bus driver Samuel Saul Warda was arrested for taking down a Fallout Shelter Sign at 17th Street and Broadway in Oakland, California (he also had 30 additional signs in his pickup truck). Warda, who was 35-years-old at the time of his trial on petty theft and malicious mischief charges, was a former Modesto elementary school teacher and a member of the anti-nuclear group American Society to Defend Children. Warda told the media during his trial that he had removed approximately 200 Fallout Shelter Signs in the Bay Area and had mailed them to civic leaders, newspapers, television stations, and college physics, chemistry and anthropology departments with attached letters of protest. He told the Oakland Tribune that he believed the shelter program to be “a waste…shot full of lies.”

Unfortunately, Warda’s attorney, Phillip B. Ziegler, was prevented from putting Manhattan Project physicist and Nobel Peace Prize winner Dr. Owen Chamberlain on the stand to testify on behalf of his client. Had Chamberlain been allowed to speak, he told the Oakland Tribune that he would have told the jury that “Shelters are a fraud. There are no shelters.”

Ziegler was, however, able to elicit from Lloyd Scott, an Oakland police lieutenant and chief deputy director of Oakland Civil Defense, that Scott did not know who owned the city’s Fallout Shelter Signs—the city or the U.S. Corps of Engineers.[iv] In the end, it did not matter, because Warda was found guilty on April 3, 1969 and sentenced to a 60-day suspended jail sentence and a fine of $300.[v]

Moments after Warda’s sentence was handed down on April 24, 1969, 87-year-old peace activist Beatrice Whitnah used one of her crutches to remove a Fallout Shelter Sign from the Oakland Hall of Justice and then entered the courtroom of the judge who sentenced her Fallout Shelter Sign protesting brother in arms. Whitnah told the UPI wire service that “He (Judge Myron A. Martin) talked to me, very nice and cordial, but he wouldn’t take my sign. I went home and wrote him a letter to say my protests must continue.”[vi]

Whitnah’s perpetual reign of defiance included a successful effort to de-post every Fallout Shelter Sign in Berkeley, California—it helped that she paid freelancers $3.00 for each removed sign (she arranged the stolen signs in the shape of a peace sign on her lawn). Whitnah did not stop at Fallout Shelter Signs – she also loved to set off civil defense air raid sirens in the early morning hours (she allegedly paid a young accomplice for this activity). She told a journalist in 1971 that she “wrote out a full confession” to the authorities concerning the siren pranks, but “they refused to put me in jail.”[vii]

Warda’s protests continued, too, but unlike an octogenarian Gold Star mother (Whitnah lost a son in World War II), he was more prone to arrest. In 1971 he was collared for trying to pull down another Fallout Shelter Sign. He explained to the Hayward, California Daily Record newspaper that he was protesting “the physical reality of nuclear annihilation and overkill” and added that “I don’t want to kill my fellow Russian bus drivers.”[viii]

Beatrice Whitnah died August 19, 1973 at the age of 92 and Samuel Saul Warda died February 7, 2009 at the age of 74. They are both survived by numerous rusty Fallout Shelter Signs.[ix]

Posted by Bill Geerhart at 1:08 PM

Wow, waht an interesting post I have found here! Dear author, thank you very much for it! I hope that I will be able to read more detailed information from you and hope to share with you my own web articles as well. You can just view website here.

The spacebar counter speed purely depends on your finger’s agility, which you can achieve with tons of consistent practice from scratch. Furthermore, hold down the space bar key with two or more fingers and try to generate a burst of spacebar hits through your whole hand instead of using just finger muscles.
Spacebar counter

The patreon is completely safe. It can be difficult to trust such a new concept, but Patreon has allowed thousands of artists to make a career and a living off of what they do best. For a subscriber, Patreon is perfectly safe to use.
space bar test

Our experts are very qualified and highly experienced dedicated academicians renowned for their command over the subject. Despite being the best quality service provider out there, our Commercial Law Assignment Help is always cheap and affordable.