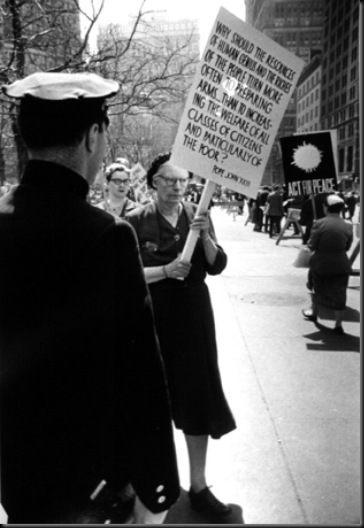 On April 17, 1959 the indefatigable Dorothy Day once again defied the annual civil defense drill in New York City known as Operation Alert. She had been protesting the nationwide test every year since 1955. And, as she had been in previous years, the pacifist and co-founder of the Catholic Worker movement was promptly arrested and charged.[1] 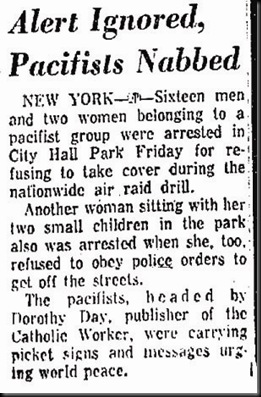 A week later, on April 24th, the 61-year-old Day and five of her fellow partners in crime elected to serve ten-day prison sentences rather than pay fines. Their lawyer explained the reasoning behind the decision in plain English:

At some point around the time of her initial arrest, Ms. Day had written a letter to the former first lady, Eleanor Roosevelt, concerning, apparently, Operation Alert. The exact content of the missive is not known, but on April 21, 1959 Mrs. Roosevelt replied.[3] The obtuse, schoolmarmish tone of the letter is shocking considering Roosevelt’s standing as the matriarch of liberalism. But, then again, she was a noted booster of civil defense during World War II (and after):

I have your letter but I must say I am as a loss to know why you are opposed to cooperating with the compulsory air raid drill. Such measures are, after all, meant for your own safety, so I cannot see why you go to such extremes to avoid complying with the rules. 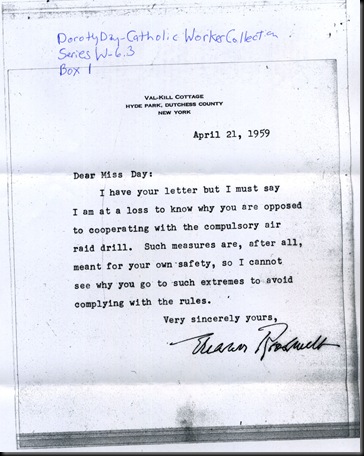 Ironically, two years before this chilly correspondence, Day had witnessed the tail-end of an appearance by Mrs. Roosevelt at the New York Women’s House of Detention in New York City. At the time, Dorothy was serving a thirty-day sentence for protesting the 1957 civil defense drill. Judith Malina, Day’s fellow activist and cellmate for that particular incarceration, recalls in her published diaries how poorly received a speaker the former first lady was:

Not too many girls attended the lecture. It seems she comes often and is not popular. In order to fill the chapel all those who go to hear Mrs. Roosevelt are given a portion of ice cream and may stay up an extra half hour after lights out.[4]

Malina and Day did not get to see Roosevelt’s full speech, but were present for the question and answer period. Based on Malina’s journal assessment, it is easy to understand why the inmates had to be bribed to attend:

Mrs. Roosevelt answered elegantly, patiently, indisputably. She answers as she does in her magazine column, with an icy warmth, hewing the liberal bourgeois rut with undeniable precision and an unfading smile.[5] 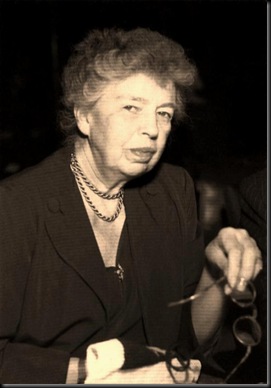 [1] The 1959 arrest was the fifth and last time Day was arrested for protesting the civil defense drills. 1961 was the last year Operation Alert was held. See “Civil Defense Drill Protests: Dorothy Day and Friends Sit In for Peace” on the Marquette University web page for more details.

[2] “5 Pacifists Jailed in N.Y.,” Associated Press via the Racine (Wisconsin) Journal-Times, April 24, 1959. The other persons who chose jail over a $25 fine were Ammon Hennacy, Deane Mowrer, Arthur J. Harvey and Karl Meyer.

[3] The Eleanor Roosevelt letter resides in the Marquette University Dorothy Day Catholic Worker Collection, Series W-6.3, Box 1. CONELRAD has not yet been able to locate the originating letter to Mrs. Roosevelt. If an when we are to find it, we will update this post.

Posted by Bill Geerhart at 9:41 AM

This hardly seemed "snippy" to me it merely expressed a puzzlement over Ms. Day's position.

Journal-Times, April 24, 1959. one other people who chose jail more than a $25 good have been Ammon Hennacy
How can we get the best runescape gold,through the internet or the players in the game? Can we Buy WOW Gold with cheap price or other ways else?

Did they really have to arrest her? Just wondering...

Shows what a phony statist bitch Eleanor was as she was wrong on everything.

They should neither have paid the fines nor served the terms. They should have just told the state (a man-made organization, nothing more) to go fuck itself.

I am so thankful for what you did.
바카라사이트

Good Post! Thank you so much for sharing this pretty post, it was so good to read and useful to improve my knowledge as updated one, keep blogging.