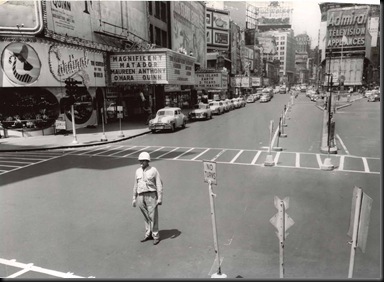 Judge Louis Kaplan: Have you ever been committed to a mental institution?
Judith Malina, Operation Alert Protester: No, have you?

One of the curious rituals of the early Cold War was the annual nationwide civil defense drill known as Operation Alert. Beginning in 1954 and continuing through 1961, these evacuation extravaganzas played out in newspaper headlines and newsreels like scenes from a bad science fiction movie. The official purpose of Operation Alert was to test the country’s civil defense readiness, but its execution—with mock “attack” headlines, vacated city centers and presidential proclamations from undisclosed locations—was more theatrical than educational. 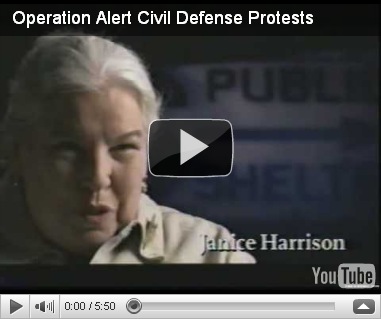 The first Operation Alert took place on June 14, 1954 without incident. The New York Times reported “no major instances of recalcitrance” and that “New Yorkers…went loyally to the shelters at 10 A.M. [when the air raid sirens warning of the fictional atomic bombers went off] but didn’t really understand what was happening.” 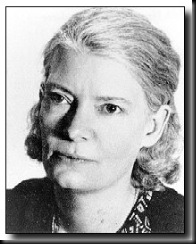 Dorothy Day, 1897-1980
On June 15th of the following year, however, there was “recalcitrance.” Dorothy Day, co-founder of the Catholic Worker movement and a couple of dozen other kindred spirits, protested Operation Alert in City Hall Park in lower Manhattan. Before the sirens sounded at 2:00 P.M., the pacifists made their case to the news media that the civil defense exercise was a dangerous charade. Some of the protesters, including Ms. Day, handed out leaflets that read:


We will not obey this order to pretend, to evacuate, to hide. In view of the certain knowledge the administration of this country has that there is no defense in atomic warfare, we know this drill to be a military act in a cold war to instill fear, to prepare the collective mind for war. We refuse to cooperate. 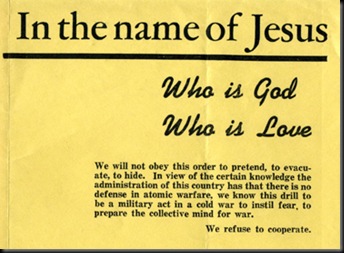 Twenty-nine people were arrested that day under a state law that, as the New York Times explained, made “non-compliance with civil defense orders in such exercises a misdemeanor, punishable by up to a year in prison, $500 fine or both.” Most of those who were loaded into the police wagon were affiliated with the Catholic Worker, the War Resisters League (WRL) or the Quakers. One unfortunate arrestee, Rocco Parilli, a “bootblack,” was hauled in because he was unaware of the planned civil defense drill and had ignored the police when he was ordered to take shelter. 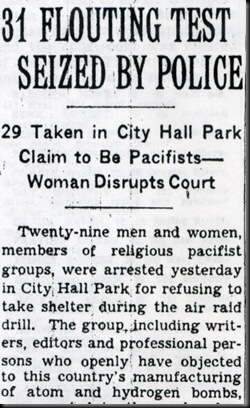 After processing at the Fifth Precinct, the protesters were taken to the Tombs and put in a communal cell where they awaited their turn before Judge Louis Kaplan in night court. Kaplan, by all accounts, was in a foul mood when the group was brought into his courtroom. As the bailiff was reading the names of the defendants, actress and co-founder of the Living Theater, Judith Malina, laughed when she heard the name of her fellow protester, Ammon Hennacy, mispronounced as “Ay-mun Hanackee.” 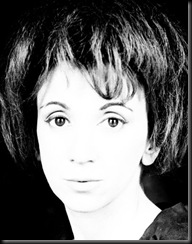 The judge angrily admonished her for disrupting the decorum of his court and then, after a testy back-and-forth regarding where Malina lived, he asked if she had ever been “committed to a mental institution.” The actress shot back, “No, have you?” Kaplan thundered: “That’s enough! You are hereby committed to Bellevue for psychiatric evaluation.”
As the aghast spectators reacted to the ruling, Malina’s husband, Julian Beck (who was in the courtroom with a bail bondsman hoping to free his wife so that she could appear in a scheduled performance at their theater that evening), screamed out “She’s a wonderful woman!” When two police officers came to take the actress away, she jumped on a bench and then to a table in a futile effort to escape them. But they quickly captured the panicked Malina and carried her above their heads out of the crowded courtroom. At this point Judge Kaplan ordered everyone but the press and the defendants cleared from his court. He then set the protesters’ bail at a ridiculously high $1,500 and read an absurd prepared statement likening them to murderers: “These people, by their conduct and behavior, contributed to the utter destruction of the three million theoretically killed in our city.”
After a couple of days, with the help of her husband and an attorney, Malina was released from custody. She wrote extensively about her whirlwind experience in the criminal justice system in the June 20, 1955 entry of her personal diary (see Diaries of Judith Malina, 1947-1957). Meanwhile, members from several pacifist groups formed the Provisional Defense Committee to aid the protesters and quickly collected funds for attorneys’ fees, the trial and any appeals.
In November of 1955, the protesters went on trial before Judge Hyman Bushel, who displayed the same kind of animosity towards the defendants as Judge Kaplan did at the arraignment. At one point, Bushel even asked the defense counsel if he intended to call Soviet Foreign Minister Vyacheslav M. Molotov as a witness. When the judge made his sarcastic remark, he may not have been aware of the fact that Molotov happened to be in New York on the day of Operation Alert (the infamous Russian was, in fact, in Glen Cove, Long Island at the time of the drill). 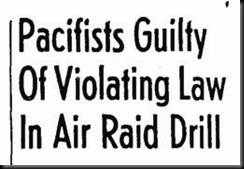 On December 22, 1955, Judge Bushel found nineteen of the pacifists guilty and suspended their sentences because, he said, he did not wish to make “martyrs” of them. He also suspended the sentences of seven others—including Dorothy Day and Judith Malina—who had pleaded guilty. Finally, he dropped the charges against Joan Hamilton who was pregnant, Rocco Parilli who had been arrested by accident and Robert Berk, a student.
Defense attorney Kenneth W. Greenawalt vowed to appeal the verdict stating that the New York Emergency Defense Act violated freedom of religion, speech, assembly, press, petition and equal protection of the laws. The case (and one after it from 1956) was appealed to higher courts, but ultimately it was rejected by the U.S. Supreme Court in 1961. Justice William O. Douglas was the only member of that judicial body to vote to hear the case.
The protests against Operation Alert escalated in 1960 and 1961 until the government—at the behest of the New York City Police Department—decided to discontinue them in 1962. 1961 was the last year the drill was held. The later protests will be explored in later CONELRAD posts.
The names of the defendants from the Operation Alert 1955 protest:

Posted by Bill Geerhart at 5:12 PM

Interesting Article. Hoping that you will continue posting an article having a useful information. Poker Indonesia

The last, most regular component of a drug rehab is the 12-advance gathering. These are normally an on location AA meeting (however it could be a NA, SA, GA or CA

meeting relying on the rehab) which you should go to somewhere in the range of five to seven times each week. You will turn out to be very acclimated with the type of

the AA meeting which is something to be thankful for since you are probably going to be encouraged to go to them when you are released from rehab.

Taking everything into account, these are the most widely recognized components of rehab's treatment model accepting it depends on the twelve stages. I trust this

furnishes you with a structure for understanding what's in store at a drug rehab focus.

I know a mere thank you is not enough to appreciate what you’ve done. But for now, it’s all I have to say!
바카라사이트

Interesting, I saw your article on google, very interesting to read. I have seen this blog, it is very nice to read and has more informative information. Feel free to visit my website; 일본야동
일본야동
국산야동
일본야동
한국야동

A good blog always comes-up with new and exciting information and while reading I have feel that this blog is really have all those quality that qualify a blog to be a one. Feel free to visit my website; 일본야동
일본야동
국산야동
일본야동
한국야동


It’s so good and so awesome. I am just amazed. I hope that you continue to do your work like this in the future also. Feel free to visit my website;
일본야동
일본야동
국산야동
일본야동
한국야동


Wow, amazing blog layout! How long have you been blogging for? you make blogging look easy. The overall look of your site is fantastic, as well as the content! Feel free to visit my website; 일본야동
일본야동
국산야동
일본야동
한국야동

This is an excellent post I seen thanks to share it. It is really what I wanted to see hope in future you will continue for sharing such a excellent post. Call center Software Solution