CONELRAD obtained this response letter (and envelope) dated and postmarked August 19, 1965 sent to Frederick Corzilius by Wayne Phillips (1925-1988), Director of News and Information for the Democratic National Committee from the Corzilius family. In his correspondence, Mr. Phillips clearly references the Daisy ad and Mr. Corzilius’s daughter.

CONELRAD confirmed Mr. Phillips’s position with the DNC by obtaining his entire file from the Lyndon Baines Johnson Presidential Library and Museum. The originating letter in which Mr. Corzilius apparently requested a meeting with the President for his daughter was not found in Mr. Phillips’s papers nor was it present in any of the other DNC materials.[1] 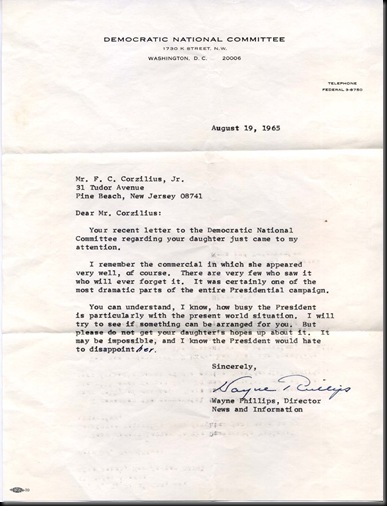 Your recent letter to the Democratic National Committee regarding your daughter just came to my attention.

I remember the commercial in which she appeared very well, of course. There are very few who saw it who will ever forget it. It was certainly one of the most dramatic parts of the entire Presidential campaign.

You can understand, I know, how busy the President is particularly with the present world situation. I will try to see if something can be arranged for you. But please do not get your daughter’s hopes up about it. It may be impossible, and I know the President would hate to disappoint her.

Wayne Phillips in the early 1960s

[1] Per an archivist at the LBJ Presidential Library and Museum the correspondence is not contained in the general DNC files or the files of the then-DNC Chairman John M. Bailey, either (August 21, 2009 e-mail from LBJ archivist to Bill Geerhart).