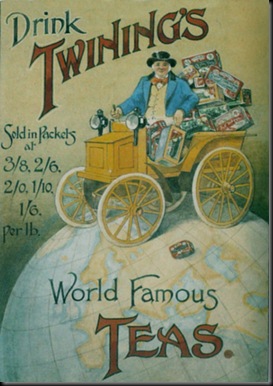 CONELRAD usually sticks to good old American Cold War strangeness, but after reading a news item on a declassified 1950s British government document describing a feared tea shortage after a nuclear attack, we couldn’t resist digging a little deeper. So we contacted the National Archives in London and they were more than happy to provide the entire 1954-1956 Ministry of Food civil defence report (MAF 250/46) to us for an exorbitant copying and shipping fee. After a considerable wait, the strangely packaged ream of paper hit our office doorstep. The sheer size of the package was intimidating, but we quickly cracked it open to make certain that we got every last Yankee dollar’s worth out of our investment. 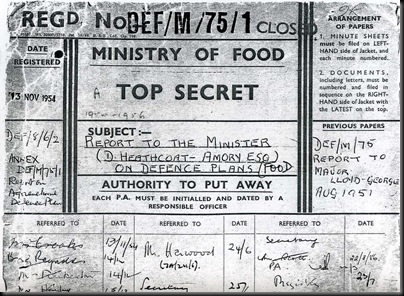 It took us almost an entire day to slog through the enormous document and pluck out any noteworthy (read: amusing) passages, and thankfully there were more than a few laughs to be had. However, excavating these absurd nuggets from the dense verbiage of the voluminous report was not easy. Indeed, the vast majority of the “Top Secret Ministry of Food Report to the Minister on Defense Plans (Food)” is written in a boring, bureaucratic style that all adds up to one big migraine. There is a certain surreal aspect to reading the report that is rewarding – especially if you have seen the British Cold War films The War Game (1965) and / or Threads (1984) and you are familiar with these movies’ depictions of post-attack chaos and the governmental impotence.

Before we get to the gems of the document (including the ominous “Tea position”), it is important to set the stage. The report’s original Top Secret purpose was to provide the Minister of Food (which sounds like an unfortunately named UK chain restaurant) with a status on food defence strategies.

There are many marked-up drafts that constitute the complete record that was provided to CONELRAD by the Archives. It is interesting to examine the evolution of what is described as a report that was the result of a lot of “thankless work” (for what it is worth, CONELRAD thanks any of the blokes still living who slaved over the document). One such draft of the report opens with a bit of stiff upper lip self-congratulation and bureaucratic one-upmanship:

I think it is fitting that on the last day of the separate existence of the Ministry of Food I should submit to you the attached Report on the state of Food Defence Plans. As you will see there are many complex problems ahead and from now onwards they will be handled together with the larger complex of problems arising out of the organisation of agricultural production for war. Plans for integrating the future organisation are complete.

The attached Report represents the results of much thankless work to which the officers concerned have given a great deal of time and thought. It is not unfair to say that in our thinking and planning about this grim subject we are probably ahead of most other Departments in Whitehall. I am sending a copy of these papers separately to Sir Alan Hitchman. 7th April, 1955

Amidst all of the eye-glazing food stockpiling statistics and other data, the following items stood out when CONELRAD fine-tooth-combed the report:

Objective: To be completely ready to maintain supplies of food to the people of the islands, sufficient in volume to keep them in good heart and health from the onset of a thermo-nuclear attack on this country.

Even if such an organisation were ready it could not introduce an effective rationing scheme unless the necessary ration documents had been prepared in advance. Authority to start the printing of ration documents in 1956/57 has been refused. The physical difficulties in obtaining suitable paper are such that, even if authority is given next year and all outstanding points are cleared by then, it is unlikely that printing of the documents can be completed before 1963.

Under hydrogen bomb attack food interests would suffer very severely. Bulk stocks and processing capacity would be likely to suffer a loss of some two-thirds. Wholesale distribution, as at present organised, would suffer even more, some 80%

We can, therefore, say that we can reasonably hope to ensure that people will not starve provided –

(a) the Government gives a lead (i.e. shows by the deployment of resources that special efforts are being made to support the Home Front);

(b) an organisation not only of Civil Servants but of businessmen is built up to function throughout the country. I attach special importance to the regional and district organization; 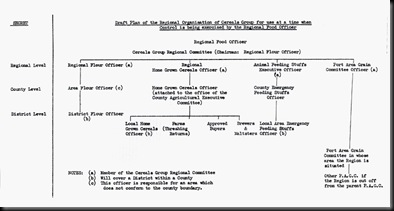 There would be a special plan for dealing with the slaughter of animals affected by radio-activity which could be used for food if slaughtered. This raises questions of precautions against radio-activity for slaughterers and the preservation of carcases which are not needed for immediate consumption (e.g. salting). 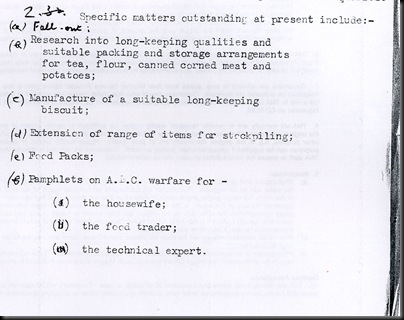 Arising out of the work of the Official Announcements Sub-Committee of the Defence (Transition) Committee draft notices on Emergency Feeding and the Protection of Food from ABC Warfare were drafted in 1953/4 and agreed with the Home Office, the Ministry of Health and the B.B.C. It was also agreed that there should be press hand-outs and B.B.C. announcements about food rationing, other food controls and measures for the conservation of food but these cannot be drafted yet. Press hand-outs and B.B.C. announcements were drafted by the Ministry of Agriculture and Fisheries on a number of subjects; but these are now obsolete because they were drafted before the fall-out from the H bomb was recognised as a practical hazard in future war.

TEA: The tea position would be very serious. With a loss of 75% of stocks and substantial delays in imports and with no system of rationing, it would be wrong to consider that even 1 oz. per head per week could be ensured.

No satisfactory solution has yet been found.

No word on whether the UK ever surmounted their potentially tragic “Tea Gap.” If they did it is no doubt one of the unsung triumphs of the atomic age. 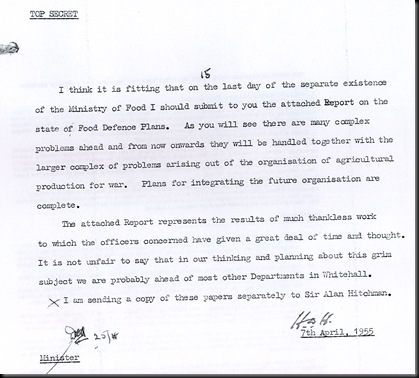 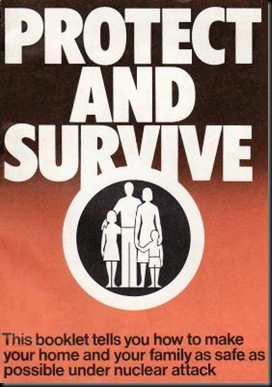 Posted by Bill Geerhart at 8:41 AM

Easy to poke fun, but as one who did plan for an incoming Soviet strike in the UK in the early 1990's, we were very well aware, that there was insufficient food to go around.

It was planned to feed people with cattle cake among other things.

However by then civil defence really had been reduced to looking after a bare bones central government.

It is probably safe to say that in reality, the more people that died in an attack the better.

There simply would have not been the resources to maintain them.

The wounded and injured would have been left to starve, behind barbed wire in camps

It was pretty grim.

If you want to see what it would have been like, I recommend 'Threads'...

I doubt the situation would have been any different in the USA, perhaps somewhere in the bowels of the American government there is a similar memo about coffee or coke.

I believe that cold war is a state of political and military tension after WWII.
Cold War

Searching for the Best Dating Site? Create an account and find your perfect date.