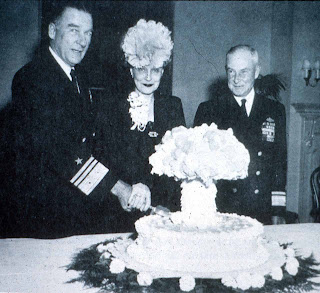 The following is a transcript of the famous Lest the Living Forget sermon written by Reverend Arthur Powell Davies (June 5, 1902—September 26, 1957). Davies, who was the minister of the Unitarian All Souls Church at 1500 Harvard Street in Washington, D.C. from 1944 until his death in 1957, delivered the remarks to his congregation on Sunday, November 10, 1946. His widely publicized remarks were inspired by a Washington Post society page photograph of Operation Crossroads commander Vice Admiral William H.P. Blandy cutting into a cake designed to resemble an atomic explosion. The parishioners of All Souls included many prominent people including Supreme Court Justice Harold Hitz Burton. Justice Burton and his wife happened to be in attendance on the day of the controversial sermon.[1]

I have with me here in the pulpit this morning a page from a newspaper. From a very fine newspaper. It contains a picture—as it seems to me, an utterly loathsome picture. If I spoke as I feel I would call it obscene. I do not blame the newspaper for printing the picture, or the photographer for taking it. What fills me with bitterness is the fact that such an event could take place at all. It is a picture of two high naval officers and a very beautiful lady.[2] They are in the act of cutting what is called an atom-bomb cake. And it is indeed a cake shaped in the form of an atomic explosion. The caption [in the Post’s photo] says it is made of angel food puffs. I do not know how to tell you what I feel about that picture. I only hope to God it is not printed in Russia—to confirm everything the Soviet government is telling the Russian people about how ‘American degenerates’ are able to treat with levity the most cruel, pitiless, revolting instrument of death ever invented by man.[3]

How would it seem in Hiroshima, or Nagasaki, to know that Americans make cakes—of angel food puffs—in the image of that terrible, diabolical thing that brought sudden death to thousands of their friends, and a lingering, loathsome death to thousands of others? It is a crime—a crime against whatever may be left of decency here in America—to do this incredible thing. 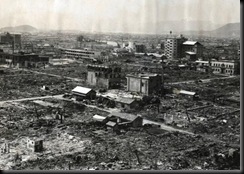 It is the most corrupt and rotten thing I have seen in eighteen years of living in this land that I love [Editor’s Note: Davies was born in Birkenhead, England, a suburb of Liverpool and emigrated to the United States with his wife, Muriel, in 1928]—and which, to me, is the only hope for the human future on this globe. The naval officers concerned should apologize to the armed service of which they are a part, and to the American people. No apology would be sufficient to efface what it may mean to the people of the world.[4]

If I had the authority of a priest of the Middle Ages, I would call down the wrath of God upon such an obscenity. I would damn to hell these people of callous conscience, these traitors to humanity who would participate in such a monstrous betrayal of everything for which the brokenhearted of the world are waiting. But—perhaps fortunately—I have no such authority. And so I only pray that God will give me patience and compassion. That I may be just—and merciful—and humble. And still speak the truth that is in me.


For much more on the Atomic Cake controversy see this post.
The Washington Post article that prompted Davies’s indignation was entitled “Salute to Bikini,” published on page 18 of the newspaper on November 8, 1946.

[2] The woman Davies is referring to Vice Admiral Blandy’s wife. In a November 22, 1946 letter to the editor of the Washington Post, Colonel David H. Blakelock, U.S. Army and Captain Fitzhugh Lee, Joint Task Force 1 wrote, among other things, that “Mr. Davies remarks also did a great injustice to Mrs. Blandy, who was brought up and married and whose children were christened in the same church in which Mr. Davies has but recently become the pastor.” According to Rev. Davies biography, he became the minister for All Souls Church in 1944.

[3] In fact, the photograph was published in Russian newspapers. A November 18, 1946 Washington Post article headlined “Soviet Papers Comment on ‘Atom’ Cake” reported that Izvestia commented that “American ‘atomists’ [would] ‘like to stew a big atomic kasha and make millions of peaceful people bear the consequences.” The Post added that the story was illustrated with a picture of a “portly gentleman in a morning coat cutting a cake.” According to the same article, a Russian trade union newspaper, Trud, referred to Blandy’s infamous dessert as an “atomic cake.”

[4] No apology was ever issued. When the Associated Press asked Blandy about the cake, he responded that he did not wish to “comment offhand.”: “Picture of Atomic-Bomb Cake ‘Obscene,’ D.C. Pastor Declares,” Washington Post via Associated Press, November 11, 1946.
Posted by Bill Geerhart at 12:36 PM

it is good to readaybabg