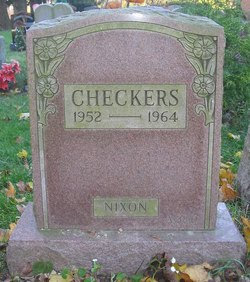 “Someday, we’re going to bring her to the library…”

According to the 501-word New York Times obituary, Checkers, Richard Nixon’s famous Cocker Spaniel, passed away at the age of twelve on September 6, 1964. Sadly, she did not live to romp in the Rose Garden upon her master’s phoenix-like triumph in the 1968 presidential election. And while Checkers may not have a statue in Washington, D.C. (like Franklin Roosevelt’s beloved Fala, see below), 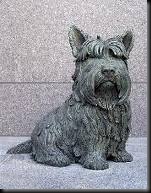 there is a reverence for the pooch in death that is unprecedented in American political history. Strangely enough, the continuing public interest in the deceased canine has focused, to a large extent, on her gravesite.

Indeed, since 1995 (at least), there have been reports of plans to exhume Checkers from the Bide-a-Wee Pet Cemetery in Wantagh, New York and move her to a plot of honor in Yorba Linda, California next to the man she saved from political oblivion.  During an interview on CNN in 2001, the president’s younger daughter, Julie Nixon Eisenhower, made official the family’s desire to transfer her childhood pet (see above quote), but she was vague on details. As of this post, Richard Nixon’s once furry good luck charm is still interred on the east coast. 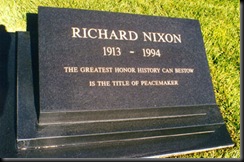 It turns out that the fascination with Checkers’ burial accommodations goes back to the early 1970s. In fact, there is evidence that concern over the maintenance of the dog’s gravesite reached the president himself.

CONELRAD is proud to be the first organization to publish this unusual correspondence: 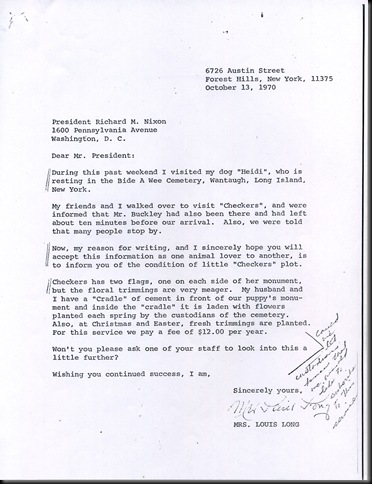 Transcription of above letter including Rose Mary Woods’ margin note:

During this past weekend I visited my dog “Heidi”, who is resting in the Bide A Wee Cemetery, Wantaugh, Long Island, New York.

My friends and I walked over to visit “Checkers”, and were informed that Mr. Buckley had also been there and had left about ten minutes before our arrival. Also, we were told that many people stop by.

Now, my reason for writing, and I sincerely hope you will accept this information as one animal lover to another, is to inform you of the condition of little “Checkers” plot.

Checkers has two flags, one on each side of her monument, but the floral trimmings are very meager. My husband and I have a “Crade” of cement in front of our puppy’s monument and inside the “cradle” it is laden with flowers planted each spring by the custodians of the cemetery. Also, at Christmas and Easter, fresh trimmings are planted. For this service we pay a fee of $12.00 per year.

Won’t you please ask one of your staff to look into this a little further?

Wishing you continued success, I am,

The president’s long-serving secretary, Rose Mary Woods (who was with him during the “Fund” crisis that led to the Checkers speech), replied to Mrs. Long’s letter with surprising promptness on October 22, 1970: 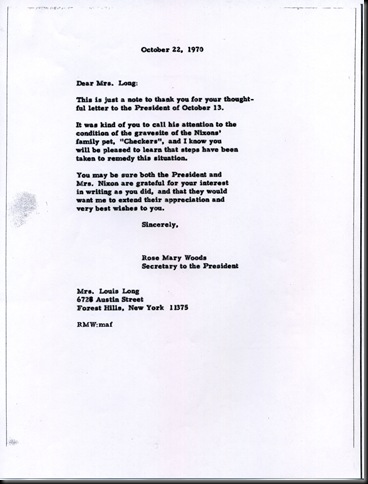 Transcription of above letter:

This is just a note to thank you for your thoughtful letter to the President of October 13.
It was kind of you to call his attention to the condition of the gravesite of the Nixons’ family pet, “Checkers”, and I know you will be pleased to learn that steps have been taken to remedy this situation.

You may be sure both the President and Mrs. Nixon are grateful for your interest in writing as you did, and that they would want me to extend their appreciation and very best wishes to you.

By May of 1971 Checkers’ gravesite was again drawing concern from the public. On June 14, 1971 Ms. Woods replied to a letter from Richard A. Meyer, thanking him for his offer to periodically monitor the beloved pet’s final resting place due to its shoddy condition. This time Woods took additional time to consult with the executive director of the pet cemetery. Both letters appear below: 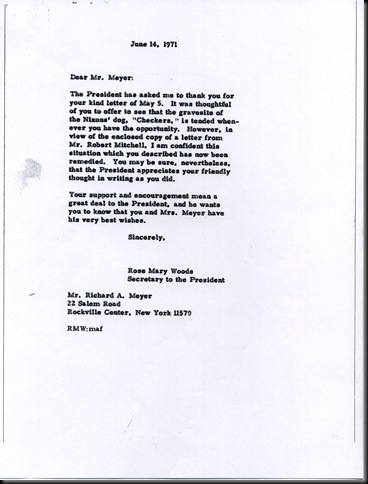 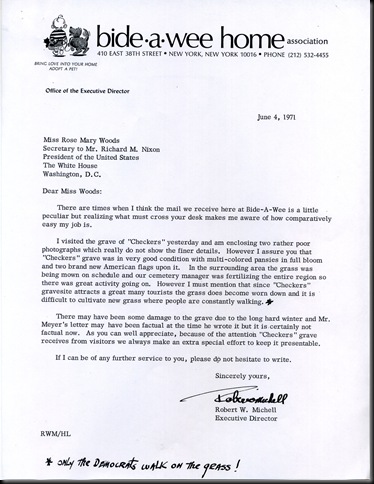 Transcripts of above letters:

The President has asked me to thank you for your kind letter of May 5. It was thoughtful of you to offer to see that the gravesite of the Nixons’ dog, “Checkers,” is tended whenever you have the opportunity. However, in view of the enclosed copy of a letter from Mr. Robert Mitchell, I am confident this situation has been remedied. You may be sure, nevertheless, that the President appreciates your friendly thought in writing as you did.

Your support and encouragement mean a great deal to the President, and he wants you to know that you and Mrs. Meyer have his very best wishes.

There are times when I think the mail we receive here at Bide-A-Wee is a little peculiar but realizing what must cross your desk makes me aware of how comparatively easy my job is.

I visited the grave of “Checkers” yesterday and am enclosing two rather poor photographs which really do not show the finer details. However I assure you that “Checkers” grave was in very good condition with multi-colored pansies in full bloom and two brand new American flags upon it. In the surrounding area the grass was being mown on schedule and our cemetery manager was fertilizing the entire region so there was great activity going on. However I must mention that since “Checkers” gravesite attracts a great many tourists the grass does become worn down and it is difficult to cultivate new grass where people are constantly walking.*

There may have been some damage to the grass due to the long hard winter and Mr. Meyer’s letter may have been factual at the time he wrote it but it is certainly not factual now. As you can well appreciate, because of the attention “Checkers” grave receives from visitors we always make an extra special effort to keep it presentable.

If I can be of any further service to you, please do not hesitate to write.

* Only the Democrats walk on the grass!

Bide-a-Wee must have become more vigilant in their oversight of Checkers’ grave after 1971 because the response from Mr. Mitchell  appears to be the last in the file accessed by CONELRAD at the National Archives. Perhaps someday Checkers will take her rightful place next to President Nixon and receive around-the-clock security. In the meantime, keep off the grass!

To see an article about references to Checkers in the popular culture visit our knol page. 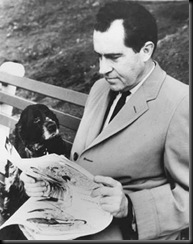 “A Nixon/Checkers Reunion?” Los Angeles Times, April 28, 1997 (article mentions a May 5, 1997 U.S. News and World Report story about a “planned” Checkers move to the Nixon Library)

Most of the blogs pretend themselves as most usable and updated blogs with new information but sometime truth might different. I want to share some facts related to this subject which will help people to enhance their skills.bioresonantie arnhem


I seriously love your website.. Excellent colors & theme.
Did you create this amazing site yourself? Please reply back as I’m attempting to create my own site
and want to know where you got this from or just what the theme is named.
Cheers!