First Church of the Cold War 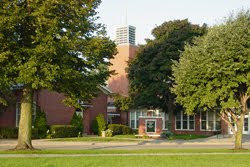 The Strategic Air Command (SAC) Memorial Chapel resides in a shady section of the Offutt Air Force Base in Omaha, Nebraska. The exterior of the building is unremarkable--it looks like an average, mid-century suburban church. It is what can be seen on the inside of this house of worship that makes the SAC Chapel so unique. Specifically, the interior features a series of stained glass windows that serve as a sort of strange religious monument to the Cold War. How did this come about? Read on... 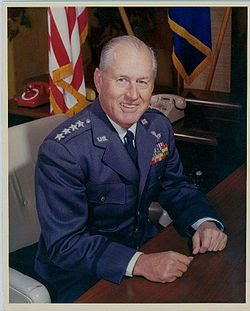 In late 1958, General Thomas S. Power, Commander-in-Chief of the Strategic Air Command, suggested that there be an effort to memorialize personnel who had died in the line of duty. Two programs resulted from General Power's recommendation: 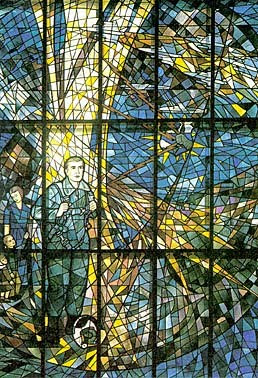 While upwards of $15,000 in collections for the project was taken up from base chapels around the country in May and June of 1959, the Committee for the Memorial Window tried to find a suitable vendor to create the unusual windows. To that end, the Committee, headed by Chaplain George S. Wilson, sent requirements for the project to eight different design firms and asked for preliminary sketches so that a contract could be awarded. In July of 1959, the Wallis-Wiley Studio of Pasadena, California was selected for the job and they did not disappoint in their fine handiwork. Indeed, the creepy Cold War iconography that populates the windows is, to say the least, unsettling. In the typical church, for example, one might expect to see an image of Jesus in the stained glass, but at the SAC chapel, the parishioner is overwhelmed by an airman in his flight suit. Another pane has a red "hotline" telephone. And still another has a mushroom cloud rising from an atomic test in the Pacific. 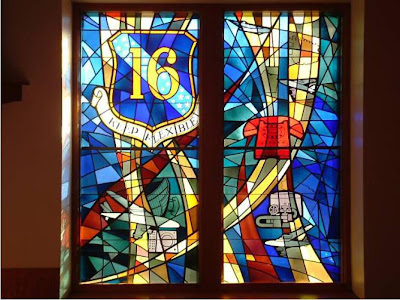 When the Memorial Window was formally dedicated, a special prayer was read that referenced those who had died to "serve the cause of peace." The following are excerpts:


We dedicate these windows to their memory and ourselves to the ideals which they represented. Like them, we stand in the light of God and like them we pray that we may have resoluteness of purpose and courage of conviction to answer the challenge by saying "Here am I! Send me."

May these beautiful windows illumine this Thy house of prayer and the souls of all those who worship here. As Thy light is interpreted through the beautiful colored panes, may the message of sacrificial service, duty, loyalty written by our comrades be a source of continual inspiration. Amen.

Sometime within the next few years, the Cold War Museum will open in the Washington, D.C. area. This museum will undoubtedly have many wonderful exhibits that will educate visitors about this long and tense period of our recent history. But it is hard to imagine any curated display capturing the weirdness of the Cold War quite like the Memorial Window at the SAC Chapel. 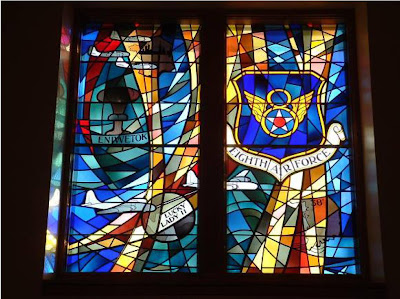 Posted by Bill Geerhart at 7:26 PM


A fantabulous post this has been. Never seen this kind of useful post. I am grateful to you and expect more number of posts like these. Thank you very much