The Nagasaki Atom Bowl of 1946 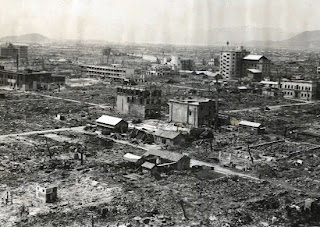 Nagasaki, Japan, a few months before the "Atom Bowl"
On August 9, 1945 the second atomic weapon ever used in warfare—Fat Man, a plutonium fission bomb—was detonated over Nagasaki, Japan. Just three days had passed since the first weapon—Little Boy, a uranium fission bomb—had leveled Hiroshima. It is Hiroshima, though, that still gets “all the press” because it was the first. And being first in the atomic age has its dubious benefits. Most people, for instance, remember that it was the Enola Gay that dropped the first A-bomb, but leave it to the History Channel nerds to know that the BocksCar (aka Bocks Car) delivered the second. And while Paul Tibbets became a household name for piloting the Enola Gay, Charles Sweeney’s name quickly faded from the national memory as the man who flew the second plane. The examples go on, but in one thoroughly bizarre category Nagasaki triumphs over Hiroshima—post-atomic football! On January 1, 1946 occupying U.S. Marines staged the very first (and the very last) “Atom Bowl” amid the radioactive rubble of the runner-up target city.

According to an excellent 2005 New York Times article on the game, the idea came from Major General LeRoy P. Hunt who was the Second Division commanding officer. He wanted an event that would lift the morale of the troops during the holiday season and recommended a football game. Hunt probably favored such a competition because there were quite a few college and professional football stars serving under him. The most talented of these Marines, Heisman Trophy winner Angelo Bertelli and Bullet Bill Osmanski, a fullback for the Chicago Bears, became the captains of the opposing “Atom Bowl” teams: The Nagasaki Bears (Bertelli) and the Isahaya Tigers (Osamanski).

The makeshift gridiron dubbed “Atomic Athletic Field No. 2” was cleared of debris, but because pieces of glass remained, it was agreed upon that the game would be two-hand touch instead of tackle. The bleachers and the goal posts were pulled together from pieces of wood found near the field. Concern about lingering radiation was, apparently, disregarded by everyone.

Mike Bertelli, the son of the Nagasaki Bears captain, told the Times that his father and Osmanski had made a pact beforehand to try and make the game a tie in order to keep things cheerful in the ranks. But, at the last minute, Osmanski could not resist winning and kicked the extra point. The Tigers claimed their victory before a crowd of over two-thousand servicemen and women and a few mystified Japanese survivors.

News coverage of this peculiar new addition to the bowl games appeared in newspapers across America on January 2, 1946. The following is a transcript of just one of the reports that shared space on sports pages that day with the results from the more conventional Cotton, Gator and Raisin Bowls:

Several thousand servicemen and women huddled in the bitter cold on the sidelines of the gridiron, which the Marines carved out of the dust and rubble of this atomic bomb target city, to watch the game.

Osmanski, a first lieutenant in the Marines, scored both touch-downs for the “Tigers” and booted both extra points—all in the second half—after the “Bears” captain, Navy Lieutenant Bertelli, former Notre Dame great, had passed his club to a 13 to 0 lead at halftime.

The Bears’ tallies came on passes from Bertelli to George Pukoski, formerly of Duquesne, and Pat Donat, former Franklin High School (New York) player in the first and second quarters. Bertelli made one conversion good but missed the second. 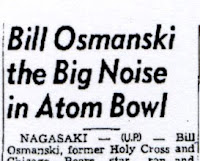 What do you mean?

Enthusiastic words written in this blog helped me to enhance my skills as well as helped me to know how I can help myself on my own. I am really glad to come at this platform. the football brainiacs

Now day, everything is going to find a new but well settled and successful stream for their career. When I came to this blog, I really impressed by all the knowledge points mentioned here. Thank you for this assistance. Cat Bowl

The method of execution is really impressive of writers of this blog. This team does really work hard and brings new information to its readers. I am connected with this blog very long and I am really thankful. pet bowl

So good to seek out any individual with some original thoughts on this subject. 카지노사이트

That is a very good tip especially to those new to the blogosphere.
Short but very accurate info… Appreciate your sharing this one. A must read post.

I accidentally came here while searching and there are a lot of things to see. I'm going to take a good look at the photos and writings that cool my eyes. I look forward to a fun and fruitful story on the blog. Merry Christmas and Happy New Year.파워소프트

I will be sure to bookmark it and return to read more of your useful information. Thanks for the post. I will certainly return. Feel free to visit my website; 일본야동
일본야동
국산야동
일본야동
한국야동

nicely written! I will be reading your articles and using the informative tips. Looking forward to read such knowledgeable articles Feel free to visit my website; 일본야동
일본야동
국산야동
일본야동
한국야동

That's why marketing and advertising that you simply applicable exploration previous to publishing. It will be easy to write down superior write-up that way. Feel free to visit my website; 일본야동
일본야동
국산야동
일본야동
한국야동

A lot of times it’s difficult to get that “perfect balance” between usability and visual appeal. Feel free to visit my website;
일본야동
일본야동
국산야동
일본야동
한국야동

I got so involved in this material that I couldn't stop reading. I am impressed with your work and skill. Thank you so much. Feel free to visit my website;
일본야동
일본야동
일본야동
일본야동
일본야동

I feel extremely cheerful to have seen your site page and anticipate such a large number of all the more engaging circumstances perusing here. Much appreciated yet again for every one of the points of interest. We are really grateful for your blog post. You will find a lot of approaches after visiting your post. I was exactly searching for. Thanks for such post and please keep it up. Great work. I truly appreciate this post. I have been looking everywhere for this! Thank goodness I found it on Bing. You have made my day! Thank you again .This is very interesting content! I have thoroughly enjoyed reading your points and have come to the conclusion that you are right about many of them. You are great . Your site has a great post and text Corona is serious around the world, so be careful with your health and subscribe to it often in the future. 바카라 게임 규칙

Great info! I recently came across your blog and have been reading along. I thought I would leave my first comment. I don’t know what to say except that I have. Good post but I was wondering if you could write a litte more on this subject? I’d be very thankful if you could elaborate a little bit further. Appreciate it! Great ¡V I should certainly pronounce, impressed with your site. I had no trouble navigating through all tabs as well as related info ended up being truly easy to do to access. I recently found what I hoped for before you know it at all. Quite unusual. Is likely to appreciate it for those who add forums or anything, website theme . a tones way for your client to communicate. Excellent task.. 승인전화없는 토토사이트

Way cool! Some extremely valid points! I appreciate you penning this post and also the rest of the site is also very good. Wow! This can be one particular of the most beneficial blogs We have ever arrive across on this subject. Actually Great. I am also a specialist in this topic so I can understand your effort. It’s really a nice and useful piece of info. I’m glad that you shared this helpful info with us. Please keep us up to date like this. Thank you for sharing. 안전사이트추천