THE DAY AFTER: CRITICAL REACTION AND PROMOTIONAL COMMENTARY

“It does not have our blessing. We have not endorsed it whatsoever.”

Much was said and written before and after the November 20, 1983 broadcast of The Day After. Indeed, in the weeks surrounding its premiere, the controversial TV-movie was lauded, pilloried and dissected in an unprecedented flood of commentary. Everyone from President Ronald Reagan to the man and woman on the street weighed in with their opinions.

The following is a healthy sampling… 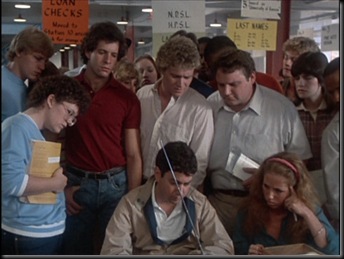 “THE DAY AFTER - Beyond Imagining”

--Original promotional tagline for the film, 1983 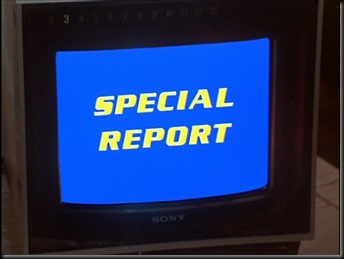 “Columbus Day. In the morning at Camp D. I ran the tape of the movie ABC is running Nov. 20. It’s called THE DAY AFTER in which Lawrence, Kansas is wiped out in a nuclear war with Russia. It is powerfully done, all $7 million worth. It’s very effective and left me greatly depressed…”

“I do not want this film to be a preview of coming attractions. We must not wait until the day after.”

--Lawrence, Kansas. Mayor David Longhurst to the Lawrence candlelight vigil held immediately following the November 20, 1983 broadcast of The Day After

“Meanwhile, no matter what its political content, high earnestness or good intentions, The Day After must be judged as a movie drama. By any conventional standard on this, it is terrible.”

“How do I presume to know what life would be like after such an event? The Day After is, after all, a work of fiction, a monstrous unflinching what-if. But the story is grounded on certain facts-of-life. We live in a land where, for example, ICBMs are quietly canistered in cornfields up your neighbor’s farmstead. We know from extensive government literature what these weapons can do and the strategic scenarios designed to use them.”

“Peyton Place with a nuclear explosion…”

--Unnamed UK Defence official as quoted in the Times of London, December 11, 1983

“A $7 million contribution the faltering campaign against the deployment of the Pershing II.”

“The generally shabby quality of The Day After is of major concern because, rather than startling audiences into a new awareness, it is just as likely to anesthetize them with mediocrity.”

“In particular, since my dear friends at ABC have made a TV movie very rightly describing the terror of an atomic attack on America, perhaps they might consider something else. Perhaps they might make a TV movie about why the people of the United States face such a dreadful risk. They might make a movie about what life in the United States would be like if we lived under Soviet domination.”

“The Day After…is that rare made-for-television movie that comes to grips with a vital issue and deals with it in a forthright and uncompromising manner.”

“Whether The Day After is dramatically good (which it is) seems almost irrelevant compared with the message it pounds home. Because of its subject and potential audience via TV on Nov. 20, it may be the most important movie ever made.”

“I think this film presents a very simple minded notion of the nuclear problem.”

“The film is using theatrical TV film form and thus poses the question as to how we are supposed to differentiate between this film (and its subject) and all the countless other films using the same structural and psychological methods of presentation—such as Dallas, Winds Of War and Kojak. Can we honestly be certain, that there is not a confusion of emotional demand and response here?”

“The film is a vivid and dramatic portrayal of the fact that nuclear war is simply not acceptable.”

“(Watching The Day After) could lead to a distortion of understanding of the need for responsible action to meet the challenge of the Soviet Union on a broader basis.”

--Former President Gerald R. Ford (explaining why he would not view The Day After), November 20, 1983

“Even on the most indulgent view of it in cinematic terms, it is the veriest trash—composed almost entirely of verbal and visual clichés, the acting is dreadful and its most striking single image—a vast panoramic shot of wounded and dying people waiting hopelessly for succour—is lifted straight from Gone With The Wind. All it can do is soften a few more heads, increase the emotional content in an argument already over-supplied with it, and induce nightmares in the more impressionable members of the audience.”

“As cliché-ridden a film as ever insulted its subject…”

“It was a lot worse than I thought. I thought the movie is being used by the left—by peaceniks and the Cranston campaign. We believe the best way to avoid nuclear war is peace through strength.”

--Paul Newman discussing The Day After as quoted by Mark Gerzon in the Times of London article ‘Watching the World End,’ November 7, 1983

“I’m an Air Force veteran and it scared me, it hurt me to see kids getting hurt. In the service you tend to think about something happening to you. You don’t think that much about anything happening to housewives hanging out the wash and kids playing in the yard, and the show makes you think about that part.”

“The movie wasn’t as scary as I thought it would be, but it was scary. In horror movies, people just get killed and that’s it. But in this movie they had to go through all the aftereffects. I think I’d want to die instantly.”

“I guess I was waiting for it to knock me down. After all the talk and buildup with people saying you shouldn’t let your kids watch it and all, I guess I expected a lot more.”

“Unfortunately, this film is giving credibility to a political philosophy that Americans should close their eyes to reality and appease the Soviets.”

“By European standards, The Day After is extremely tame in its depiction of the effects of nuclear attack on the survivors, and often loses its pace and tautness in order to incorporate lengthy dialogue between the principal characters. It may be that this heavy dose of traditional soap opera form, familiar to the audiences of Dallas or Coronation Street, actually carried the message of about the horror of nuclear weapons more effectively to the mass audience.”

“But were it not for all the hoopla and present political climate, The Day After had very little else going to stand alone as a theatrical pic (it was shot on 35mm film). The acting was generally unspectacular, the special effects excellent for television, but only passable for the big screen and the ending something of a non-event.”

“The network’s notions of storytelling are not mine. Ordinarily, on a TV movie a director makes his cut and leaves. I had no intention of doing that, so I stayed and fought. I lost some battles, and I gnash my teeth when I see parts of the film. Overall, though, the movie does the job it was meant to do. I never deluded myself that I was making a work of art. I look on the movie as a giant public-service announcement.”

“Whatever the ultimate effect of The Day After, it cannot be said that the film has enhanced the image of American women. Of the five identifiable women, two (doctor's wife and young bride) were solely concerned with sex and procreation, the third carried the theme a step further, delivering her baby on camera, the fourth became hysterical and was carried to safety and the fifth was a ministering angel who mopped the hero's brow and fed him oranges before succumbing, unaccountably, to meningitis. Nowhere in the film was a woman shown competent and self-reliant, able to deal with impending disaster in an adult fashion. This cruel stereotyping, unnoted by commentators, may well have more harmful and lasting effects than the much-touted adverse reactions to the horror scenes.” 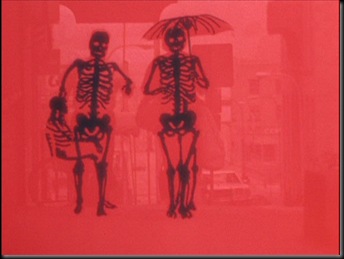 Posted by Bill Geerhart at 5:10 PM

Wow. The movie got some harsh reviews. I remember the controversy surrounding the movie. I had just turned sixteen when it aired. I watched it with my parents and yeah, the movie scared the hell out of me.

We had a nuclear holocaust party.

A group of us techies, with some visitors from England. There was a lot of black humor bandied about all evening.

The most frightening thing about the video-cast was the 30-45 minute special round table discussion. All I remember is the guy who headed a group called Accuracy in Media, who kept re-hashing the argument about how life would have been if we had no nuclear weapons and the commies took over.

The supposed conversation was just people representing fixed points of view talking past each other.

No body said anything about the red skeletons.

Wish there was archive video of that session. It was a snapshot of political history ca. 1980.

There is a clip here: http://www.youtube.com/watch?v=uGGAFRP1Su0

That’s why marketing and advertising that you simply applicable exploration previous to publishing. 야한동영상

I want to say thanks for beautiful blog sharing with us. Your blog really great resource to update my knowledge 한국야동닷컴

you have done a great job. I will definitely dig it and personally recommend to my friends. I am confident they will be benefited from this site 중국야동넷

Software Recommendation platform said...
This comment has been removed by the author.
November 20, 2022 at 11:23 PM