THE BOMBER AND THE MISSIONARY: Another Unusual Hiroshima Reunion 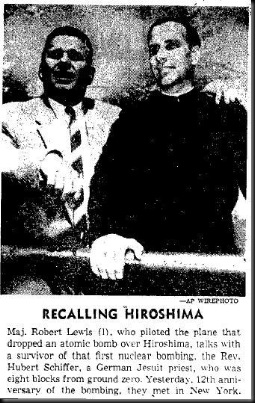 Last month we posted the story of how Robert Lewis, the co-pilot of the plane that dropped the first atomic bomb used in warfare, met a Hiroshima survivor named Reverend Kiyoshi Tanimoto on live television in 1955. This month we bring you the tale of another unusual Hiroshima survivor reunion also involving Mr. Lewis.

THE MIRACLE OF THE NOBORI-CHO MISSION

On the morning of August 6, 1945, Hubert F. Schiffer, a thirty-year-old German Jesuit priest, was sharing a breakfast of rations with his fellow priests in the Society of Jesus mission house in the Nobori-cho section of Hiroshima. According to John Hersey’s book, Hiroshima (Knopf, 1946; 1985), after their meal, the men disbanded to tend to other business in the house. Schiffer was in his room writing at 8:15 a.m. when the Little Boy atomic weapon detonated at 1800 feet above the city.

Amazingly, the mission house, which was approximately eight blocks from the hypocenter (ground zero) of the explosion, did not collapse.  It had been “braced and double braced” by a cautious priest named Gropper who had been worried about earthquakes. Gropper had since departed the mission, but his home improvement efforts had undoubtedly helped save the lives of Schiffer, his three brothers of the cloth, and several other people who were sharing the same roof.* 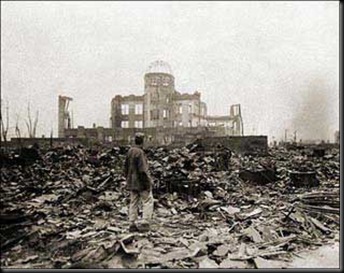 But contrary to some popular accounts of the “miracle” of the Hiroshima mission house, the residents did not escape the atomic explosion completely unscathed. Schiffer sustained a serious cut above his left ear and one of his colleagues, Father Superior LaSalle, had his back sprayed with tiny shards of shattered glass. Father Wilhelm Kleinsorge, who was only slightly injured, stemmed the bleeding of Schiffer’s still-spurting wound with a roll of bandages that had been dropped off at the house only a few days before by a local doctor. It was the quick thinking of Kleinsorge and the selfless aid of the other survivors that allowed everyone to escape the grounds of the mission before it went up in flames.

After fleeing the burning neighborhood, the residents** of the mission made their way to Asano Park near the Kyo River. It was in the park, surrounded by hundreds of other wounded refugees, that Father Schiffer, who was weak and still bleeding, remarked: “It is as if I were already dead.” Kleinsorge placed more bandages around Schiffer’s wound and then took him to higher ground where he tilted his head in such a position that the bleeding eventually decreased.

Not long after the respite in the park, Schiffer and LaSalle were carried on stretchers to a boat that took them across the river. From the other side of the river, they were carried to the Jesuit Novitiate in Nagatsuka, about three miles from the center of Hiroshima. As luck would have it, Pedro Arrupe, the rector of the Novitiate, had once studied medicine and was able to clean the wounds of the two priests. Both men survived. Father Kleinsorge remained in Japan for the rest of his life and lived until 1977. He died in a house in Nagatsuka near the Novitiate.

Five years after his atomic ordeal, Father Schiffer began attending classes at Fordham University in New York City. At some point, for unexplained reasons, he decided that he wanted to find the “pilot” of the Enola Gay. It is not known why Schiffer settled for meeting the co-pilot, Robert Lewis, rather than the pilot, Paul Tibbets, but it may have had something to do with convenience—Lewis lived and worked not far from the university and Tibbets was still in the military. Evidently, this first meeting was not covered by the press, but Schiffer later told a newspaper that he and the airman had become “fast friends.” 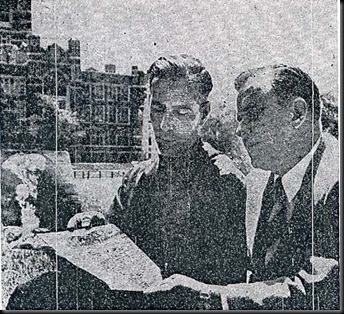 On August 6, 1957 the “fast friends” reunited again—this time for the benefit of the media. The next day’s edition of the New York Times headlined its coverage “Hiroshima Flier and a Survivor Meet Again on Bomb Anniversary” and included a photo of the pair looking over some photos of mushroom clouds (reliving old times?). The meeting took place on the Fordham campus where Schiffer was finishing up his doctorate degree in economics.

If this story was not peculiar enough, the divergent attitudes expressed by the two men on the subject of nuclear weapons takes it to a whole new level of strange. The priest told the Times reporter that “Since the Soviets are known crooks—and we have ample proof of that—I would drop the bomb first if war started.”
Ironically, the veteran of the world’s first A-bomb mission disagreed with the holy man’s notion that the United States should be the first to use the bomb in a war with Russia. Lewis stated to the Times that atomic weapons “should never be dropped unless as a last resort, and then only on military targets.”

Father Schiffer went on to teach economics and write a book about the Japanese banking system. He also lectured to civil defense groups in the United States offering himself up as an example of the possibility of attack survival. He died in Frankfurt, Germany on March 27, 1982. Throughout his post-atomic life he submitted to regular check-ups and apparently escaped the radiation curse that afflicted so many other bomb survivors.

Robert Lewis, a successful businessman and sculptor, gradually became more outspoken on the subject of nuclear weapons. Towards the end of his life he publicly embraced the goals of the freeze movement. He died not long after Father Schiffer on June 18, 1983.

Considering that Hiroshima had a population of 240,000 people before 8:15 a.m. on August 6, 1945, the odds of Robert Lewis meeting two survivors with an intimate bond between them is beyond our calculation. But he did. It was Reverend Kiyoshi Tanimoto, Lewis’s awkward “co-star” on This Is Your Life, who helped save Father Schiffer’s life by ferrying him across the Kyo River in the aftermath of the bombing. Tanimoto’s tireless efforts to help refugees after the attack are chronicled in Hersey’s Hiroshima. The wounded priests were just two of the many lives he touched in the hours and days after the explosion.
We are left to wonder if Lewis knew of the amazing tie between his two survivor friends. 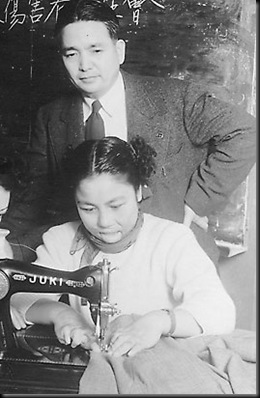 ** One of the members of the mission house did not proceed to safety. After surviving the initial blast, Mr. Fukai was apparently so distraught over the attack and the deaths of his countrymen that he walked into the flames to die.
Posted by Bill Geerhart at 9:48 AM

Professionally written blogs are rare to find, however I appreciate all the points mentioned here. I also want to include some other writing skills which everyone must aware of.bioresonantie arnhem

wordpress beginners tips and tricks so visit this
Website
www.techontamil.blogspot.com

Thanks for sharing all this information in blog and really loved this blog . I wrote a blog for calcium tablets for pets please check it out .