CONELRAD obtained this Time magazine response letter dated December 8, 1964 from Fred Corzilius in the mail on September 24, 2009. Fred wrote in his accompanying cover letter that he found the correspondence in an “old bible” subsequent to Bill Geerhart’s interview visit with the family on September 12, 2009. Mr. Corzilius did not include the photographic print that was enclosed with the Time letter because CONELRAD already has a copy of the issue for which the print was used. He did add, however, that there was a code on the back of the Time-issued print: “T680.” CONELRAD confirmed with the Corzilius family that the originating letter to Time (which we do not have) was written by Fred’s mother and Monique’s grandmother, Alice Marie Corzilius.

It should be noted here that when Geerhart visited Fred and Monique Corzilius he noticed that in addition to other Daisy clippings, they had two copies of the Time magazine with the Daisy Girl on the cover. 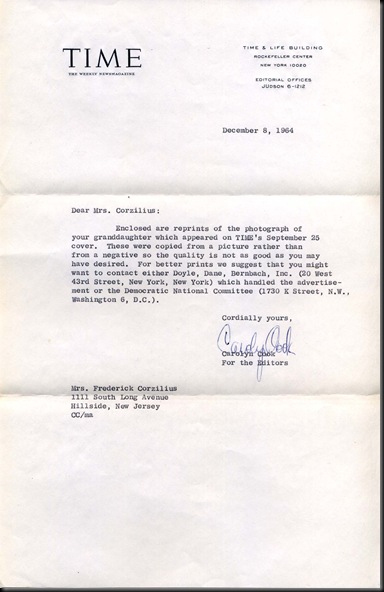 Enclosed are reprints of the photograph of your granddaughter which appeared on TIME’s September 25, 1964 cover. These were copied from a picture rather than a negative so the quality is not as good as you may have desired. For better prints we suggest that you might want to contact either Doyle, Dane, Bernbach, Inc. (20 West 43rd, New York, New York) which handled the advertisement or the Democratic National Committee (1730 K Street, N.W., Washington 6, D.C.).

Carolyn Cook
For the Editors