In the late fall of 1961, Twilight Zone creator Rod Serling was a guest on Bob Crane’s popular Los Angeles radio show. Crane, who would go on to television stardom on Hogan’s Heroes, begins the discussion about the famous Twilight Zone episode, The Shelter (original air date September 29, 1961) in a serious manner. By the second clip (below), however, his more familiar sense of humor surfaces.

It is interesting to hear Serling’s thoughts on what was then a very controversial subject—the ethical dilemma of private fallout shelters. Indeed, at the outset of the interview, Serling, who wrote the episode, reveals to Crane that within two days of the broadcast, the network had received 1,300 letters and cards. 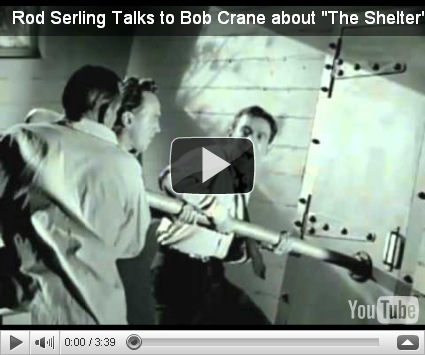 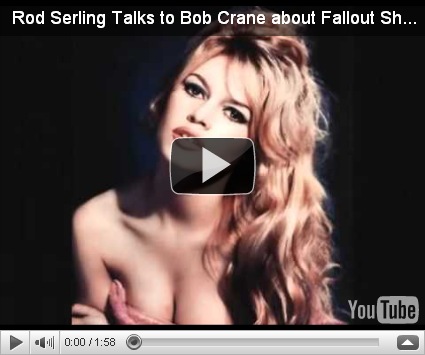 The entire episode of The Shelter can be viewed on the CBS video site for free.

In 1970 Crane, who was infamously murdered in 1978, guest starred on an episode of Serling’s Night Gallery series… 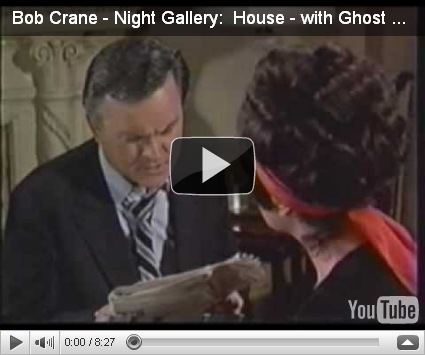 Posted by Bill Geerhart at 8:39 AM

Thanks for the clips. I knew that Crane had a hit radio show in LA pre;"Hogan's Heroes." Check out the 2000 film "Auto Focus," that starred Greg Kinnear as Crane. Very watchable film. Interesting that Crane did a guest shot on "Night Gallery," with Jo Ann Worley ("Laugh In"), John Astin and Victor Buono. Intriguing casting on that show for sure.

I have posted this inquiry many times on Conelrad, and now I try Conelrad Adjacent:

Around 1961, in Dallas Texas, at a shopping plaza. There was an egg-shaped, re-fabbed fall-out shelter resting on a trailer behind a parked pick-up truck. The shelter had two snorkels projecting straight up from its center, and an angled shaft terminating in a door at its end. It was a sales promotion. You bought this thing, they delivered it after you dug a hole in your yard to accommodate it. It had just enough room for two people to sleep on side-by-side bunks, and a can in the center to poop and pee in (the shelter on display had windows in its hull). The thought of having to remain trapped in this tiny egg-shaped space with a can full of poop and pee between the two cots, for six weeks was too horrific a concept for me to deal with.

Does anyone remember seeing a similar display or sales pitch or one of these things?

Did anyone ever buy one?