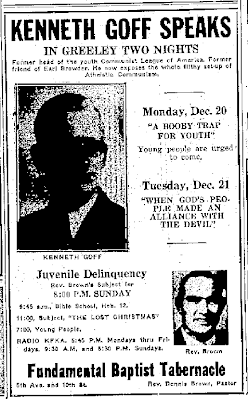 Kenneth Goff (1915-1972) was a “reformed communist,” Baptist minister and a prolific “anti-Red” pamphleteer during the mid-20th century.  The following are some of his greatest literary hits as selected from the CONELRAD book shelf. 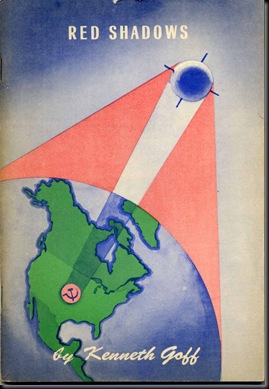 In Will Russia Invade America? (1951), the author envisions the nightmare scenario of the White House being turned over to the Communists:


Nearly all the leading office-holders, including members of Congress, the 48 governors, and the President of the United States, would be arrested, tried and liquidated by the revolutionary committee as enemies of a workers’ state. The White House would be turned over to the Red premier, who likely would be either Eugene Dennis or William Z. Foster. A politburo and a national committee would be established, to carry on the Federal affairs; and to appoint District Commissars over each Soviet who would in turn appoint the rulers of every community. 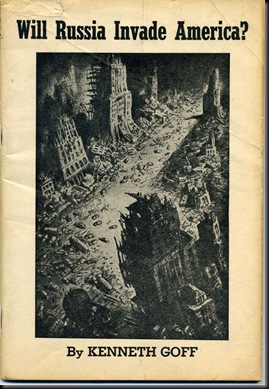 In 1948’s Red Betrayal of Youth, Goff rails against Frank Sinatra, Robert Mitchum and Be-Bop! If the Sinatra excerpt piques your interest, read the CONELRAD review.

One of the outstanding young Reds in Hollywood is Frankie Sinatra, the young man who expects every young maiden to swoon at the sound of his rasping voice. Yet behind that Dr. Jekyl voice is the voice of Bloody Joe enticing our youth into his deadly Marxian philosophy…

Of late this young Red punk has been touring the country swooning bobby soxers with his baritone voice while he tells their parents how to vote. He appeared before 16,000 left-wingers in Madison Square Garden last year at the opening of a nationwide campaign by the Communist Party and the New Deal’s ‘Russian Firsters’ to capture the veterans’ votes.

Frank Sinatra, defiant in bow tie, demanded freedom for the Chinese; a campaign against the Spanish Government; and public recognition of the political possibilities of radio crooners. While Sinatra and others demanded the overthrowing of Franco, Red Fascists passed out handbills in the crowd which read, ‘Veterans—Join the Communist Party…Our party stands for the ownership and control of the nation’s economy by the workers and farmers.’

Through this one performance alone any intelligent person ought to be able to see how ‘Red Frankie,’ with his gentle purring voice is swooning the youth of America into the arms of atheistic Communism. 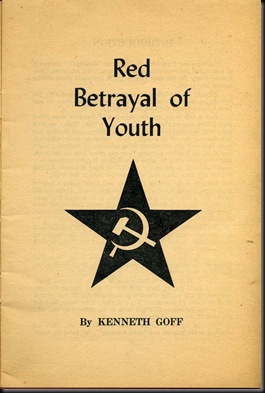 Did we mention Kenneth Goff was a virulent racist? 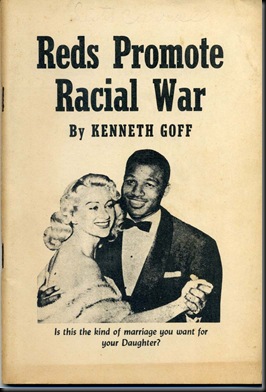 It takes a special kind of paranoia to question Richard Nixon’s anti-Communist credentials, but Goff does just that in his beyond-crazy 1958 pamphlet Reds Promote Racial War… 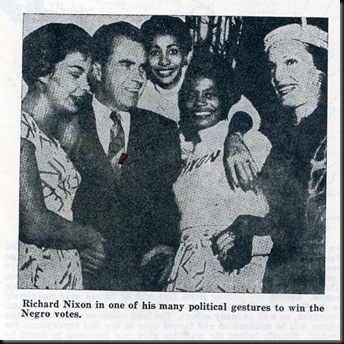 In the image below, the author anticipates the post-invasion “Negro Communist Soviet” that might be governed by singer Paul Robeson: 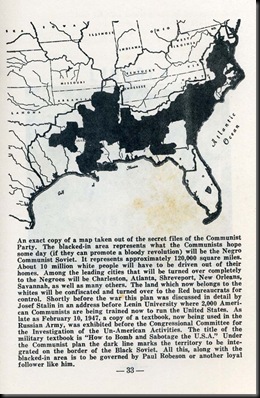 In 1962’s Red Tide, Goff pushes the target date for the Soviet invasion of America back to 1975. To read more see CONELRAD’s review. 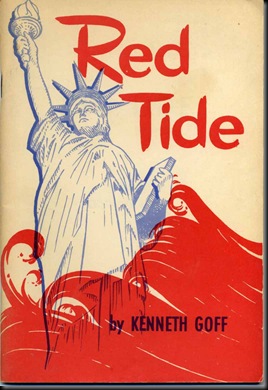 Kenneth Goff wrote many other psychotic screeds and gave numerous lectures before collapsing on a Chicago street corner at the age of 57 on April 11, 1972. His obituary notes that he had “tangled” with people such as entertainer Steve Allen and U.S. Senator John A. Carroll during his long anti-Communist career. According to the same obituary published in the April 13, 1972 edition of the Greeley [Colorado] Tribune, Goff also waged a war against the fluoridation of water in Cortez, Colorado in 1960. Goff was a widower who later divorced from his second wife. The obituary states that Goff is “survived by three small children of the Denver area, two brothers and a sister all of Wisconsin.”
Posted by Bill Geerhart at 2:34 PM

Say what you will about living under Paul Robeson's iron hand, no matter what commie dictates he imposed on us, he would have sounded great doing it.

And how...they've only got Marx and Lenin, we've got Robeson and Sintra. LOL!

It is worthwhile reading this blog. I was searching such kind of blog for a long time but now I think I got a blog of my interest. I am thankful for these all suggestions mentioned under this blog.bioresonantie haarlem

Happy to found this blog. I have some facts related to this blog and I would like to share with all its readers. Definitely it is going to help everyone and aware people with some more knowledgeable points.bioresonantie haren


We are specialists in providing Croydon minicab and airport transfers that are fast and reliable.
We offer cheap taxis especially in the Croydon area 24 hours a day, 7 days a week and 365 days a year.