Red Subscription: The Unexpected Delights of the Daily Worker 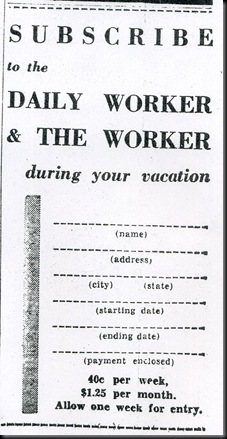 The Daily Worker newspaper began publication in 1924 and by the dawn of the Cold War it was virtually synonymous with the Communist Party of the United States. Indeed, in the 1950s merely accepting a gift subscription of the DW was probably enough to earn you an FBI file. Such a “dangerous” publication has long intrigued us, so we were delighted to learn that UCLA’s Charles E. Young Research Library has much of the newspaper’s back issue catalog on microfilm. Since there is no search engine or index to the Daily Worker, we did things the old fashioned way and flipped through some random issues from the late 1940s to see what all the fuss was about. 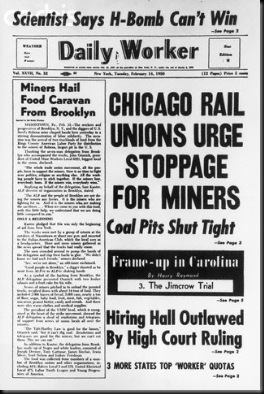 As one scrolls through old issues of the Daily Worker on microfilm, one thing becomes apparent almost immediately: The major news content of the paper is not what is most interesting to today’s reader. In fact, the large-type headlines railing against social injustice and capitalistic corruption are just distractions on the way to the truly interesting and ridiculous features in the publication. The following are some of the highlights: 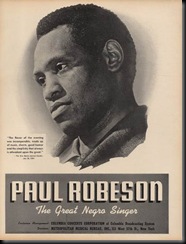 If you thought the Daily Worker was supported solely by the Party and Moscow, you would be wrong. The issues from the late ‘40s have many ads for left wing films, concerts (Paul Robeson), record albums (Paul Robeson again) and even electrolysis treatments and clothing stores (for the well groomed and well dressed Communist).

Yes, that’s right, SPORTS! Because, apparently, even the most hardened radical dedicated to the violent overthrow of the government of the United States needed to know the latest Yankees scores. To satisfy this seemingly incongruous desire, the Daily Worker ran a regular column by Bill Mardo called “In This Corner.” 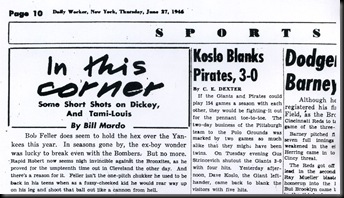 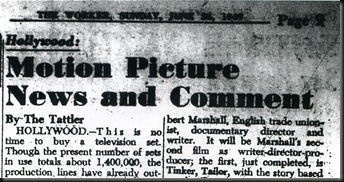 Perhaps the most surprising regular feature that we noticed in the Daily Worker was a column datelined Hollywood and written under the byline of “The Tattler.” To be sure, this column was industry gossip that only a Communist would find interesting. No salacious scandal here, just news of a new Paul Robeson (!) film, an attack on Al Jolson for trying to pitch a minstrel show to a television network and a blurb about a film entitled I MARRIED A COMMUNIST having finished production. Because of the limited text, it is difficult to tell whether "the Tattler" was anticipating this movie to be a leftist rom-com or a Red Scare abomination (it turned out to be the latter, though not without its share of laughs).

The most entertaining recurring column that we found was—hands down—the “Movie Guide” in which the entertainment staff of the paper picked and panned films in (then) current release. In the August 4, 1946 issue, the recommended movies included such titles as HELLO MOSCOW, HYMN OF NATIONS and LIBERATION OF EUROPE. On the other end of the spectrum, in the June 28, 1949 column, the following films received negative capsule reviews in a style worthy of a Red Leonard Maltin:

THE RED MENACE. A stoolpigeon’s view of Communism. 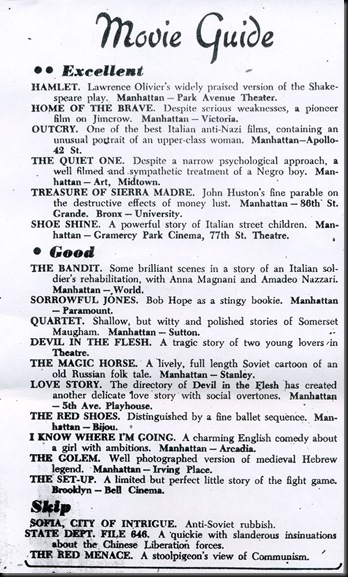 The Daily Worker was published for decades and a version of it continues to this day under the banner of the Peoples Weekly World. A quick review of the 2010 model confirms what we suspected: It’s a bore compared to the classic (and not one mention of Paul Robeson). 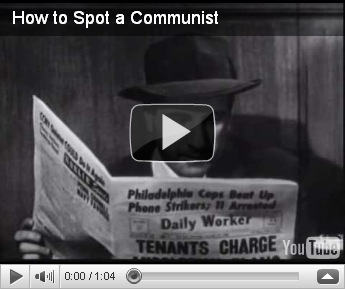 Posted by Bill Geerhart at 7:36 AM

The corpus of the essay must connect all loose ends of the paper in the corpus, reformulate the thesis and end with a bang. The panel should present arguments and evidence to prove the thesis.
Readers will end up satisfied when they know that they have learned something new from your essay and that they have spent a lot of time doing so. Remember that readers may not understand the topic as well as you do when writing an essay, so organize your paragraphs in a way that is best for readers "understanding.Students seeking essays online
Writing an academic essay means designing a coherent set of ideas and arguments. Essays are linear in that they offer one idea after the other and present their ideas in the order they make most sense to the reader. Serious authors are very technical when it comes to organizing argumentative essays.
The perfect essay should cover a wide range of material, take into account all viewpoints, and use quotations from a variety of sources. A typical essay contains many different kinds of information that are in specialized parts or sections.

Country of Origin: The Shih Tzu, also known as the ‘Chinese Lion Dog’, ‘Chrysanthemum Dog’ (because its face resembles a flower),
shih tzu puppies for sale near me
buy puppy online
shihtzupuppies-home-blogspot have somrthing to show here

Really nice style and design and excellent content , nothing at all else we need : D. realme 8 pro 5g price in bangladesh

I see that you are using WordPress on your blog, wordpress is the best.*:~-” officialbellybuttonrings.com